A Batch a Tepache

Ever since I first read of it in The People's Guide To Mexico, by Carl Franz and Lorena Havens, I've long been curious to try tepache, a fermented pineapple "beer", made from the rind and a little of the flesh of the fruit. Piñas are relatively cheap here, I'd bought one on two occasions, but lack of time prevented me from trying this traditional Mexican home brew.
Last week, on my second fresh piña, I had the time, the recipe and the inclination. 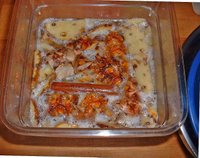 The recipe was from the cookbook, Mexico—The Beautiful Cookbook.

• Wash a medium to large pineapple in clean water, but without disinfecting it. Cut away the rinds, discard the crown (top) and leave a little flesh on the rinds.
• Chop very coarsely, and place in a non-corrodible container with a lid.
• Cover with 8 cups of pure water, a 3- inch piece of cinnamon stick, 4 whole cloves and 20 oz of piloncillo or dark brown sugar. Stir gently, cover, and let set in a warm place for 48 hours.
(See photo above, right)


• At that time, strain the tepache back into the container, add 4 cups of pure water, and allow to set for 8 hours. 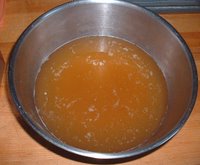 • You may now pour it over ice and enjoy. I found this batch to be a little sweet, and I preferred it with a squeeze of fresh lime. 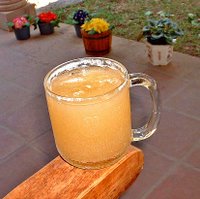 I find that for me, it goes best with a Veracruz cigar, while sitting on the porch, admiring the view. It's also excellent with comida picante.
Posted by Don Cuevas at 6:15 AM 2 comments:

The Sons of Mariscos Return; Parte Dos: The Encounter 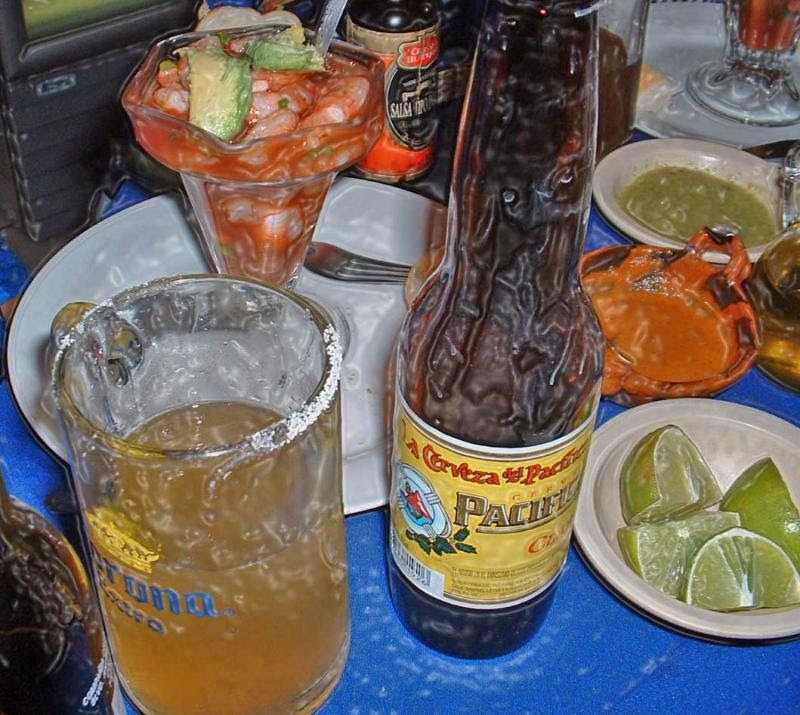 Susan and I were in Morelia again yesterday, enjoying the warm weather, while pursuing Health, Truth, Shopping, and a Good Coctel de Mariscos.

After satisfactorily checking on the first two,
we went, in a very good mood, to lunch again at Mariscos El Delfin, which is situated on the south side of busy Ave. Lázaro Cárdenas, between Águstin Melgar (La Migra about 1/2 block away) and Ave Colegio Militar. It is next to a parking garage. It is an open air mariscos stand, with high stools for the patrons. You can lean on gleaming white tile counters while you consider the short but tempting menu.
Photo actually taken in Cuernavaca

The specialty is seafood cocktails, but they do also have a Caldo de Camarón, which we have not yet tried. There are cups of ceviche, also untried by us, and tostadas de marlin. Some sort of meaty burrito was the special of the day, but I don't go to a marisquería to eat burritos.

We knew we wanted a "Chavela", an very large beer-type goblet, filled with delicious sauces, cilantro, avocado, onion, and most importantly, large cooked shrimp, slices of octopus, and (we think) raw oysters, but the last item we skip, I having had a very bad run in with their cousins of the Gulf of Mexico, back in March, 1980.*

With this meal, we ordered the classic beverage, other than beer, Fanta Naranja.

As we waited our brief wait, several friendly people came out from nearby and engaged us in conversation on the merits and potency of various bottled salsas picantes, all nicely lined out on the counter, awaiting our selection. I like to watch Estela assemble the cocktail: a slug of what appears to be broth or a simple syrup, a big glug of dark, ketchupy but thinner than ketchup sauce; generous measures of the desired mariscos, 2-3 slices of avocado, onions, cilantro worked in there somewhere (they don't put chopped green chiles in there, as far as I know.), then a sprinkle of a special house infusion of spices in vinegar, including dried chiles and bay leaves; now, the freshly squeezed juice of a lime. ¡Listo!

We savored the fresh, tangy cocktails, and other friendly young men came out from nearby, and we chatted in English as well as Spanish, as they obviously wanted to practice English on Real Americans. ;-)

Soon, Estela undid the latch of the side door to the stand, and a tall, handsome man came it. He greeted us with smiles. Soon, introductions were made all around: he is Juan Manuel, Estela's husband. The first man was his brother, the young man speaking English with us is his nephew, and the other jóven was one of their sons.
We had a very pleasant and friendly time discussing the life here, work, and such like.

When we paid (under $150 MXP for both of us), Juan Manuel asked Estela to make up a couple of tostadas de marlín, so that we could try them, on the house. They were indeed delicious, and even better than the marlin we tried at our favorite, large mariscos place in Pátzcuaro.
We departed, and I promised to return the next time with my camera, so that I could make them famous among the digerati. (The camera was actually in the car, 12 hot blocks away, but we had to go pursue Shopping.)

We are now firmly loyal customers of Mariscos El Delfin.

*On a later visit, I asked Estela what the clear liquid was she poured into the coctel glasses. She told us, "Licor de ostiones."
So, all along we'd been eating oyster juices, but without any harm to us.
Posted by Don Cuevas at 8:05 AM No comments: