Sometimes cooking gets out of hand and midway, we get that sinking feeling that we wish we'd made a sandwich instead. Thus it was the other day, when we ate at a much later than usual hour, at about 5:30 p.m. The reason was The Caldo de Pescado From Hell.

I'd wanted fish for our comida, so late in the morning, we stopped at a Pátzcuaro pescadería where I discussed the options with the nice lady there. I wanted filets, but no boring basa nor any blah blanco de nilo. (tilapia.) I ended up with an expensive huachinango of around less than a kilo in weight.


The lady said she'd filet it for me at no extra charge. As the fish was solidly frozen, I should come back in 1 1/2 hours for it. She also encouraged me to use the bony parts and the head to make a rico caldo. It cost me $91 pesos, about $6.75 USD.

When I returned to pickup my purchase, I was dismayed to see that there were only two very small filets and a bony carcass.

I was determined to get the most out of my purchase, which to me meant using the bony parts for a Caldo and the two filets in another dish.

I turned to a favorite Mexican cookbook, México The Beautiful Cookbook.

First, the Caldo. On page 72, I found a perfect (!) Caldo de Pescado recipe. I adjusted the quantity to half.
But making it turned out to be a tedious process, using multiple utensils, bowls and strainers, and because of my fatigue, I screwed up and put the diced carrots in at the wrong time, rendering them unusable in the end (lots of small, spiny bones.). But fortunately, after various chopping, dicing, sauteing, chile toasting, blending, with multiple strainings to remove bonelets, blah blah; yet I was able to recover and add fresh new diced carrots to go in with two diced potatoes. After several adjustments for seasonings, chiefly chipotle seasoning cubes, it came out pretty good. It didn't have any fish pieces in it, but it tasted seaworthy.

The two filets of huauchinago required considerably less attention. I decided to make Huauchinago a la Naranja, as on Page 172 of our Gloriously Beautiful Mexico cookbook.

My quantity of fish was about 1/8th of that in the recipe, and as the recipe called for them to be baked, I decided to simply pan cook them.

Concurrently with much of the caldo cooking, I got out the two lonesome fish filets and seasoned them with lime juice, s&p, and garlic. They sat almost an hour, yet didn't dissolve into mush in the lime juice.

One of the ingredients is grated onion, but I really, REALLY had had enough with dirtying kitchen utensils, so I imitated the Mexican cocinera's technique of slashing with a knife at the cut surface of an onion until tiny bits fall to the work surface. (Something I hope to investigate in greater depth in the near future.) Even though my technique was clumsy, it worked and I had a small triumph.

I sprayed a little cooking oil into a non stick skillet, heated it with the onion, laid the fish filets on top, cooked them a minute or two on each side, heated a cup of freshly squeezed orange and lime juice, and poured it over. Brought back to a simmer, and laid on some fresh orange slices and some cilantro for color, as the fish was white, very white.

We reheated some leftover white rice to go with the fish. There was some mixed greens salad, but we couldn't finish it. So, the fish and soup and rice in the end, were enough. The fish out passably tasty, although given time, rest and careful thought, I would have done it differently.

We rewarded for our persistence by drinking two-thirds of a bottle of well chilled Las Moras Sauvignon Blanc with the meal. A good (also inexpensive) wine makes almost any meal better.

Moral of the story: When tired, eat out.


Finally, on the following Sunday, we met our friend, Ms. L. there. We guessed correctly that Sunday was probably their busiest day. There was immediate seating available on stools at a skinny counter outside, but we were willing to wait for a table. The wait was only about 15 minutes, and we were given a table to share with a young family.

We joined two friends at Ristorante Pulcinella in Morelia Centro. It’s in a wonderfully restored space, in a Spanish Colonial building, with a large, central sala flanked to one side by several smaller, more intimate dining rooms.

Upon entering the main room, one’s attention focuses on the wood burning pizza oven, built by Chef-owner Massimo Gigli, originally of Napoli and more recently of the late Ristorante La Dolce Vita in Pátzcuaro. He and his wife, Shadia, a lovely Mexicana originally of Pátzcuaro, have worked hard to create a beautiful dining space in a Spanish Colonial building.

Although the extensive and attractive menus covers the gamut from salads to appetizers, pastas, fish and meats, we were most interested in pizza. Doña Cuevas and I had enjoyed a sublime pizza the week before of fresh tomato sauce, mozzarella, prosciutto, and finished with rucola (arugula) when it emerged from the oven. We owe a thank you to David Haun suggesting this combination.

We ordered an Insalata César with Scampi Aglio alla Griglia, $130 pesos and an Insalata Italiana, $85. The scampi were very good, and the romaine lettuce was fresh and generous, but my Caesar Salad was drowned in dressing, albeit a good, made in house one. On the plus side, the Parmesan was shredded, not granulated, but because of the excess of dressing, I couldn’t finish the salad. 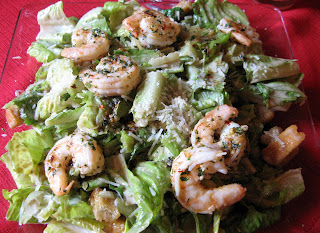 The Insalata Italiana was more sparingly dressed with a balsamic vinegar dressing.
Doña Cuevas says that the separate pizza menu has a list of smaller, less expensive salads. Shadia asked if Doña C. wanted a smaller or larger one, but for some reason, I was unaware of this option.

We requested a  medium sized Pizza Margherita, $150 pesos, with an extra crusty bottom, and our friends ordered a large pizza of mild Italian sausage and pepperoni sausage. I don’t know the price. Our waitress, Shadia, was careful to explain that “peperoni” in Italy was sweet ripe peppers, or “Pimientos morrones” in Spanish, and that what our friends wanted was the spicy sausage that goes by the name “pepperoni” in the U.S.

I had the good fortune of observing and video recording Massimo hand fashioning our pizzas. He had explained to me that he gives the pizza dough two rises; the first of two hours and the second of four hours, without refrigerating it. That extended fermentation explains why the finished pizza crust is so flavorful. I made a fine distinction that the crust of the pizza we’d had Thursday night the week before was even more delicious that the one we’d had Saturday. I attribute that to the even longer slow fermentation time.


There’s one aspect of the pizzas we’ve eaten there that in my opinion bears improvement. The bottom crust is too soft and supple to my taste. I prefer a crisper bottom and its lack at Ristorante Pulcinella is because the oven is fired to only approximately 475º F.  The pizza rims or edges attain great character with a nice, lightly charred effect. If only that could extended to the bottom crust. Despite these quibbles, it’s very good pizza.

In our past experiences with the food at Pulcinella’s predecessor, La Dolce Vita, we found that a lavish hand is used with olive oil. The same goes for the mozzarella cheese on our pizzas. For us, it’s just a little too much of a good thing.

Of course, you can also get pizza to go. Here's a beautiful eggplant and prosciutto pizza, just out of the oven, packed to go. But I strongly advise you to eat your pizza there, as soon as possible to when it emerges from the wood burning oven. 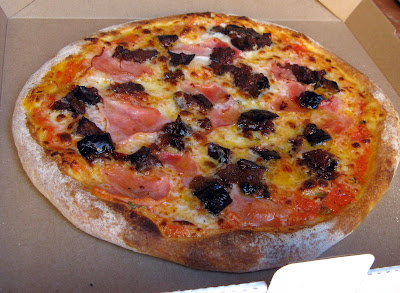 A real credit to Pulcinella are the reasonable prices for wine by the glass. Our Cabernet Sauvignon was only $40 pesos the glass. There was also a Tempranillo available.

Our lunch, including a pitcher of excellent Agua Fresca de Sandia and 3 glasses of Cab Sauv, was $555 pesos, plus propina.

So, my conclusion is that Ristorante Pulcinella is a very nice addition to the better dining options in Morelia. Some further refinements could be done. I expect it to get even better over time. I’m looking forward to dining there again and trying something more ambitious than pizza.

RATINGS (Provisional)
Food: ***1/2
Service: **** (Service is relaxed and somewhat leisurely, but attentive without being obsequious. Don’t be in a hurry, just enjoy the experience.)
Price: $$-$$$ in which $ represents $100 pesos per person.
Ambience: Palazzo Italiano comes to Morelia.
Hygiene and restrooms: Clean

Location: Morelia Centro, on Avenida Allende # 555, corner of Calle Andres Quintana Roo. Unfortunately, the Google Map place marker is offset a few meters to the west of the correct location.

View Larger Map
Posted by Don Cuevas at 5:00 AM 13 comments:

El Rincón de Allende is a nice little coffee shop restaurant with good food, service and prices, just off a corner of the Plaza d'Armas in Morelia.

Recently, medical matters caused us to stay in Morelia's Centro Histórico for two weeks. Most of that time, we were grateful guests of our friend Rosa, who operates the Casona Rosa guest house and the Casa Rosa Suite #13. There were kitchens available in both the Casona and the Casa Suite #13, but apart from a few simple homecooked meals, we ate out a lot.