The Chow's the Mein Thing 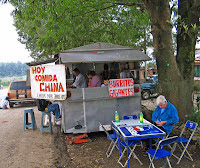 Ever since we lived up in the hills south of Pátzcuaro, we'd drive into town past a roadside food wagon that advertised "Comida China Hoy", in addition to "Burritos Gigantes", "Desayunos Americanos" and more.

A recent poll of favorite Pátzcuaro restaurantes elicited a glowing endorsement of this humble highway-side stand from expat and bon vivant "C.C". He said it was unbeatable for freshness and for price in the Pátzcuaro area. (He and his late wife operated a Chinese restaurant in the States.)

Susan and I tried it at last this past Saturday. We ordered: she Chow Mein PLUS Fried rice con pollo; and I, Cerdo Agri-dulce with Fried Rice and Chow Mein. Carbo loading, for our athletic lifestyle.

The friendly operators of the food stand, Chef Martín, his nephew Lorenzo, and Sra. María , will chat with you; Martín in more than passable English.

The ingredients are cleverly semi-prepared and finished a la plancha; that is, on a flat grill. Various sauces, some unique to this open air restaurant, are applied to the sizzling ingredients, each in its time.

We ended up with two, generously filled plates. Susan's Chow Mein-Arroz Frito con Pollo had tasty chunks of char-grilled chicken. My pork dish was a bit unusual: the pork part were several split wieners, coated in batter and fried. A bit wierd, but not bad.

The outstanding part of the food were the combined fresh vegetables, including broccoli, carrot, onion and sliced daikon radish. The latter takes the place of water chestnuts, which are virtually unobtainable here. I give them points for that, for when I looked for a substitute for water chestnuts, I used jícama, which works ok but is a bit too sweet.

Another plus is that the food is not swimming in gloppy sauce. There's just enough to point up the fresh ingredients.

We were brought a cruet of soy sauce and a larger squeeze bottle of a tasty, thick salsa picante. The plastic forks were doll house sized. Chopsticks are available, but we are inept with them.
(Also, using chopsticks in this venue might be a tad pretentious, don't you agree?)

When the rain began, we moved over to the counter seating and chatted with the staff. Martín had spent 16 years in the LA area, learning to be a chef. He returned to Pátzcuaro 2 years ago.

Our total bill, including two soft drinks, was $96 MXP.

Located on the Libramiento Ignacio Zaragoza, left hand side as you head up and to the south toward the Autopista to Uruapan; before Supercodallos super market (on the right). Open every day 9-5 except Sunday.
Posted by Don Cuevas at 7:09 AM 3 comments: