El Naranjo, a new restaurant in a beautifully restored casona on the Plaza Vasco de Quiroga is a restaurant we really want to like. It's been open about a month now, and reports from friends and acquaintances had been encouraging. I almost never dine at a new restaurant until at least a month has passed, hopefully giving both kitchen and waitstaff a chance to polish their performance. But I may not have waited long enough.

The food is unlike any other offered in a Pátzcuaro restaurant, predominantly Italian. The only negatives in friends' description were "plastic chairs" and " some service issues". (Personally, I consider the latter more relevant than the composition of the chairs.)

This past Friday, the four of us enjoyed the setting, each others' company and many of the dishes. But I was left with a sense of frustration and incompleteness as the food often did not match the menu's or waiter's description.

Some dishes were quite good. The Portobello Mushrooms were pretty good. (Just as our English speaking waiter described them.)

Larry's Carpaccio de Res (see below) was attractively presented and both he and Geni liked it very much. But instead of shavings of the traditional Parmesan, they had laminas of mozzarella (according to our waiter.) Do details like this matter?

Geni and Susie both enjoyed their Ensaladas Azul. The greens were varied and fresh, the blue cheese was generously portioned, and the balsamic dressing was sparingly applied. All good.

Larry ordered a very attractive Carpaccio de Res, which was a hit, in spite of the substitution of mozzarella for Parmesan on top.

I had wanted a Caesar Salad, but our eager, friendly but poorly informed waiter told me that it would be too much food, since a salad came with the lamb. Larry and I planned to share the lamb, the special of the day. But it was an expensive failure.

We were not told about this special of the day until I asked our waiter, who inquired in the kitchen, then emerged, smiling, to tell us it was ready. We were excited with anticipation. But this dish was a major let down for me.

The anticipated salad never came with our "lamb". This lapse didn't occur to me until we were done eating.

Of the meat, there were some scraggly pieces of bone, fat and skin. The jus was attractive, but the bread was so dreadful looking that I didn't want to use it to sop up. (The little roasted potatoes were pretty good.)

Geni's Saltimbocca was at first glance unprepossessing, but she wrote that it was delicious. I would have wanted the absent Marsala sauce, as described on the menu.

Doña Cuevas chose Cannelloni Ripieno di Spinaci e Ricotta. It was creamy and bounteous. Note that this dish was not made from pasta tubes, but classically, with crepes. A plus for the kitchen and chef.

Desserts: the Lavender infused Creme Brûlée was very good, and the Tiramisu was very enjoyable and not as excessively rich as some versions. I wished that there were more of it. The fact that it was served in a mason jar may seem incongruous to the overall ambience (after all, this is not Jo Jo's Catfish Wharf), but having noted that, I ate it all. The tiramisú, not the jar.

My espresso was forgettable, but our friends approved of their cafés con leche.

When I returned from washing my hands. I saw a couple of pizzas at another table. They were very unappealing to me, particularly the crusts. But perhaps it's unfair to criticize something I didn't eat. (But I will).

Like the bread. Slices of pale, gray dry bread, accompanied by three stingy balls of butter. I couldn't help but compare this wretched looking bread with the wonderful, warm, crusty loaves, and dishes of seasoned butter in olive oil, as served at Macelleria Roma, in Mexico City.

Conclusion: we still have hopes from El Naranjo, and are willing to give it another go. But their overall performance would have to improve if we were to go there more than that.

Ambience: lovely patio in a restored casona.
(Music: I'd heard complaints of too loud live music, but we were blessed and caressed with first rate recorded tracks of Edith Piaf, Buika and other artists.)

Cost: Unfortunately I can't tell you the exact cost because I never saw the check total nor got a decent photo. Sra. Cuevas recalls that our check was $1,172 pesos, plus tip. We also had  a carafe of limonada, two glasses of red wine and a michelada included in that. Here's a partial view of the check, which gives some prices. 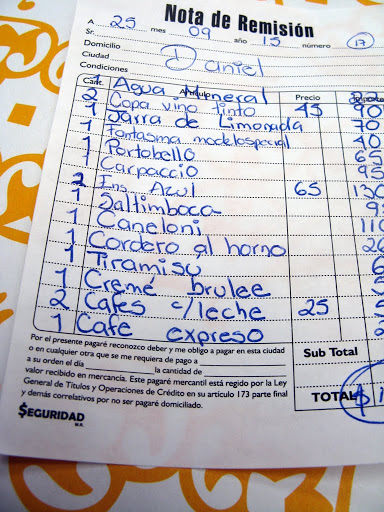 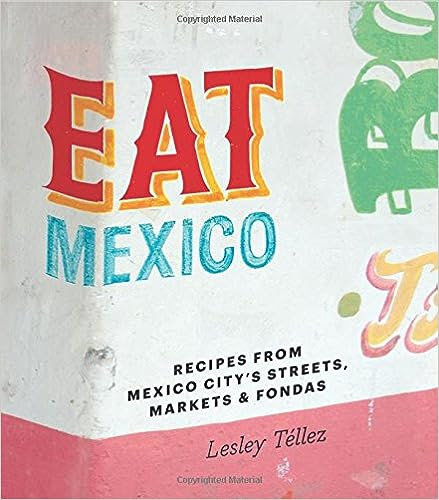 I know Lesley Tellez as an enthusiastic writer and cook, deeply dedicated to Mexican cooking. I followed her blog, "The Mija Chronicles" from its inception. Lesley has brought the same enthusiasm and dedication to her first book, Eat Mexico.

The book is very personalized in its point of view, and in no way pretends to be a comprehensive work on all the regions of Mexican cooking. Instead, it focuses on Mexico City and the surrounding Distrito Federal, the area in which the author lived for four or more years. But it is in México, D.F. that the best of the nation's cooking converges, and Lesley has given us a delicious sampling of that convergence. The accompanying text bears the distinct stamp of the author's personality. It's definitely not written by a committee.

This is demonstrated in a couple of esoteric recipes in the book, notably, the highly imaginative and creative (but, I must admit, not appealing to me) "Dark Chocolate Chicharrón Cookies".

I have so far made only two, simple, more mainstream recipes from her compendium; Guisado de Acelgas, and Agua de Piña con Perejil. Both were clearly written, easy to follow and successful. I'm looking forward to trying more complex recipes, when an opportunity presents itself.

I recommend Eat Mexico for readers and cooks who want to experience the vibrant flavor of Mexican cooking of the capital city, México, D.F.

This review first appeared on Amazon.com, where the book is available for $16.63.

Posted by Don Cuevas at 6:51 AM No comments:

Cirio and All That

or: The Quest For The Ideal Canned Tomato

I know I'm totally obsessed with obtaining and maintaining a good supply of Italian Cirio Pomodori Pelati Entero, or even the second ranked but still superior range of Spanish Cidacos Tomates. The truth is, I don't really even need them right now. I have enough on hand to last for an unknown time. But I will need them eventually, and they are becoming increasingly scarce on supermarket shelves in Morelia.


They are essential to me for making rich tasting pasta sauces and other uses. Concurrently, the excellent, not Italian, Kirkland Signature Organic Tomato products have been replaced on the shelves of Morelia's Costco with unwieldy, impractical #10 cans of S&W tomato products. That's not progress, it's regression. Great for food service operations but impractical for the home cook.

There was a brief period of hope, when our friend Jennifer located the desired Cirio Pomodori Pelati Entero in the online catalog of Walmart Mexico. Jennifer kindly offered to receive the coveted goods at her Morelia home.

We made valiant efforts place the order, hurdling numerous obstacles, but for all our efforts it ended in frustration. To make the online purchase, I first had to register with Walmart.com.mx. That wasn't too hard except the registration form at first rejected my email address as invalid, then went on to reject Jennifer's home phone. Then it accepted them. ¿Quien sabe?

After registration, I went to Delivery Options. I was offered delivery from two widely distant Walmarts, and of course, I chose the nearest. Shipping charges were $39 pesos. There was a Store Pickup Option at no charge, but I was leery of that, having once run afoul of a local Walmart's ineptitude when I wanted to buy a bag of ice for about $10 pesos. That's another story.

The next option left me incredulous. I could choose the day and the hour  of delivery. I was extremely skeptical that Walmart could fulfill this delivery as ordered within the specified range, but I put in our preferences.

I then went to Payment, where I got to choose Cash, Credit/Debit/PayPal, etc. I selected Credit/Debit. But the next page was the most surreal of all.There was no place to enter the Credit/Debit specifics. How in the hell was it to be paid for? I surmised that it must be C.O.D.

The next day, Jennifer's answering machine recorded a call from Walmart that they didn't have the requested item in stock, but instead offered a substitute. It was impossible to decipher what that substitute might be, but at any rate, she was urged to call them back. Unfortunately, they didn't leave a callback number!
Somehow, this outcome was not a surprise.

I have to ask: is this any way to run a retail empire?
After this fiasco, I was ready to give up, at least with Walmart.

But, Never Say Die
Soon after, while shopping for baker's flour and such at Super Codallos Pátzcuaro, near the autopista, I found nice cans of Mexican made La Morena Puré de Tomato, whose sole ingredient is stated to be "TOMATE".  That's a potential step up from the gold standard here of Del Fuerte Puré de Tomate, which is "condimentado". That means "seasoned". Del Fuerte isn't really bad stuff, it's just not the quality I'm seeking. 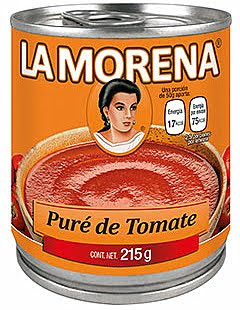 I had a brilliant idea flash into my brain. Amazon.com. I was Amazed by the ample offerings of both Italian San Marzano tomatoes available through the online retailer plus Muir Glen brand organic tomatoes, in a variety of presentations. The only snag is getting such products delivered here to Mexico. (The aforesaid items are not yet available on amazon.mx)

I did make a test batch of pasta sauce, using one, precious 28 ounce can of Cirio Pomodori Pelati and a can of La Morena Puré de Tomate. The La Morena wasn't bad, just not as rich in tomato-ness as the Italian or even Spanish products. Nor was it as "heavy" or thick, but it was usable. The final sauce was slightly bitter, but that could be because I'd used a different recipe for Basic Tomato Sauce than my standard. It was from the usually very reliable SimplyRecipes.com. I think the bitterness came from the parsley in the sauce.

So, as things stand now, my obsession is in abeyance. But someday, my truck will come, carrying a cargo of great canned tomatoes!

There is an earlier post on this topic, Attack of the Killer Tomatoes, from February 7, 2010. Things have not changed much in the field of tomatoes.

UPDATE:
Last Wednesday, we stopped at the newer of the two Chedraui supermercados in Morelia, on a tip from Jennifer Rose that sometimes Chedraui carries "weird stuff".

Although I was unable to relocate a favorite sparkling white wine, Blanc Pescador, I hit the jackpot when I roamed the aisles. A store employee directed me to the not obvious shelves of canned tomatoes. Then, BONANZA! There was not only a very ample stock of Cirio Pomodori Pelati, but Cidacos Tomates Enteros as well, and at $18 pesos a can, a crazy bargain. You bet I stocked up, but left a couple of cans for other customers, and as a memory jog to store staff to reorder soon.

Once home, I unpacked them, placed them on the kitchen counter where I could admire them, played "Tomatoes on Parade", and built towers. Then when I tired, I neatly snugged them away into their tomato houses for the night. I went to bed contented and pleased.

Posted by Don Cuevas at 3:10 PM No comments: