We'd considered 3 restaurants in the Centro Histórico for our "splurge" meal. One, El Círculo Vasco Español features mostly Spanish cuisine during the week, but on weekends offers an extensive buffet of seafood for $179 pesos pp. We actually went up and looked at it. At just after one in the afternoon, the chafers and cold dishes were filled, covered and waiting for guests to arrive. That there were no guests yet was just an indication that Mexicans eat at later hours than Norteamericanos, but the idea of chafing dish seafood "on hold" held little appeal for me.

The other restaurant, on Isabel La Católica, a block south of our hotel, was the palatial Casino Español, a place of grandeur if there ever was one. (Panorama QuickTime Movie of Stairs.) There are actually two dining rooms there. The ground floor room, "El Mesón" is very simple in decor, with Venetian blinds and dominated by a Coke cooler, and has a slightly less expensive menú del día than the sunny yellow upstairs dining room, with linen tablecloths and nice looking wineglasses. However, the upstairs dining room is not necessarily dressy, as I was assured by Ruth Alegría ("Ruth in Condechi") on the egullet.org Mexico forum.
But in the end, I felt that the menú of the day (less than $120 pesos) was rather restrained (although one could order a la carta instead.), so we postponed a meal there for another trip.
We decided on the third candidate of our short list.
El Cardenal is a classic, downtown, suited business persons' clubby dining spot. The ambience is conservative and genteel. Now it also seems also opened to nicely dressed,. well-behaved tourists like us and people wearing printed T-shirts. To accomodate the influx, the operators have used yield management to squeeze maximum income out of the three floors of dining rooms. They are connected by both stairs and elevator. Smartly dressed hostesses equipped with walkie-talkies dispatch customers to the tables as they become available.

Thus it was that we were seated almost in front of the elevator, on the third floor. The atmosphere in the corridor was somewhat sterile, but we could focus on the food and generally ignore the less than stellar seating. (I'll concede that we came on a busy Saturday afternoon.)

Our waiter brought us a Molcajete de Queso Fresco, Aguacate, y Salsa Fresca Verde. (It came unbidden, but it later appeared on our bill. Fortunately, it was very good and only cost $25 pesos, the cheapest thing we ate.) There was also a basket of pretty good bread and pastry sesame sticks.

Susan ordered an Ensalada Oscar (Butter lettuce, tomato slices, a little onion, and three generous slices of very good goat cheese. Olive oil and vinegar were available to dress the salad to taste); Sopa de Pescado y Nopal (a clay pot carrying a flavorsome fish stock, garlic, onion, fish chunks and nopal, with a touch of chile); Cazuela de Róbalo y Epazote (almost a reprise of the soup, but more chunks of fish, a more concentrated brown broth, and lots of fresh leaves of epazote); a dish of rice on the side, which she skipped.)
I ordered Tacos de Pato (very good, meaty duck tacos, accompanied by a small dish of very good guacamole. I shared the tacos with Susan).
Main course; Róbalo en Barbacoa. (Fillet of sea bass coated with chile, baked in parchment and a touch of beer.) Very good. Rice.
I ordered dessert: Pastel de La Casa (several layers of mocha-raspberry cake; good but quite unnecessary. Cafe Espresso; not good.
We shared a half bottle of a Spanish white wine. It was very nice, but it didn't go very far, of course.

(I didn't take photos, an exercise of self restraint in these upscale surroundings, but the birthday celebrants at the table behind us freely took many shots. The payoff was when three suited troubadours with guitars came to them and sang a beautiful rendition of "Las Mañanitas". I enjoyed a free ride on that performance.)

We were contemplating the tip for the pretty good service, when the check came with the tip already printed in. It was in the near vicinity of what we would have given, perhaps a bit more generously if on our own.

You may draw your own conclusions.

My conclusions: very good food, good enough service, poor treatment in the customer relations area (bad seating; unordered add-on; tip already printed on cc slip, waiting for signature.) But overall. we were pleased with the meal. On the other hand, our previous breakfast there, although simpler (and far less expensive) seemed more gracious.
Posted by Don Cuevas at 5:52 AM No comments:

Mexico City: Will Walk For Food 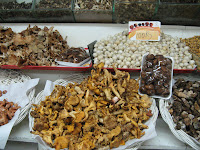 Last weekend, we went to Mexico City to mark my 66th birthday with, umm, cultural activities and feasting.

The cultural part was pretty much limited to looking at and photographing the exteriors of Colonial Era churches, listening to the organ grinders and a lot of walking through the Centro Histórico.

The feasting part got off to a halting start with a stop at Bar Cantina La Montañosa, on Calle Las Palmas; listed in Nicholas Gilman's book, Good Food in Mexico City. The bar has a raffish scene, and the "free" food that comes with the purchase of a drink was o.k. but nothing special. A meal of one Caldo de Camarón and one Coctél de Seviche de Abulón accompanied by two Cervezas Victoria was $70 pesos.

Unfulfilled, we walked many blocks westward to an old favorite, the Taquería Tlaquepaque. We made a mistake this time in ordering very large assortments of tacos or taco fixings, which in the first instance ranged from ordinary to repugnant; and in the second case, passable but excessive. If we were to return (and I think that next time, we'd choose El Huequito instead.)

On the walk back, we found the strength to stop in at the fabulous Pastelería Ideal on Av. 16 de Septiembre. It was Friday afternoon, and the place was jammed, as citizens chose pastries and breads from the mind-boggling assortment on the hectares of self-service display tables.

At the checkout and wrapping counter, the crowd was so thick that I had to hold my tray high to avoid hitting other waiting customers in the head.
I always enjoy shopping in the Ideal, even when it's crowded. (Maybe more so.)

The next day, Saturday, we organized our itinerary better. We started out with fresh juices at Jugos Canadá; one Nopal combo and one Mandarina. Both were very good. We stopped at Cafe Jekimir on Isabel La Católica at Regina for some first rate coffee; then another long walk westward to Calle Ayuntamiento at Calle Luis Moya and the Restaurante San José, where we had a decent breakfast. We'd been to this restaurant twice in past years. It's just a neighborhood place, serving local folks. Since then, it's undergone a makeover, in knotty pine with sepia tinted photos from the Revolucíon era.

Restored, we sought the Mercado San Juan, whose entrances are hidden on a side street, Calle Ernesto Pugibet, one block south of Ayuntamiento, just west of the park of the same name and under the shadow of the Torre Telmex.

The medium sized market is notable for its high quality products, specializing in Spanish style embutidos; wild mushrooms in season, fresh Asian vegetables (I bought some beautiful ginger root at only $26 pesos a kilo.), pristine seafood and specialty meats. There were also some fine looking Spanish style breads. I felt constrained to buy only a couple of cans of "La Chinata" Pimentón de La Vera, which was a great find, at only $30 pesos a can. 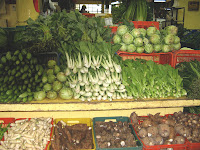 Our walk back took us to Puros Hermanos Petrides, purveyors of fine, Mexican cigars for over 70 years. Calle Rep. de Uruguay, 22-A. The cordial staff assisted me in making a selection.

We'd done a lot of research on where to have our big, splurge meal, and after looking over the menus of two Spanish restaurants, (one a seafood buffet), ended up making a reservation at El Cardenal. We'd had a wonderful breakfast there last April, and now wanted to try dinner.
We returned to our lodgings, the stylishly Art Deco Hotel Gillow, to clean up and rest.