Less than three weeks after our first meal at the attractive, new Restaurante El Naranjo, on Pátzcuaro's Plaza Don Vasco Quiroga, four of us returned for a Sunday comida. The talented Jerry Engelbach enhanced the experience with jazz selections on his piano.

On this occasion, we sat ourselves on the opposite side of the patio dining room, in the aisle near the boutique shops. Our table was essentially a fancy card table. It was really too small for a foursome, as the plates are oversize.
But we managed by using the ledge next to us that separated us from the main patio. We didn't like the slippery, sliding, paper table runner.

The chairs were a mix of the contour plastic chairs, which are actually quite comfortable, and a pair of plastic, folding deck chairs, which were less so. We swapped the folding chairs for contour chairs from the adjacent, unoccupied table. But next time we'll try to find an 8-spot table if available. In the end, it's all patio furniture, which is appropriate to the venue.

Ron shared with us an appetizer of Mozzarella alla Amalfitana, attractively served in a cast iron pot. The melted cheese was pleasant, if undistinguished, but spiked with minced anchovies and what seemed to be sun dried tomatoes, and so, we finished it. 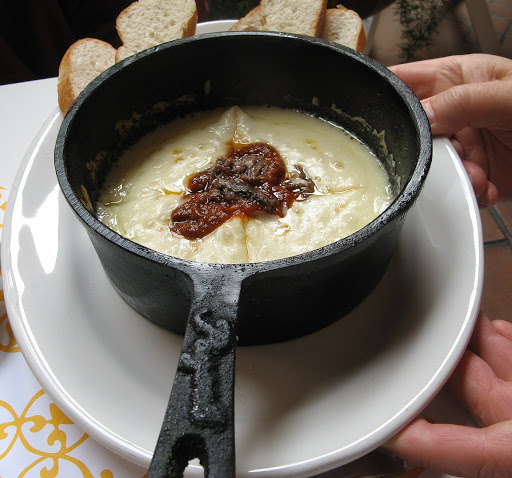 The bread "basket" held a pleasant surprise: thin, crisp, bubbly cracker bread, lightly sprinkled with rosemary leaves. This bread was attractive as well as tasty. The pan ordinario was, well, ordinary. But at least it was fresh, in good condition and slightly warm. It was useful for holding swirls of the melted mozzarella.

The salads look and taste great, other than the overly sharp, acidic dressing on my "Ensalada Asada", which had a scattering of very thin disks of broiled vegetables over very nice mixed greens. The eggplant on the salad as well as next to the filet steak was "aggressive" to my mouth, but that may just be me.

When I asked our waitress about the specialties from the horno de leña, she told us "ancas de rana a la mantequilla (frog's legs in butter), pizzas, filetto al forno." (filet of beef).

The frogs' legs seemed to me to be a curious candidate for a wood fired oven, so we passed.

But all four of us decided to order Filetti al Forno. Each was a solid piece of beef, with a coarse grained texture. These were not filet mignon, which was fine with me. I was pleased, having ordered mine cooked "término medio", which translates to pink-red center. Our friends who ordered theirs more done were less pleased, as at least one was cooked to total doneness. I think that the 300 gram steaks cooked better than the smaller version.

All the steaks had a nice char, although the thin slices of eggplant alongside were pointless. Usually the meats come with lightly herbed potato cubes baked with a touch of olive oil, but lacking any browning. So two of us requested sides of spaghetti with butter instead. I was tickled when our Spanish speaking waitress used the Italian phrase, "Spaghetti al burro" in place of the Spanish "Espaguettis a la mantequilla". This pasta was simple yet satisfying.

The service from our waitress was noteworthy. She accommodated our needs instead of trying to "push" her recommendations on us. She was helpful and well informed. I liked that she spoke with us only in Spanish, instead of vernacular English, as had our previous server. She was "correct" and more professional in manner than our first waiter.
(It would be a nice and useful touch if the wait staff wore name tags.)

We saw several pizzas served and they looked a lot more attractive than those I saw on our last visit. The crusts looked thin crusted, and well browned. We will probably try one or two on our next visit.

I ordered coffee and a Creme Brûlée. The waitress told us that they were out at the moment, and there would be a 15 minute wait. I was willing to wait. So I was a little surprised when she brought the dessert in less time. It looked good but when I broke the caramelized crust, I discovered that the creme was still liquid. It hadn't baked even to the consistency of a good dish of natillas. Reluctantly, I summoned the waitress and sent it back. It was taken off our bill with no hassle.

In all, this was a more enjoyable and satisfactory experience that on our previous visit. Although there were incremental but significant improvements in the food, it was our excellent waitress who really made a difference.

I will definitely return.

Posted by Don Cuevas at 6:40 AM No comments: