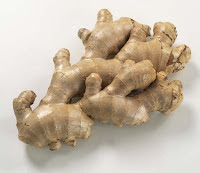 My fondness for ginger has deep roots. I've loved it especially in the candied or crystallized form. Fresh is nice, too, when used in cooking. Ground is fine for baking cookies and moist, molassesy ginger breads. There was once a great Ginger Ice Cream offered at Howard Johnson's, but no more.

Fortune blessed me recently with a serendipitious juncture of gingers. We'd visited the Mercado Medellín, in Colonia Roma Sur, México, DF. This is a very nice mercado in an upper middle class area of the city. Along its well-ordered aisles, I found at least two stand selling fresh ginger, at the reasonable price of $42 MXP a kilo.

I brought it home and it wasn't until several days later, while browsing the fun-filled forums of the Thorny Tree Refuge Stuff It! branch, that I saw a post by "Bixaorellana" on making ginger beer. That was intriguing, but the recipe used ground ginger, and I knew it had to be better made with fresh. A quick Google turned up a very easy way to make Fresh Ginger Beer.

I got right on it. The process is astoundingly simple. The primary caution involves gas. The rapid build up of CO2 may result in rupture of the soda bottle, unless you refrigerate it as soon as the fermentation has peaked. Grolsch Beer bottles with resealable stoppers would be better, but there's some extra expense involved, unless you are already a Grolsch drinker. My bottle simply erupted in a fountain of ginger beer. Providentially, I'd placed the 2.5 liter Coca Cola bottle into a larger, institutional food dervice container.

The brew was very pleasant although lacking a rich depth of ginger flavor, as well as looking too pale. I'd even substituted light brown sugar for the white sugar in the recipe, and increased the amount of ginger from the original recipe.

Concurrently, I made a rather thin-bodied but zesty ginger syrup out of the rest of the ginger.

After sampling the ginger beer, I dosed the rest with some ginger syrup, and put it out for a second fermentation. That took place in less than 12 hours. This time, I carefully captured the spewings of ginger fountain, and recycled them back into the bottle. The double-fermented brew was much better, and with more days in the fridge, it improved even more.

At any rate, this may become a regular item in my repertoire. I bought more fresh ginger at Superama in Morelia, and although not as nice as the Mercado Medellín stuff, it's more than satisfactory.

I have started a new brew, a Sichuanese style Spiced Ginger Beer made from a syrup base with piloncillos, dried Mandarine peel, cinnamon stick, star anise, a couple of cloves, allspice berries, Sichuan Peppercorns, and a dried red chile, as well as copious amounts of grated fresh ginger and some lime. It's steeping now. That will be strained and filtered, then uses in judicious quantities to spike the regular ginger beer. Results should be in in about 2 days.

Here's a recipe for Ginger Syrup for Home-Style Ginger Ale (etc)
from "Better Than Store Bought", by Wittie and Colchie, Copyright 1979, Harpers and Row, publishers. (I highly recommend it, if you can find a copy.)

Peel and finely chop the ginger; you should have about 3/4 cup
Bring the ginger to a boil with the water in an enameled or stainless-steel saucepan. Simmer for 5 minutes, then let stand for 12 to 24 hours, covered with a cloth.
Strain the pulp through a sieve lined with two layers of cheesecloth; squeeze the pulp in the cloth to extract all the juice.
Return the juice to the pan, add the sugar, and bring to a boil over moderate heat, stirring. Boil gently for 5 minutes, skimming off any froth.
Cool, strain into a bottle, and refrigerate.

Use about 1 tablespoon of syrup mixed with 6 ounces of chilled soda water to make a gingery drink.

The bounty of fresh fruits coming available in the Pátzcuaro Mercado attracts the eye, engages the cooking instincts, and gets the juices flowing. One of the most satisfying ways to use these fruits is in a cobbler or a kuchen.

Inevitably, some joker will ask, "What's kuchen?" It's a cake, Jake; that's what, with a fruit or cheese filling. Not a layer cake, but a cake-like or pastry base with a deep filling of sweetened cooked fruit.

A cobbler is a kuchen turned on its head. The sweetened fruit is on the bottom, in a deep baking dish, while the crust, (usually a sweetened, biscuit type dough), lies on top.
Take away the top or bottom crust, heap on some streusel, bake, and you have a Fruit Crisp.

The type and juiciness of the fruit determines whether you use a thickener or not. Berries, such as the luscious zarzamoras (blackberries) benefit from some thickener. Apples, with less moisture and containing the natural gelling substance, pectin, require little or no starch thickener.

The Plum Cake I made the other day, based on a recipe in The Joy of Cooking, had 3 tablespoons of Minute Tapioca and 2/3rds cup of sugar to 1 kilo (raw weight) of red plums. It was not enough sugar and a little too much tapioca.

Here's the recipe for Plum Cake (kuchen) from The Joy of Cooking, with my variations **.

Wash and drain 1 kilo fresh red plums.
Pit plums over a bowl. Cut in half if small and in quarters if large. This should yield about 4 cups or slightly more.

Add wets to drys, mix lighly to make a medium soft dough.
Line a deep, 8 inch baking dish with the dough, patting out. It does not have to reach the rim.

Put the prepared fruit filling onto the dough base. I also added a few tablespoons of preserved (uncrystallized) ginger from Trader Joe's. Entirely optional, of course.

I also topped the fruit with a streusel, using a little oatmeal in it for textural interest.

Place on a baking sheet, and bake about 30 minutes, or until top is well browned.

Try to let it cool a while before digging in.
Here's a Cobbler version. It's even easier than the Plum Cake.

Prepare the fruit, as above. Butter the inside of the baking dish lightly.

NOTE ON BUTTER:
Please, use decent, real butter. Do not attempt these recipes using margarine, or whipped butter, or, "I can't really believe I bought this extra expensive, artificial butter resembling substance". When buying mantequilla pura de vaca, en México, check the package carefully to make SURE it's not margarine in cow's clothing. Sniff the package for an excess of saborizantes. A usually good brand is Gloria Mantequilla, sin sal, in the green wrapper. A better brand is Kirkland, usually available in Costco. It's said (although I haven't tried it) the best is Anchor Brand New Zealand Butter, sometimes at Costco. Recently sighted at Costco, a very expensive French butter, but not, in my opinion, worth the extra cost for use in baking. Maybe for shaving off curls to put on your croute de pain au levain, sprinkled with fleur de sel; chacon a son gout. (Cada loco con su tema.)

Return to recipe...
Pour in the prepared, sweetened, spiced fruit, with thickener as appropriate, dot with butter. You'll need more fruit for this, up to 7 cups.

Top with this dough, from the Fannie Farmer Baking Book, by Marian Cunningham, or a variation:

Blend the dry ingredients, cut in the butter to a coarse, irregular cornmeal like consistency; add the milk. Mix dough lightly with a fork. Roll out on a floured surface. Place over fruit.
Optional glaze: a few tablespoons of milk on dough top, sprinkle with white sugar, bake at 425º F for 35 to 45 minutes.

A foil or parchment lined baking sheet is recommended under the cobbler dish in case of boil over.

Posted by Don Cuevas at 2:57 AM No comments:

On our return from our stay in the U.S. and Mexico City, we hurriedly restocked our fridge with basics, such as acelgas, zanahorias, col, cebolla, ajo, jitomates, chiles poblanos, tomates verdes, limones Persas.

The second trip to to the Pátzcuaro mercado, and I picked up more "interesting" vegetables, such as pimientos morrones de colores, berenjenas, mango petacón.

There is one stand that specializes in "legumbres exóticos". It is run by Señora Padilla and her son. It's located in the cross-street of the mercado thay eventually exits onto Calle Codallos. It's in front of a few steps and a portón that accesses the central indoor corridor of the market. Thursday is usually the best day for berenjenas (eggplants). Sometimes there are rábanos negros or rábanos o nabos Japoneses; black radishes and daikons. The latter are more common than the former.
I first made fried peppers in vinaigrette, with capers; then on return I made escalivada, roasted eggplant, onions, peppers with olive oil and vinegar. I should not neglect to mention garlic.

There are seasonal surprises, as well. Ladies outside the mercado were offering luscious, locally grown zarzamoras (blackberries), at 26 or 28 pesos a kilo. I snapped some up and quickly turned them into a cobbler. My cobbler recipe is derived from one written by Marian Cunningham in the Fannie Farmer Baking Book.

Now ciruelas are offered at 14 pesos a kilo. These are very small red plums, and they are a p.i.t.a. to pit, but worth the effort, as they have a deep, concentrated flavor of plum-ness when baked. I made them into a variant on a Plum Cake from The Joy of Cooking. The cake is essentially an inverted cobbler. A sweet dough is patted out into a deep baking dish; sweetened and lightly thickened and spiced fruit is piled on. I made a butter streusel for a topping.

I saw greengage plums yesterday, also in miniature, but they don't appeal to me. And, of course, there's the regular, Michoacán "plum", a dense, oval fruit of gold-tinged red. I haven't eaten one recently.

Two women were selling young English Peas in the pod. A modest sized bag for 10 pesos.I asked them "¿Cuantas perlitas rinde una bolsita como esta?" They told me that you eat them, pods and all, as they were young and tender. I plan to try these today. They suggest using the peas in a soup. That's a possibility, but I was also thinking of a risotto or pasta. Some fresh mint might be nice.

I was pleased to see la bonita Señorita de los pepinos at her puesto. She was looking very nice, in a Renaissance portrait sort of way, in her Spring outfit. The cucumbers, for once, were smaller instead of the grossly mature, seedy ones usually sold, but a quick glance convinced me that these were not prime quality fruits. I may look more closely today.

Yesterday there were tomates bolas, round, American type tomatoes. They went for 18 pesos a kilo. We split one for lunch. It was a bit watery and underflavored, but not too bad. I baked some Honey-Oatmeal-Bulgur Bread so we can make Bacon Lettuce and Tomato Sandwiches today.

At the Mercado Medellín in México, DF, I'd bought a nice hand of fresh ginger. When we got home, I was inspired by a post on the Stuff It! forum of the Thorny Tree Refuge site to make Ginger Beer. Not only is it super easy, it's very good. I came up with an improvement or two on the original recipe, to make a stronger, more gingery brew, using home made ginger syrup. I'm about to make it again. It's quick, easy and delicious.

I'll try to post some cobbler variations and my ginger beer recipe later. Perhaps also a Black Radish Salad or appetizer, I learned from my mother.