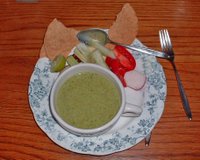 Served with crudites plates and packaged tostadas and "crema" to accompany the soup.
Posted by Don Cuevas at 4:31 AM 1 comment: 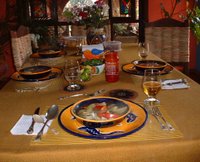 It seems an article of faith amongst aware travelers, that when traveling in another country, you should try to eat the local cuisine. I subscribe to this belief, but it's another matter when you live in that country. When you are there full time, as we are, then you want some variety in your diet.
To accomplish this, you must improvise, mixing specialty ingredients that you have brought across the border, and local, readily available foods, such as cilantro and jícama. Some imagination is useful.

Thus it was, two Sundays ago, that we traveled to the other side of Pátzcuaro, Michoacán, México to the lovely home of a Mexican-American couple. I had met them through various Internet fora and Blogger.

The reason for our social engagement was to visit them and to enjoy a Asian style meal together, made with local ingredients (not counting several dried fungi I'd brought from the States). Our house was too small, and not ready for guests at that time. Their house is notably more cómoda, besides being very atractively decorated.

Our dinner began with a Vietnamese-style Vegetable Soup. To make this, I'd first cooked a stock of water, dry-scorched onions and garlic; lemon grass, ginger, star anise and a bit of sugar and Vietnamese Fish Sauce. This made quite a heady and concentrated broth.

The next stage was to prepare and cut into soup-sized chunks several local vegetables; principally chayote, calabacita, chile Poblano, carrots, and Roma type tomatoes. We'd brought these vegetables, precut, to the house for on the spot cooking.

For that, I used a separate kettle, to which the aromatic stock was added and a judicious amount of the very useful Knorr-Suiza Caldo de Pollo powder. When the vegetables reached the tender but not mushy stage, and I corrected the seasoning with some more Vietnamese fish sauce and freshly squeezed lime juice. Cilantro and cut limes were place in bowls on the table, to be used at the pleasure of each diner.

Meanwhile, 3 eggs were cooked in a separate skillet to a soft-scrambled stage, then combined with the stir fried meat and vegetables. The seasoning was corrected, and a sprinkle of the aromatic sesame oil added.
Our hosts provided an attractive cazuela de barro from which to serve the dish at the table.

Meanwhile, my wife was putting a light film of sesame oil on white flour tortillas, then cooking them in pairs in a dry skillet. These were the easy way to substitute the traditional "po-ping", sometimes loosely translated from Chinese as "Mandarin Pancakes", but our method served very well, with much less labor.

When all was ready and on the table, we ate our soup (photo) and then after, each made our own rolls of Mu Hsu Pork and ate them out of hand. It was different, tasty, and importantly, fun.

Our beverages included Martinelli's Sparkling Cider and coffee of Uruapán with our dessert: a home made flan, and fresh pineapple and mango.

I hope that we can do something similar in the future, either here at our own house or again at the house of friends.
Posted by Don Cuevas at 4:52 AM No comments:

Splattered: I made hamburgers last night. Good ones are hard to find here in restaurants and snack bars. They are like thin, weird-tasting, breadcrumb-filled patties. They often put a slice of ham on it! If I'd wanted a ham sandwich, I'd have ordered one.

So I bought 3 lbs of not very attractive ground beef at Wal Mart.When I got it home and divided it into thick patties, it didn't smell so fresh, Not spoiled, just unfresh. In the cooking, they turned out just fine.

We didn't cook them until yesterday. I loaded one side with lots of chopped garlic, then seared them in a skillet. (splattering the stove). I put coarse salt and pepper on them, and finished them with L&P Worcester Sauce. I made "pickles" by peeling and slicing a cucumber and whipping up a quick marinade of vinegar, sugar and spices plus onions. we ate them on Mexican teleras rolls—sort of a French roll, but slightly flat, with one or two creases along the top. They were the best hamburgers we'd had since we last cooked them in Little Rock. We even bought sliced yellow processed cheese to make it more authentically American.
Crusty fried sliced potatoes alongside, with plenty of ketchup. Ahhhh!!

Tonight was a supper of Kir Brand Jumbo Hot Dogs, acelgas (chard), betabeles (beets) y papas (potatoes. With the exception of the very pink hot dog, (Obviously, I am not a purist.) all was at the peak of natural freshness. We had made a leisurely walk throgh the mercado and had bought wisely today.
Posted by Don Cuevas at 7:03 PM No comments:

Friday, the baker made bread 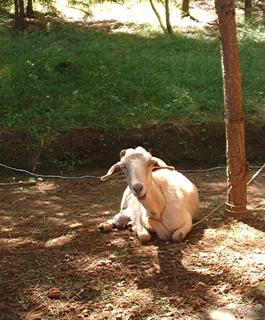 Yesterday, Friday, was an active day. I awoke early, at 3 AM, and baked fudge brownies and whole wheat bread. Our new gas room heater stove seemed determined not to light, so I sent an email to the Service Department of www.emege.com.ar/ to ask for solutions. Interestingly, in a couple of hours I got an answer that worked. The solution was, in essence,"Fiddle with it until it lights."

Later, I prepared our comida, a sort of fusion between an Asian, Mexican and slightly Belgian beef stew. The key ingredients were beer and lemongrass, but three, dried chiles pasillas made it dark and spicy. Luckily it was laden with fresh vegetables, such as chayote, calabacita, carrot, celery and potato. We had it with plain, steamed Basmati rice.

While awaiting lunch, I took advantage of the nice weather, and we sat on the porch in the sun. I smoked a Churchill cigar that I'd bought at Sanborn's on wednesday. I'm no cigar expert, but this one was rich and mellow. I suppose a few little glasses of Tequila El Cabrito from a Wal Mart (!) promotion, helped the general relaxed ambience. To help set the stage, there was a nanny goat tethered outside our casita to help cut the grass.

The only bicho en el ungüento was the highly intermittent Internet connection. This problem persisted to Saturday morning, and despite my best Net wrangling, may yet be a problem. ¡Ojalá que no!
Posted by Don Cuevas at 1:22 PM 1 comment:

My First Day On the Blog 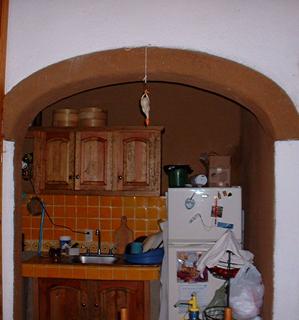 Hola. I'd been posting messages on the Lonely Planet Thorn Tree message boards (especially the Mexico Branch and the "Get Stuffed" food Branch) for several years now, as well as maintaining galleries of photos on pbase.com. http://www.pbase.com/panos
We recently moved to the vicinity of Pátzcuaro, Michoacán, México, and it occurred to me that I could consolidate my posts on various subjects, along with photos, all on one blog. So, here I am.

My interests are primarily cooking, especially the regional cuisines on México. What better place to test this out than the foods of Michoacán? Our kitchen is very small, but I'm adapting to it. Today, I hung a gift from a chef-friend, from the archway to "bless" the kitchen.

This being my first blog-day, things are a little sparse here. I hope to be filling out the virtual table before very long.