First of all, let me say that I am not an aficionado of Continental breakfasts. Nor am I drawn to Bed and Breakfast lodging for many reasons, among which are all too frequently parsimonious Continental breakfasts. I am compelled to take up the sword against this scourge following my reminiscence on our Michoacán Yahoo Group. I'd recalled the breakfast fare at a simple beachside hostelry in Troncones, Guerrero, consisted of white toast, jam and coffee or tea. In my opinion, this sort of minimalist breakfast shows a lack of effort on the part of the hosts. At that time, February, 2006, a cold water palapa hut cost $38 USD, now risen to $50. I don't know if the generosity of the breakfasts has increased. At least, the hosts were congenial.

(I read on TripAdvisor an enthusiastic review by a guest who stayed for a month at that place. My mind boggles. I was insane with boredom in less than three days.)

Turning back many years, we stayed one night in a newly remodeled B&B in Galveston, TX. It was a very spacious room. I remember that the large bathroom had slippery slate floors. Style over practicality. In the morning, we were offered stale Danish pastry, unripe fruit and coffee and even staler conversation by a surrogate host. That to me showed total indifference to guests' needs.

I define a minimal Continental breakfast as comprised of superior baked goods, real butter, a quality jam or marmalade and strong coffee.

Then there was an ex-miner's hotel in Telluride, CO, which despite its wretched sagging beds, put out a generous selection of quick breads, coffee and tea. They benefited from a highly productive Telluride bakery.

Spain is among the world's leaders in meager Continental breakfasts. We stayed several nights at a casa rural in Las Merindades in Burgos Province, where the included breakfast was toast, margarine, jam and, I will admit, decent strong coffee. An active traveler would wither away on such a breakfast were it not  for intermediate stops at local bars where you could get a sort of breakfast sandwich of egg, ham and cheese, or, if you were lucky, a chapata roll with chorizo Español or perhaps sardines. We would halt our journey at small town bars where we would often get freshly made tortilla Español. While not fancy, it gave sustenance.

After crossing the crest of the Cordillera Cantábrica, we were fortunate in finding "El Vejo", a bakery café in the town of Reinosa, Cantabria, where we stuffed ourselves on a full, real breakfast. 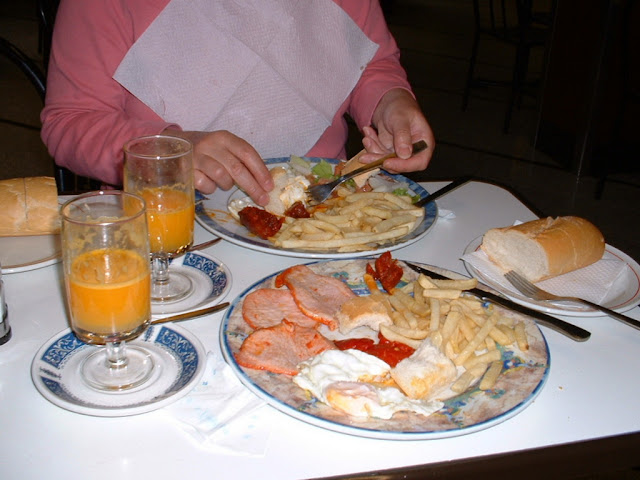 Superior Continental breakfasts were offered at the Hostal Alfonso, in Santiago de Compostela, Galicia. There were nice croissants, at least. The hosts are very nice people.

Bakery cafes in Spain may be the secret to getting by with slender breakfast rations. This is one showcase in a bakery in Santiago de Compostela. 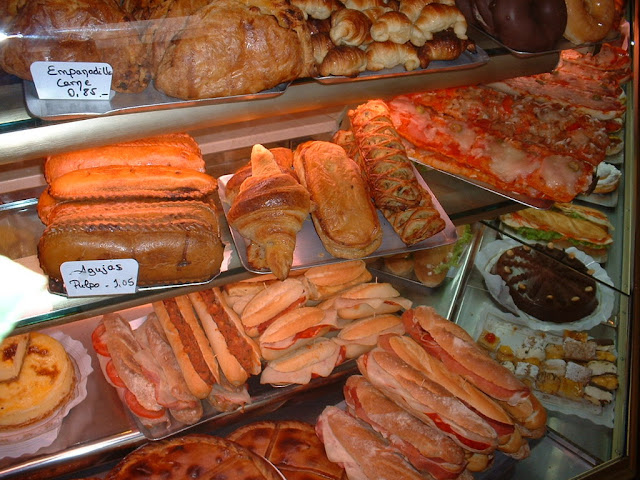 Credit where it's due: about three years ago, we stayed at an Air BnB listing, the Great House in San Miguel Chapultepec, México, D.F. The breakfasts were what can be called enhanced Continental. Toast, juice, cereal, yogurt, granola, coffee, tea, juice. That shows care on the part of the hosts. I would have liked some protein foods and variety, but then it would not be Continental, would it? Unfortunately, the upscale neighborhood seemed to have a dearth of adequate street food options.

I have mentioned the Turotel hotel in Morelia in previous posts. For a modest additional fee, guests may have a very nice, full breakfast, from a generous buffet, or request special dishes from the accommodating kitchen staff. While it's not gourmet fare, it's good and will give you the energy for your day's tasks. THe Turotel is one of my favorite hotels in Mexico.

Soon we will stay at the Fiesta Inn, Aeropuerto Ciudad de México, which includes a full breakfast in its rate. Whether we will have time to take advantage of it remains to be seen, as we have a mid morning flight departure. I hope to report back.