Fonda Doña Licha's, on Calle Cocos, about a block west of Paseo del Palmar is a stalwart among Zihuatanejo eating places. It's very much a local place, although it has been discovered by adventurous visitors. It's a great place for tasty, authentic local food, at low prices. It does breakfasts nicely, but the main reason for its popularity are the economical comidas corridas (Set lunches at one, low price. I think the comida corrida ran about $50-55 pesos.)

The place is dedicated to quickly getting good, inexpensive food to its many customers. There are touches of decor, but it's not noted for frills. On the other hand, it's spotlessly clean. (Some guests might be troubled by the few street pigeons which scavenge the floor for crumbs. We were not, as they were quiet and didn't fly about inside and get up on the tables.)

At our first meal at Doña Licha's, I had Enchiladas Verdes Gratinadas, which elsewhere would be called Enchiladas Suizas. I am not a huge fan of enchiladas, but these were good, and not excessively rich. 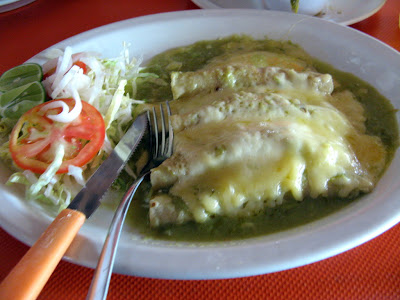 Doña Cuevas had a comida corrida. It started with a good Sopa de Tortilla, then Pechuga de Pollo a la Plancha (flattened breast of chicken, simply prepared), frijoles de olla (simple, earthy and delicious boiled beans, which come to one's table unbidden but welcome.). We shared a pitcher of pretty good Agua Fresca de Piña, which is extra, and I had a couple of shots of local mescal, at an amazing $10 pesos a shot! The total bill was $145 pesos, or about $12 USD.

On Thursday, our day of departure from Zihua, we had plenty of time until our bus left, so we went to Doña Licha's for breakfast. Sra. Cuevas had two fruit plates, one with yoghurt and granola, the other "natural", and a glass of papaya juice.

I tried the apporeadillo, and drank a mixed glass of papaya and orange juices. Doña Licha's apporeadillo is somewhat more picante and characterful than that at Carmelita's, although I enjoyed both. Of course, the tortillas are hand made at both places, but I give the edge to Licha's for their just off the comal (flat cooking surface) freshness. 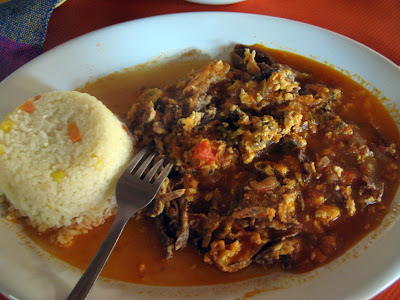 I don't recall what our breakfasts cost, probably under $120 pesos. The apporeadillo was about $60 pesos. Overall, it's a great bargain.

These are all of our current favorite Zihuatanejo eating places. We went to a few other places of lesser interest, but I'm not going to review them. We didn't get to eat at the famous Tamales y Atoles Any, a fine, if somewhat touristy place in Zihua Centro, and worth a visit. On our earlier trip in 2009, we had an excellent Mole de Olla and Consome de Pollo. But the Mole de Olla seemed high priced, at $100 pesos. And that was in 2009.

Another omission was that we didn't have any of the local pozole (hominy based soup with pork, chicken or seafood), as it's customarily cooked and served on Thursday evenings, but we were absent then. Another trip will be required.

Some restaurants are so enjoyable that they deserve a return visit. We ate at Carmelita's Cafe 4 times in 6 days. But others also got multiple visits, among them were Mariscos Chendo's and Fonda Doña Licha.

I learned of Mariscos Chendo's through enthusiastic TripAdvisor reviews, but I'd also found it on my own when I walked the several blocks of Calle Adelita townward from our hotel. Much of Adelita is torn up for repaving, yet it's still accessible.

Mariscos Chendo's lies near the far end of the street, but worth the dusty walk. I'd looked over the menu and found some dishes which indicated a creative but tasteful talent in the kitchen. Notably, "Cevichendo", an appealing treatment of ceviche* of mixed seafood that included orange juice. There was also a Chile Relleno de Mariscos, a dish that hitherto I'd only imagined. Of course, the menu included the two signature Zihua dishes, Coconut Shrimp and Tiritas de Pescado. Coconut does not thrill me in all its applications, but I can understand the appeal of this dish.

*I love tiritas and some ceviches, but considering that we'd recently had some other health issues, we decided to be prudent and not test the waters, so to speak.

We went for an evening dinner on both visits. The atmosphere is very casual. We were attended by friendly, motherly waitresses who spoke some English. There's a hammock in the dining room, near the family table, which various people spent time swinging between attending to the guests and their own well behaved children. Jazz played quietly over the sound system. Ceiling fans beat the balmy air.

Inevitably, I had the Chile Relleno de Mariscos, with the queso. It was an imposing presence on the plate, bathed in a light, creamy pink sauce. I liked the mild chile and the seafood but the cheese was a bit rubbery. Nevertheless, I had no trouble cleaning my plate of every scrap and drop of sauce.

Both dinners were accompanied by fresh mixed vegetables, cooked to just this side of al dente. Even the little mounds of rice were good.

We splurged and had Nutella crepes from the short dessert list. La Señora C. had hers with fresh strawberries and mine with banana slices. Nice, but not really my kind of dessert.

With agua mineral to drink, our bill came to $325 pesos.

A few nights later we returned. It was like coming home.
Same friendly, motherly waitresses, same scene, a few more tables with diners.

On this occasion, Doña Cuevas had camarones al mojo de ajo, which were small but sweet, still in their shells. You have to eat them with your fingers, which can be fun.

I had filete de dorado con espaguettis con salsa de pimento. The dorado was prepared with only salt and black pepper and I think a touch of butter. It was wonderful. The spaghetti had a clingy cream and cheese sauce and small squares of colorful sweet peppers. It was good, but the dorado was magnífico. We like this kind of cooking which just enhances the fresh ingredients but doesn't overwhelm them with elaborate seasonings.

Our motherly waitress also brought us a complimentary plate of Machaca de Pescado, vaguely similar to Bacalao a la Vizcaina, but sweet from the dried fruits with which it was cooked, plus some tomato, onion, and chile. Interesting, but I wouldn't order it if I had the opportunity.

I see that my time and space are used up. Doña Licha's will have to wait for Part 3.
Posted by Don Cuevas at 6:45 AM 2 comments:


Two weeks ago, we escaped the chill mountain air of the Pátzcuaro area by boarding a couple of buses to the Pacific coast city of Zihuatanejo, Guerrero. It's an easy 5 hour trip by bus, somewhat less by private vehicle. Our goal was to get some sun and warmth, hang out by the pool and to eat a lot of fresh seafood. We accomplished these goals to our great satisfaction. I was able to last six days at the coast without going coastal in the coco. (I now wish that we hadn't left, for when we returned to Pátzcuaro, it was as though we were having a winter in Northern Ireland.) Above all, we found some very enjoyable restaurants within reasonable walking distance of our hotel.

Friday, the night of our arrival, we stayed close to our hotel, the Villas Miramar, and walked a couple of blocks to Rufo's Grill. Rufo's is an outdoor restaurant under a thatched palapa roof. It's open only at night. I got a very nice ribeye steak and Doña Cuevas had grilled red snapper accompanied by grilled sliced zucchini and mushrooms. 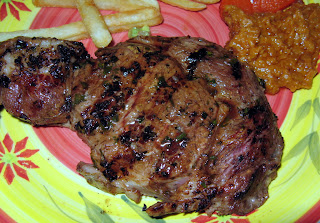 We'd been to Rufo's a couple of times before, and in general, it's a pleasant place to eat.

We make a point to avoid high priced "gourmet" restaurants, not just because we are cheap, but because we prefer fresh, natural ingredients, prepared simply. Thanks to glowing TripAdvisor reviews, we discovered Carmelita's Cafe. It's been in business only 4 years, but has won the hearts and palates of many devoted customers. We enjoyed it so much that we ate there 4 times in our 6 day stay.

Carmelita's is located somewhat out of La Zona Turística, on the north side of Avenida Heroico Colegio Militar, just west of the junction of Paseo del Palmar, between a car wash and a mini super market, "El Cacahuate".

The restaurant has a positive, very friendly energy, from the owner, Sra. Ma. del Carmen Ramirez de Gonzales to her working family and employees.

Of the several dishes we tried, the Filete de Sierra al Mojo de Ajo was delicious and impeccably fresh. Doña Cuevas enjoyed an egg white omelet with vegetables. Another very good dish was the meaty, tender, succulent Costillas de Puerco en Salsa de Jitomate Asado. Look on the blackboard menu for specials of the day. The coffee was decent but the better choice for drinks are the wonderful aguas frescas. We tried pepino y limón, one of sandía, and one of maracuyá on different visits.

Will return for sure!
To be continued
Posted by Don Cuevas at 9:04 AM 7 comments: