A cheap shot title, I will admit. But, in a way it fairly characterizes our meal at the chic, new Aquiles Terraza on Avenida Acueducto in Morelia.

Aquiles Terraza has its strengths, but it has weaknesses as well. I love the casual rooftop setting, other than the ascent of three flights of stairs necessary to reach the Asian influenced dining area.

The restaurant offers a selection of Asian influenced (read:"interpretations") dishes. If you are a hidebound traditionalist, you may reject them. But if you have an open mind, it could be very enjoyable. I give them credit for attempting something new in Asian cuisine in Morelia. But the bottom line is this, that three of the dishes we had during or recent visit were flawed. With only a little more care in the kitchen, the flaws could have been avoided.

I recalled the first meal we had at the original location, in the Hotel Pórtico, on Calle Aquiles Serdán 744, in Morelia Centro. (Thus the name, "Aquiles 744".)

Our experience at Aquiles Terraza got off to a good start with our drinks. We began with a Mezcal San Mateo for Sra. Cuevas and a Mezcaliña coctel for me. The latter is reminiscent of a Margarita made with mezcal, but without all the frou-frou, or, if you prefer, the hoo-ha. We both enjoyed our drinks.

We chose two appetizers. The first were some excellent Camarones Tempura, coated with panko crumbs in place of the traditional batter. I prefer them this way. The dipping sauce, of fish sauce, lime juice and cilantro was overly assertive for the delicate shrimp, but easy to avoid. (This fish sauce-lime juice theme reappears in my Ensalada Thai, yet to come.*)

The other appetizer, Tako Yaki, was three small balls of octopus in wheat flour "dumplings", and a miss. The interior held raw gooey flour paste and some chewy, nearly flavorless octopus pieces. This item should be dropped over the side.

Our main dishes were attractive and promising, but both my Ensalada Thai con Rib Eye  and la Señora's Bipimbap suffered from a heavy hand with the seasonings. My salad had an aggressively citric-fish sauce dressing* and the Bipimbap an overload of bean paste or some similar salty, salty condiment. It was also partially cold.


Although Bipimpap is traditionally served in a heated volcanic stone vessel, in which all the ingredients are stirred to finish cooking, we don't hold Aquiles to tradition.
(A little research indicates that it isn't always served in a heated stone bowl.) It would be analogous to serving in a heated, Mexican molcajete. But at least the food would have been hot.

Relief came with an order of Thai Tea, "Cha Yen-Thai". We were surprised that it was chilled, but that was good. The orange color and the chai-like sweet spice flavors were odd at first, but we grew to like it. It helped alleviate the excessively pungent flavors of our food.

We decided to skip dessert, although I had good memories of a Nieve de Rambutan and a panna cotta at the original location.

Although the meal was flawed, we like the concept and would give it another go. But we would make our seasoning preferences known to the waiter to convey to the kitchen this message: "Lighten up!"

The manger or owner came to our table when we finished, and asked how we liked it. I was able to calmly tell him our opinions. He listened quietly, murmured a few things, and didn't get defensive. But I don't know if our message got through.

Food:6 (Could go to 8 with more careful seasoning.)

Parking: yes, immediately below, in a guarded lot.

Some of the best comida in México, or at least, in Michoacán, originates in La Tierra Caliente, the hot lands to the south and west of the central Michoacán highlands. There's a special touch with seasoning of the hearty foods that I've come to appreciate.

We had been to the Restaurante Caracuaro for comida with friends several years ago, and it seemed o.k. At the time, I preferred the food at Fonda Marceva, in Centro Morelia.

We have twice breakfasted recently at the smaller of two Restaurante Caracuaro branches, namely, the one on Paseo de La República, the peripheral highway on the western fringes of Morelia.

The other location is at Calzada La Huerta, on Carretera Federal 14, where the highway departs Morelia on its way to Pátzcuaro and beyond, just before the highway bridge going to Pátzcuaro. We haven't tried that location, although it appears more convenient, with ample parking.

The food is hearty and the two young waiters who've served us have been lively and spirited. We were brought freebies,  the Tierra Caliente version of "amuse-bouche". The first breakfast visit saw queso ranchero, crema, two salsas caseras and a toquera each. Totopos (freshly made tortilla chips) are de rigeur. You will recall that a toquera is a slightly sweet fresh corn "latke". The toqueras at Caracuaro are sweeter than those that we had at Las Cocineras Tradicionales.

On our first breakfast visit, Sra. Cuevas ordered huevos albañil, which the cooks reportedly had never made before, but they nevertheless did a pretty good job of it.

I had aporeadillo, a classic of the genre, consisting of pieces of sun dried beef, coated with egg, in a spicy sauce. This aporeadillo was the heartiest I've ever had, with larger pieces of beef than the usual shreds. Hot, handmade tortillas came with this meal. The tortillas tend to be a little  too chewy.

On our most recent visit, the freebies flowed freely. This time we each got a steaming hot uchepo, one mound of freshly made, still warm* requeson, three salsas and some more queso ranchero.

*That the requesón was warm is clue that they make their own. How many restaurants do we know of that do that?

La Señora got Chilaquiles con Pollo, which looked a right mess, but were reportedly tasty and picante. The pollo was a fried chicken leg in place of the usual shreds of chicken.

Although the menu has lured me with menudo each Friday, it's never been ready at our early hour of arrival. But on this occasion, the Caldo de Res was ready. It was bountiful and substantial, loaded with chunks, not shreds of beef and nicely cooked vegetables in a savory broth. The Caldo came with three small clay dishes of cut limes, cilantro and chopped onion.

It was probably the best Caldo de Res I've eaten anywhere. I was pleased that the menudo had not been available. I loved the soup, but confess that it was too much for me to finish the last spoonfuls of liquid.

Parking: limited parking in front, more on the side.

Posted by Don Cuevas at 5:01 PM No comments:

Today's restaurant is Chai Cafe. It's conveniently situated on Avenida Acueducto, with easy access to the valet tended parking lot. Chai Cafe is designed for the hip, newer generation of young Mexicans. It's one unit of a chain with restaurants in other cities, notably in Mexico City.

There are hostesses to help guide you to a table, and soft, comfy, cushioned seats. The menu is long and detailed, with plenty of choice, although a long list of dishes is not necessarily a good sign. We did not lack for attention from at least three individual waitstaff. The decor is "casual contemporary"

We'd just returned from an outing to a distant suburb and were ready for breakfast. We began with a small basket of fairly good breads and tall glasses of orange and tangerine juices.

It was tough to decide what to have from the extensive menu. I finally chose Enmoladas and Sra. Cuevas Enfrijoladas. (Think of enchiladas, the first dipped in mole sauce and the second in bean puree .)

Pretty good, except that the tortillas for the enmoladas were somewhat tough and dry.

(The best enmoladas we have had were at El Gorgeo de Las Aves, in Ziracuaretiro. Running a distant, but still good second are those at Fonda Mamá Lupe, in Pátzcuaro.)

But we were reasonably satisfied with our breakfast, although nothing about it was especially distinctive.

Posted by Don Cuevas at 5:43 AM No comments:

I'll begin this week with the inexpensive but worthwhile
Mi Cocina San Miguel. It may be the sweetest, nicest cocina económica ever.

This neat little restaurant is located at the corner of Calle Monterde and the northern end of Calle Águstin Melgar, Colonia Chapultepec Norte.

It's a sunny spot, due to three (yes, 3!) roll up doors and big picture windows, with above average decor. (Don't worry. It has the requisite plastic chairs.)

In the mornings, at least, when we were there, it seems to be a one man show. The owner-chef-waiter-and, I suppose, dishwasher, has got all the bases covered in a deft and efficient manner.

The food is good, the service swift, and the price is right. 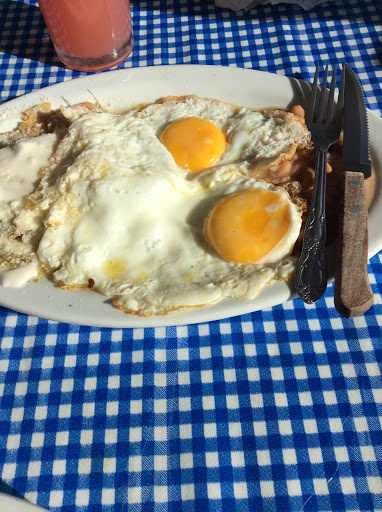 I decided to shun eggs that morning, so I had instead a hearty plate of Carne de Puerco en Chile, arroz y frijoles. 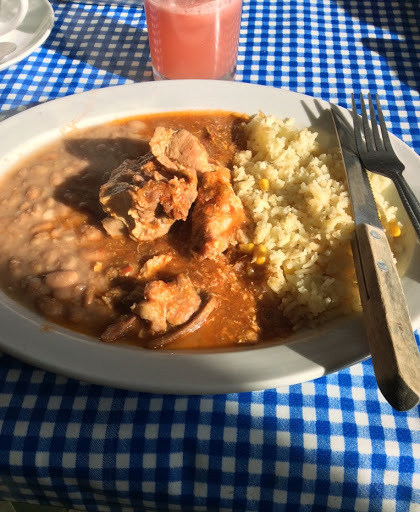 And pink grapefruit juice. I also had a Sprite from the beverage cooler. Naturally, our meals came with hot tortillas. La Señora had a big cup of so-so café de olla.

We would return, not only for breakfasts, but for comida.

Lately we've been spending more time visiting our Michoacán state capital, Morelia. Our eating out has ranged from humble cocinas económicas to the lofty heights of Parrilla y Canilla. Higher prices and elegant surroundings are not a guarantee of ultimate satisfaction, as you shall see.

The following descriptions I will attempt to make brief.

First, Super Vegetariano, on Calle Monterde near the corner of Francisco Márquez, Colonia Chapultepec Norte.
This is a buffet restaurant serving daily from about 1:pm. It's inexpensive, $55 pesos, and wholesome, but is it good?

We found most dishes that we tried woefully under seasoned, and in several instances, tepid in their steam table pans. But the simple salads, offered with a nice selection of serve your own dressings, were a highlight.

Rating:
Food: 5-6
Service: you serve yourself, other than the agua del día.
Cost: $55 pesos per person, help yourself. Big Bargain

Marea Baja, on Avenida Acueducto, near the corner of Tejedores de Aranza, acrosss from Farmacia Guadalajara.

Cute little corner seafood place and bar, with a limited menu. I got a Tuesday special of an Hamburguesa de Camarones con un medio litro de michelada. Nice deal. The michelada was good and refreshing. But as to the "Shrimp burger", the shrimp were overcooked and tough as well as nearly tasteless. It came with American cheese, which pretty well finished off any shrimp taste.

My wife had a beautifully prepared Coctel de Camarones, which had the benefit of having the Clamato-catsup sauce served on the side to apply to one's preference.