A good friend and cook has exhorted me on several occasions to make chicken stock from scratch, instead of using shelf-stable Kirkland Organic Chicken stock-in-a-box. Cooking a chicken or two is requisite to obtain the precious chicken fat.

I’ve thought of making my own chicken stock, but there are numerous reasons I don’t.

One: I’d have to go to the Mercado to buy chicken. Currently, we try to stay away from the mercado. We love the tradition but abhor the energy burning reality. I suppose I could buy chicken at La Bodega Aurrerá. Mmmm?
Two: I’d have to cook it within a limited time frame ere it spoils. When we return home from the Mercado, we just want to rest.
Three: I’d have to strain out the solids.
Four: I have to make sure that there’s room first, in the fridge, then in the freezer. (The Kirkland needs no refrigeration until opened.)
Five: After it’s refrigerated, I carefully lift off the valuable fat. It would be a good idea to further render the fat to eliminate moisture. It will keep longer.
Six: Get appropriate size container(s) and refrigerate/freeze the fat.
Six-(a): mark containers with date, and ID.
Seven: clean up pots, pans and utensils. Pay attention to thorough grease removal.

I’m sure that the resulting chicken stock is superior in every way to the Kirkland, other than in convenience. Oh, it’s not organic, but that’s not a high priority for me. Convenience is the keyword for why I use Kirkland. Plus it doesn’t need refrigeration until opened.

Chicken fat is not a healthy food, but I admit, it would be nice to have some at hand every once in a while. It's a must in potato knishes and in kasha varnishkes. (I never have toasted the kasha in the oven, as in the linked recipe; only in a pot on the stovetop.)  I substitute vegetable oil. Fat chance that I'm going to render chickens for stock and the golden bonus of chicken schmaltz.

We need an image of chicken schmaltz here. Maestro!

Kasha Varnishkes, Step-by step recipe.
Posted by Don Cuevas at 4:34 AM No comments:

The Forum of the Three Squeezers

The title of this post has nothing to do with the former New York restaurant, The Forum of the Twelve Caesars. It's just a play on words that amuses me. Instead, this is a loose, product  comparative review of three citrus juicers, one ancient manual and two shiny electric models.

We'll begin with the manual, lever action squeezer; Old Faithful. Fuel: muscle power. I bought this cheaply at a moving sale some years ago. 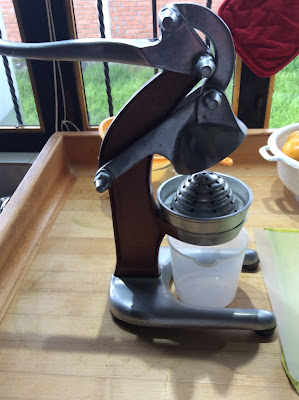 The lever-action, manual juicer is reasonably fast and effective, although larger orange half shells frequently lodge in the upper cup and must be dislodged with a knife blade. It isn't difficult, but it slows down the production flow. The lever/handle becomes slippery and I try, fruitlessly, to keep it wiped dry with a paper towel. When squeezing large quantities, the strainer and cone need to be emptied of excess pulp and seeds, or it may clog, then overflow.

I must have been in an enchanted spell when I sought an electric juicer, one that I hoped would be faster and require less energy input than the manual juicer.

I fell into the clutches of amazon.com.mx and in a moment of heedless impulse, purchased the cute little Oster citrus juicer. (below) 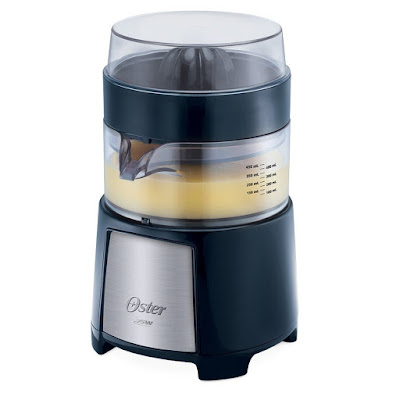 This I regard as more of a toy than a serious kitchen appliance. Oh, stoopid me.

These are its good features:

Here's the bad things about it:

Moving ahead now into deeper realms of impulse shopping. I'd read positive reviews of this Cuisinart Pulp Control Citrus Juicer made by the respected company that made my food processors, and other quality kitchen tools. I saw it at Bed Bath & Beyond in Morelia. I was enthralled, and swept it off the shelf into my shopping cart, heedless of its high price. At least it wasn't an online purchase that had delivery challenges. 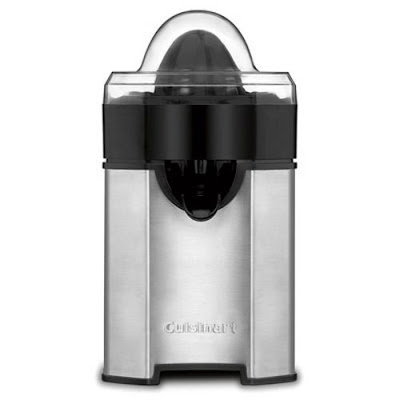 It looks much more serious than the Oster. It looks positively ecclesiastical.

I've juiced with the Cuisinart several times, and it seems superior to the Oster. It hasn't yet died under the loads with which I task it.

Here are some advantages:
These are the negatives:
I can optimize my use of the Cuisinart Juicer by, ah, reading the effing manual, and even better, watching the highly instructive video below.

Note the rocking motion of her hand while holding the citrus half. That action yields the most juice.
Also note the use of the clear plastic dome to extract any juice remaining in the pulp.
Another nuance is the electric cord storage receptacle. (I know, not a biggie.)


I am delighted to have found this video. It gives me hope that I can progress in getting the most from my Cuisinart Pulp Control Citrus Juicer.


UPDATE: At last, I gave in and bought a PDH Industrial Model Citrus juicer, from Costco.mx on line. This monster, weighing in at almost 10 kilos, ain't walking off the counter. It's all stainless steel and is of simple construction. It's fast and powerful. I can juice 3-4 kilos of grapefruits in about 15 minutes, without breathing hard. I did have to find a taller juice receptacle, but that wasn't too difficult. Clean up is easy, as there are only three simple parts in contact with the fruit. It can be cleaned disassembled or in place. Even the on-off switch is better. It's an industrial type rocker switch that lights up red when on.

I learned to place a strainer over the receptacle container, as the machine puts out an excess of pulp mixed with seed fragments.

Tonight I had a little difficulty in disassembling the operating head, so I started to clean it in place. But then, the parts in question loosened and I finished cleaning it disassembled. 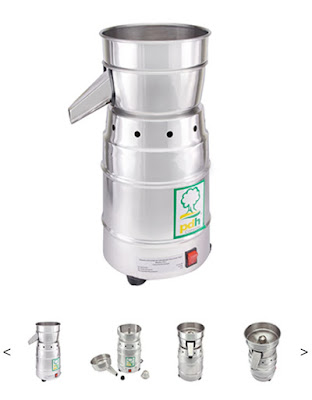 Posted by Don Cuevas at 6:25 AM No comments:


Las Palomas was the second restaurant recommended by our hostesses at Casa Navacoyan. The service was acceptable and the food decent, but with a tendency to heaviness.

The menu is extensive, with cheese a common element in very many dishes. 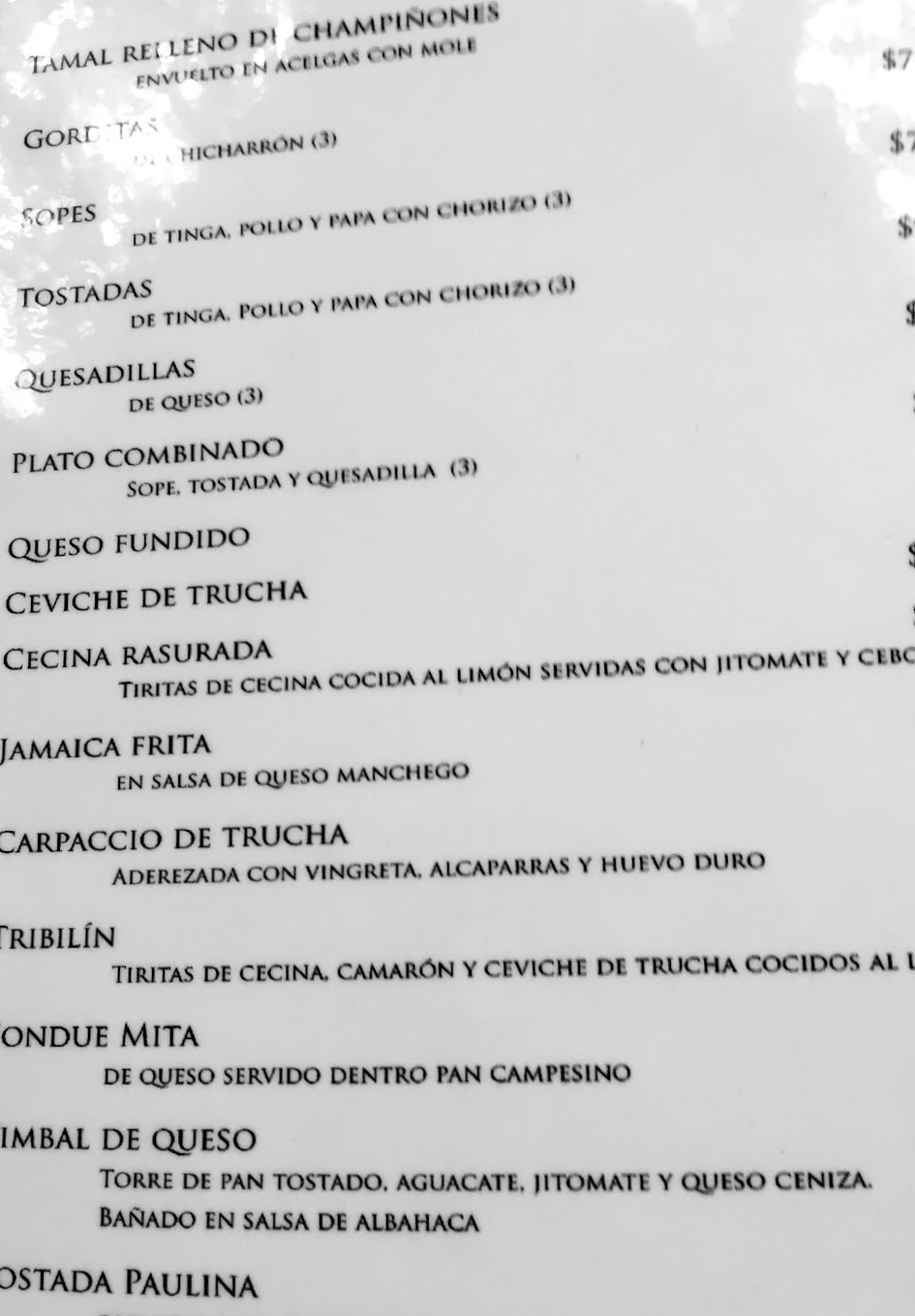 The entrance is on a street currently closed to vehicular traffic but easily traversed on foot. Just inside, up a gentle slope, is a covered dining area. To the rear there's a partially covered patio area. We chose to sit in the front due to flies in the open patio.

Our waiter brought us some dips and chips to munch on while we decided what to order. The nearer salsa was interesting for the fruit in the blend. The frijoles were a heavy paste. 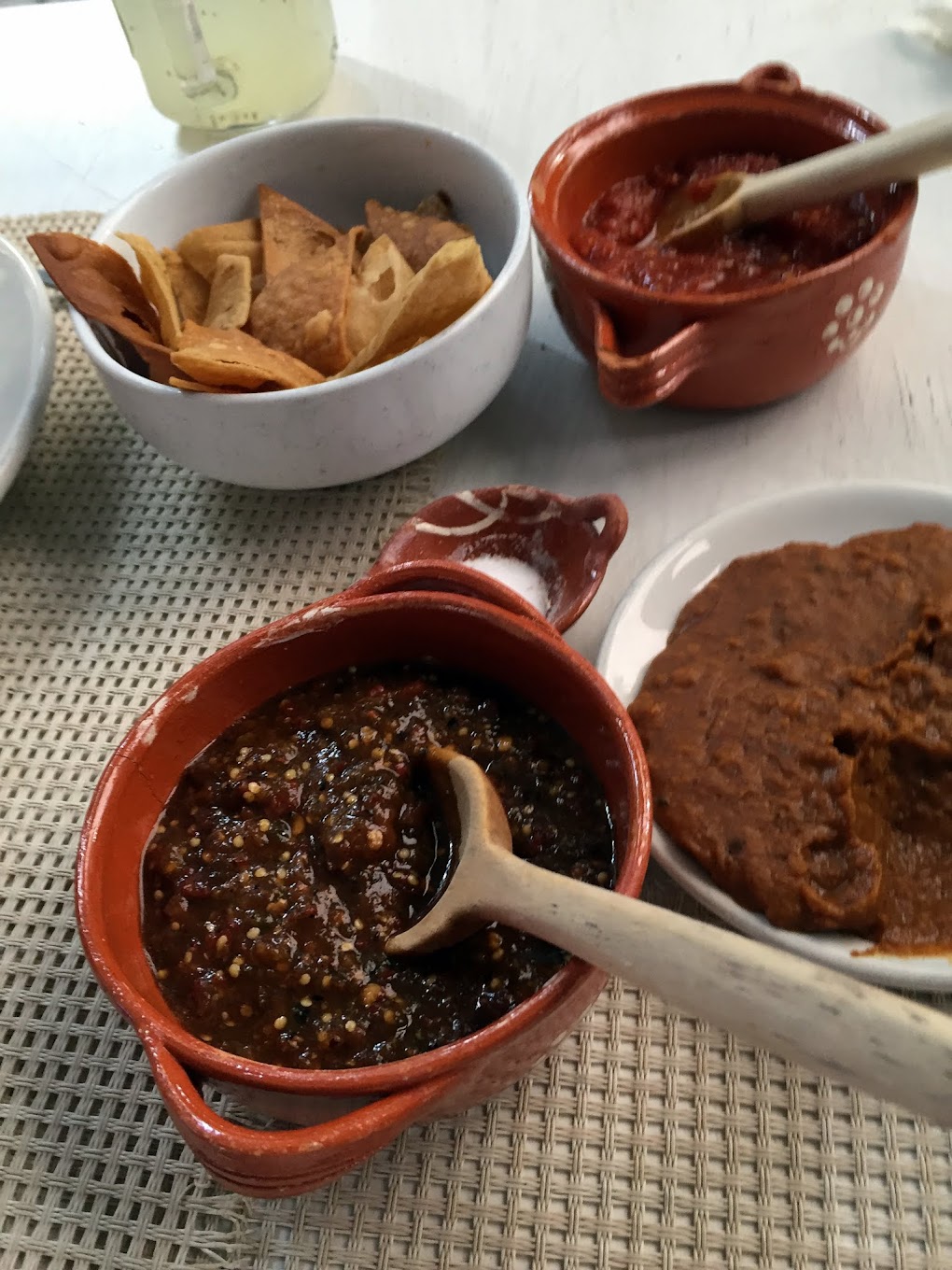 I started with a Crema Fría de Aguacate. It was very smooth, soothing and mild. 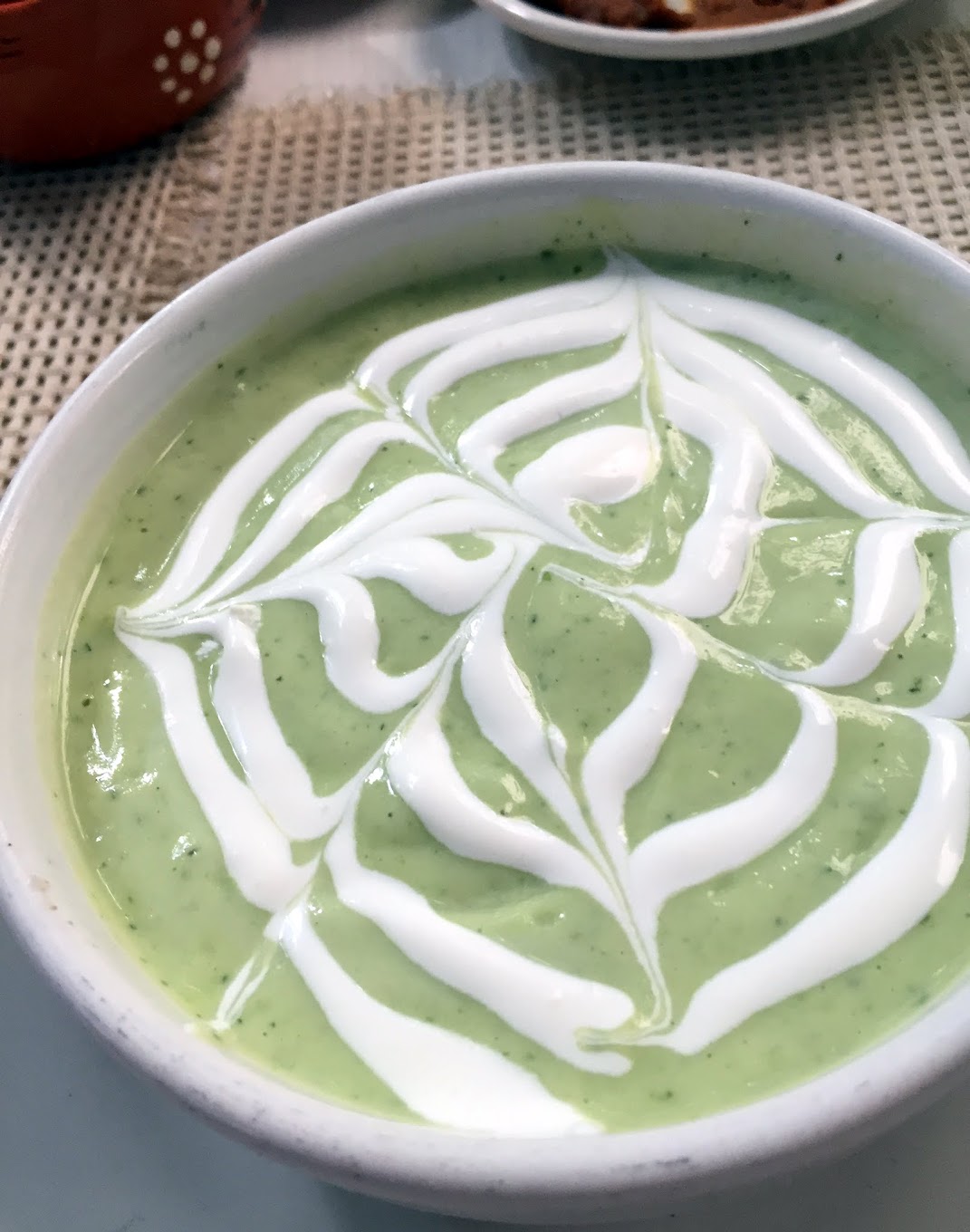 Sra. Cuevas had an Ensalada de Espinacas y Peras con Queso de Cabra vinaigreta balsámica. That was very nice, although I was surprised to see that the pears were cooked and seasoned. But when I tasted it, it was too heavy and the dominant brown color did not add to its appeal. I wouldn't order it again. 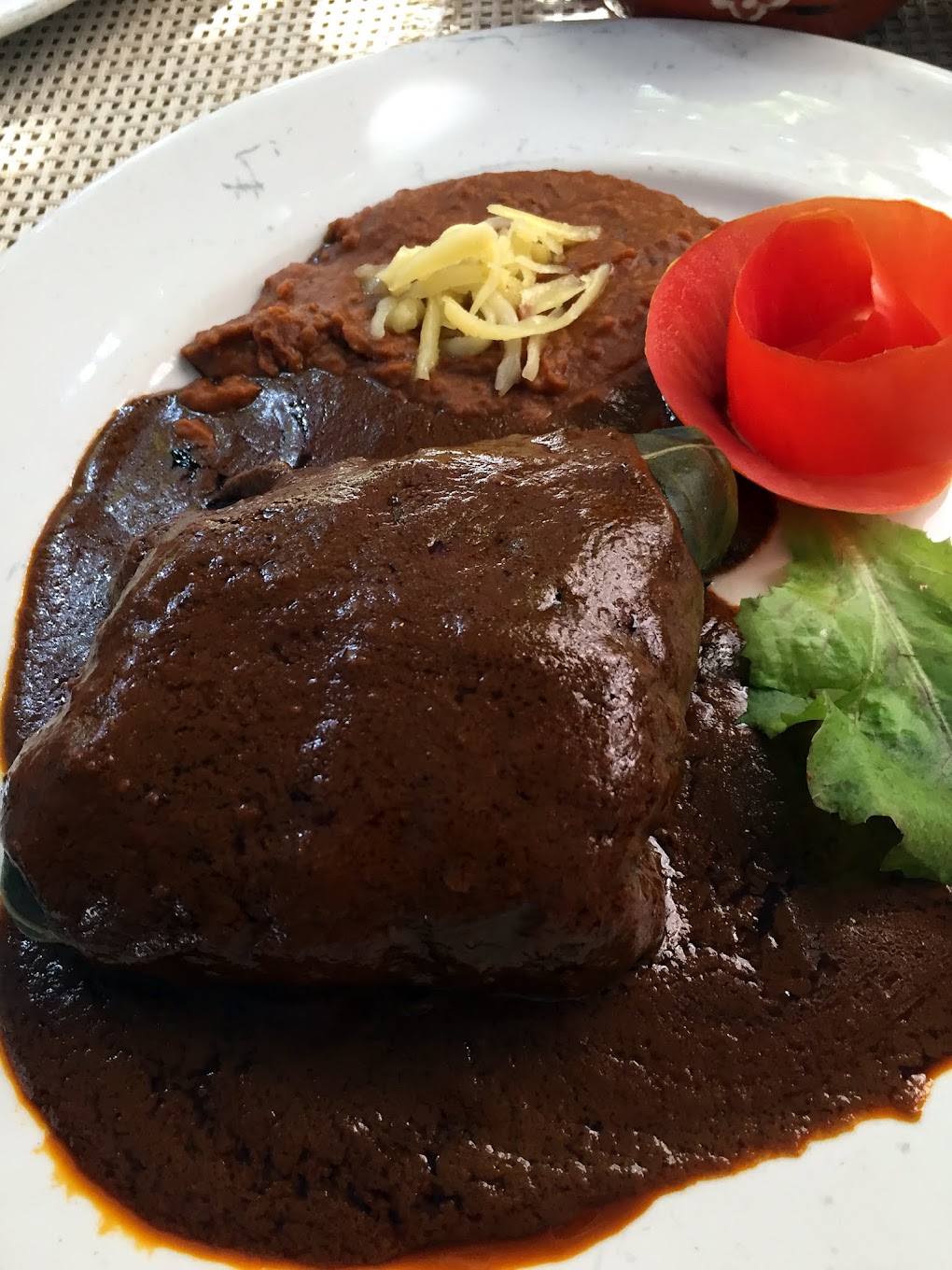 This next photo is an unidentified mystery, and appears to be pechuga de pollo con mole, but strangely, I don't have any notes on it and can't definitively identify it. Could it be a Chile Jaral of some sort? It must have been eaten by my wife. 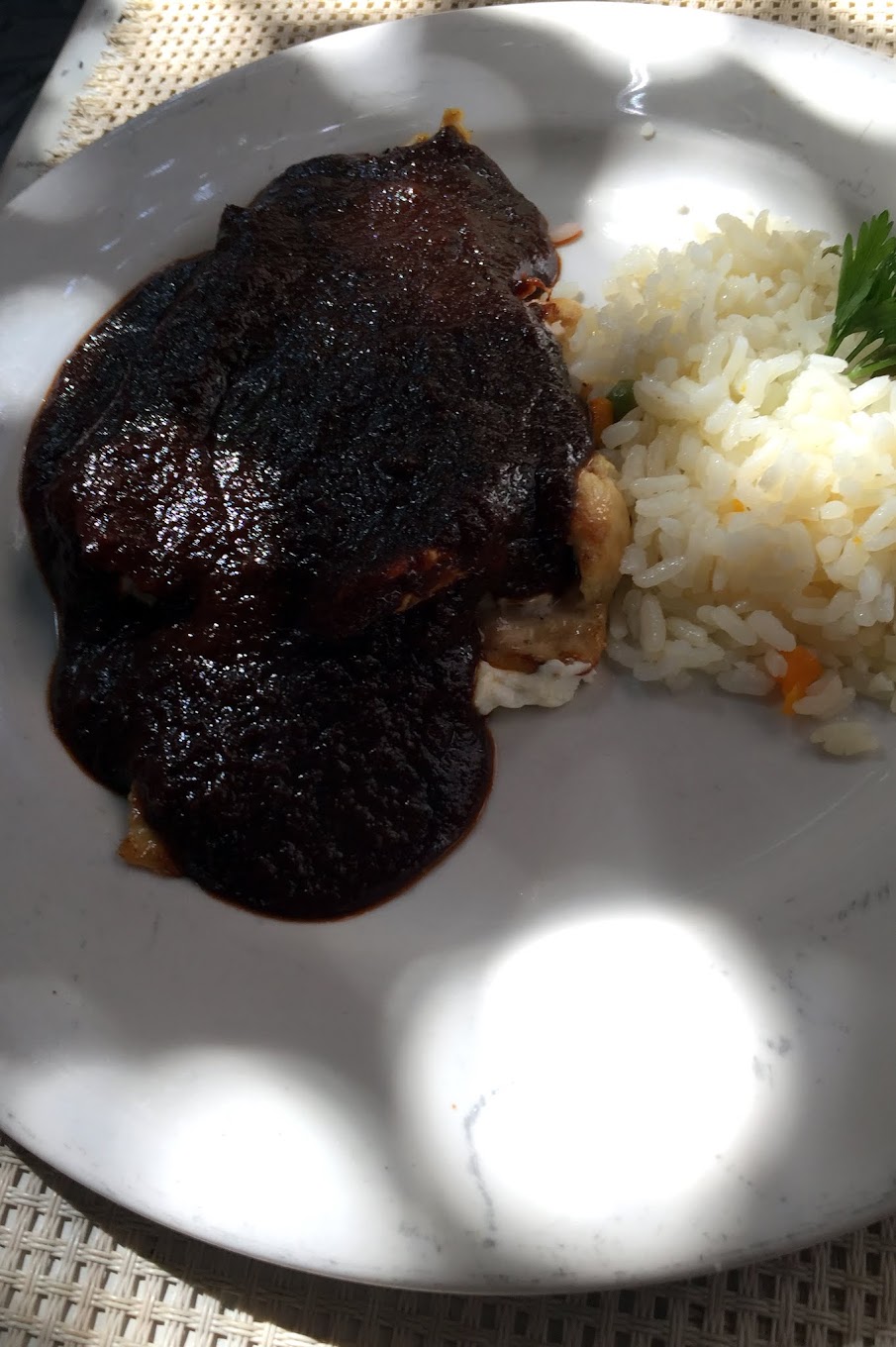 For dessert, I ordered a Crema Catalana, but the waiter returned to say that "se terminó". Not available. That was moments after guests at another table received one, with a glorious topping of golden spun sugar. I suspect that making two in close succession was onerous to the kitchen staff.

So, instead, I had a deconstructed Tarta de Manzana, which despite its somewhat disheveled look, was all buttery goodness. 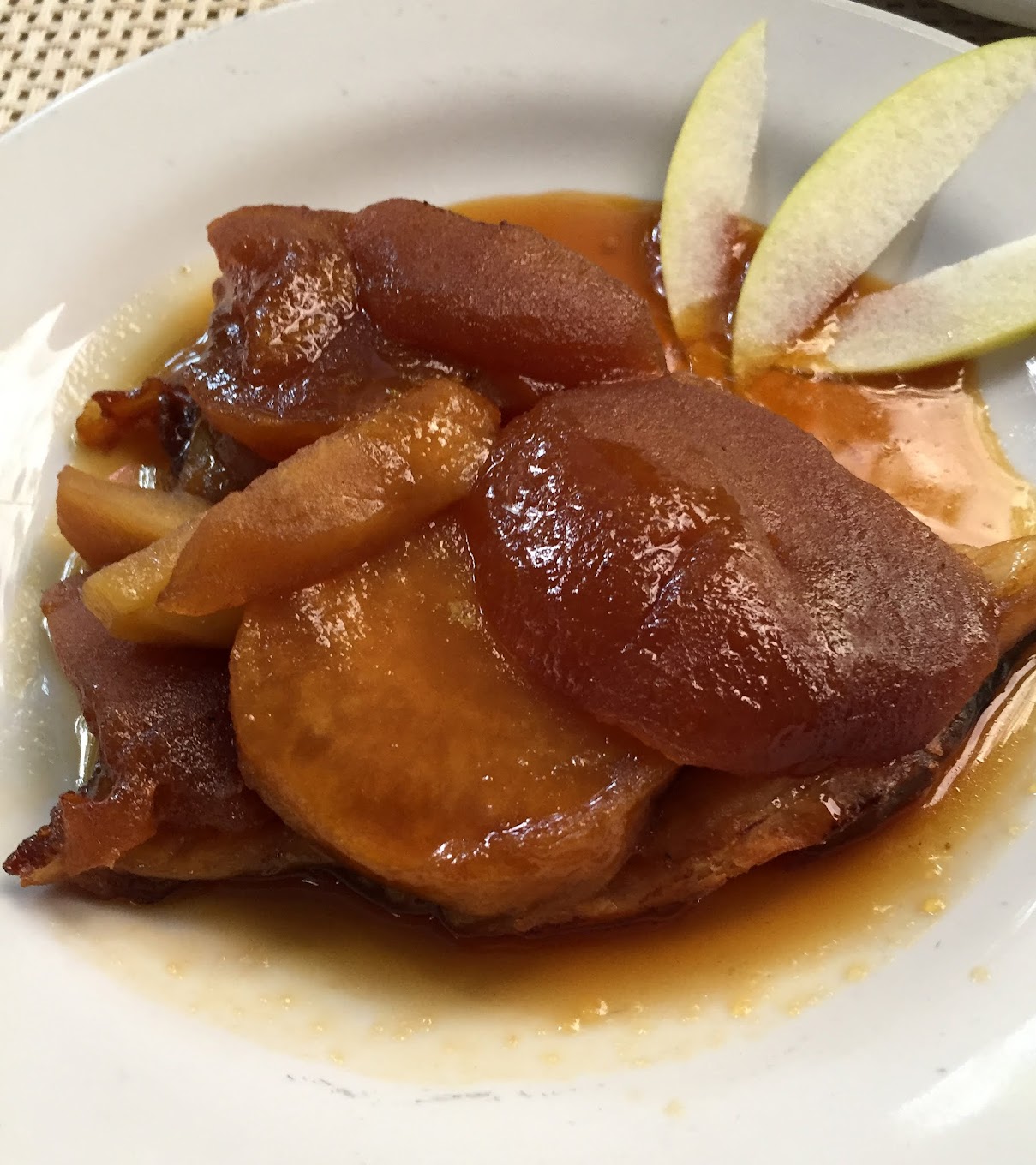 Cost: Sorry, I didn't photograph the check, but I do recall my surprise that the total was more than that at Los Placeres. I'd had a half bottle of a semi-dulce white Rioja wine which increased the total check.

Posted by Don Cuevas at 7:40 AM No comments: