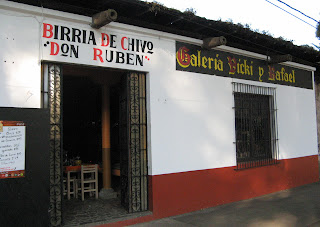 Avenida Lázaro Cárdenas laces up lower and middle Pátzcuaro, from la Estacíon to the edge of Centro. A short distance above the Glorieta Tangaxuan is the Galería Vicky y Rafael, parent to the former biker bar, the Bar Chopper. The Bar was a raffish neighbor to the Hotel San Felipe, now the Hotel Misíon Pátzcuaro.

San Miguel de Allende, Guanajuato. Cradle of Allende and Independence.
A quintessentially Mexican city of 80.000 Mexicans, but also home to over 11,000 foreign residents, either full or part time. Noted for its Colonial architecture and its galleries and shops. Notably more expensive than many other Mexican cities. There are so many U.S. expats that the State Department has opened a Consular Agency there.