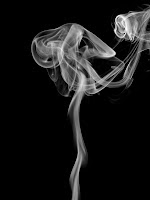 Had a BOING Lately?

There are some special added bonuses to riding intercity buses here, at least on the "AutoVías" lines, as from Pátzcuaro to Morelia. When the attractive hostess, standing outside the bus at her mobile desk checks your ticket, she also offers you a free agua purificada or a can of chilled Boing fruit drink. Who would reject such an offer and settle for water? Get a BOING in your bag. It will make that half of a sandwich de jamón y queso amarillo taste even better. So, sit back, and enjoy the movie with your BOING.

(Obviously, the attractive bottled BOINGs, as pictured above, are impractical for the bus lines. So we settle for BOING in cans, and are content.)

This fruit-pulp bearing, "natural", non-carbonated drink was first brought to our attention by our distinguished and erudite friends, Sr. A., and his wife, Sra. G., in Pátzcuaro.

He told us of the social and labor aspects of the company, a worker-owned co-operative, one hundred percent Mexican ownership. He made a point of contrasting this desireable situation with that of "Coca Gúacala", described by him as "El agua negra del Imperio".

BOINGS are great.. According to the entertaining Pascual Boing website, it is available in the following flavors: Mango, Guayaba, Fresa, Manzana, Tamarindo, Naranja, Uva y Durazno.

For further reading, here's a WikiPedia.org article on the Cooperativa Pascual Boing.

Posted by Don Cuevas at 4:05 AM No comments:

México! It's SO romantic! You can even cook by candlelight.
Don't ask when; it'll be a surprise.

I do a lot of my baking and cooking prep early in the morning, durante la madrugada. (before dawn)
Apagones (blackouts) are not unknown.

Just a couple of hours ago, I was preparing American Macaroni Salad for a cookout on Sunday on our new, Kingsford Barrel Charcoal Cooker.

The coditos (elbow macs) were boiling and eggs were simmering, when BLANK. The lights flickered and went out. I got a flashlight, located the candles in the trastero (dish cabinet), and lit two, so I could at least finish and halt the cooking.

I definitely was not going to continue slicing and chopping vegetables and herbs in the dim light. I went back to bed for a snooze.

As daylight came, with its sweet, fresh breath, I continued. The Macaroni Salad is a good foil for the spicy grilled Spanish and Argentine style chorizos, hamburguesas,ensaladas and Verduras Asadas a la Parilla we and our guests will enjoy tomorrow.

For the full menu, see my more recent posting, "Up In Smoke",

Not every meal is a big deal. What you read here represents less than a tenth of the foods we eat.

The other morning, for example, I made tortillas de harina for Burritos de Papas y Chorizo. The chorizo was the kind made by, or for Tienda Don Chucho, in Pátzcuaro. It's meatier and less fattier than your usual butcher block scrapings. 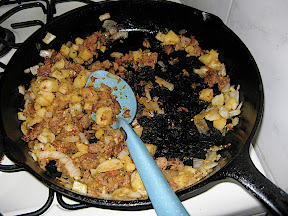 Here are some breakfast burritos I made from that. 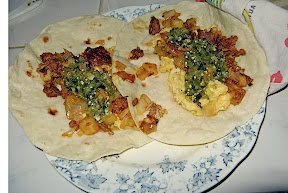 We're still working out the leftovers from this.

A few minutes ago, an ambulant vendor came by, selling dulces. Usually I don't buy this stuff, but this time, I was in the mood.

I got a nice, pale blonde cocada, or coconut ball. The usual cocada is very dark caramelized, with medium fine shreds of coconut. This one consists of wider strips. It's not as gooey as the usual. There's a faint taste of smoke to it, which pleases me, although it's a bit odd.

I also bought una palanqueta de cacahuates. This one is really good with lots of well-roasted peanuts in a brittle that may or may not be made of a brown sugar.
(below) 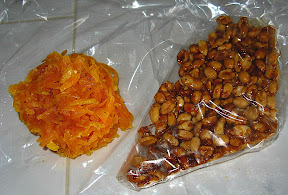 Yesterday I made Chiles Jalapeños En Escabeche, replacing the inferior, canned ones that had been in our fridge for untold months.
The technique follows. I posted it yesterday on an informal food forum.
For about 14 medium, green, fresh Chiles Jalapeños.
I sliced three ribs of celery, most of an onion in chunks, three peeled carrots sliced in medium rounds, 6 cloves of garlic peeled and lightly smashed ("cracked"). These are lightly fried in a large skillet with canola or other vegetable oil.

The washed, stemmed jalapeños are partially slit lengthwise in 3 places, then they pass through the hot skillet, tossing just until their skins start to blister lightly. The first vegs are returned to the pan of jalapeños and about 3 cups or so of boiling hot cider vinegar, a tablespoon of sea salt, a couple of cloves, also allspice and possibly a few black peppercorns are added. This is allowed to simmer barely a couple of minutes while a couple of pint or larger jars are cleaned and dried. The hot mixture is portioned into the jars, and if you like, a couple of drops of Asian Sesame Oil is added to each.

Wipe the rims and lid the jars. These are allowed to cool to room temp before refrigerating. They are "hot" but best eaten chilled. Eat cautiously. They should have some crunch left. (The best pickled Chiles Jalapeños locally are those served in Quiroga at the Carnitas stands on the Plaza. They are crunchy, hot, sour, and bite back. Just right to cut the luscious grease of lard-fried chunks of pig.) 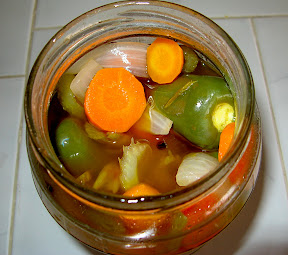 It's a lazy, rest day around here, and that's all I have for now.

Note that if you can't see the photos, please tell me.