El Rincón de Allende is a nice little coffee shop restaurant with good food, service and prices, just off a corner of the Plaza d'Armas in Morelia.

Recently, medical matters caused us to stay in Morelia's Centro Histórico for two weeks. Most of that time, we were grateful guests of our friend Rosa, who operates the Casona Rosa guest house and the Casa Rosa Suite #13. There were kitchens available in both the Casona and the Casa Suite #13, but apart from a few simple homecooked meals, we ate out a lot.


We were fortunate to stumble upon a very nice coffee shop restaurant, associated with the Hotel Historia, on Avenida Allende, between Av. Abasolo and Av. Galeana. This is just around the corner of the southwest of the Plaza d'Armas.

I first went there for breakfast and found it had well prepared food and decent coffee, good service, and the best frijoles I'd ever eaten anywhere. That first breakfast, I had a large orange juice, coffee, huevos albañil and tortillas for about $65 pesos. This is a breakfast that will set you up for the day. Of course, you can get eggs al gusto, any way you like, within reason. One morning I had a cheese, bacon and onion omelet that was the best omelet I'd had in México.

Most meals at El Rincón start with a small dish of rich, hot, frijoles refritos and a dish of crisp totopos. It's an irresistible combination, A few days, the restaurant must have been out of frijoles, because they served us instead a dish of fresh, hand cut salsa cruda. It's a nice change from the frijoles.

But the sublime, Platonic dish* is that of Frijoles Guisados, a variation of Frijoles de la Olla. It is simply brown beans cooked and served whole and richly yet subtly seasoned. An generous side order is (get this!) $10 pesos.

*of, pertaining to, or characteristic of Plato or his doctrines: the Platonic philosophy of ideal forms.

Other main dishes we've enjoyed are Puerco en Chile, browned cubes of pork in a bright red sauce. And Bistek en Chile, beef in a dark chile sauce, (this neared my tolerance levels of piquancy and salt) both served with sopa seca de arroz, the famous frijoles guisados and hot, handmade tortillas.

One day I was feeling slightly under the weather, so I ate only a bowl of the Consomé de Pollo, with a piece of chicken in it. The consomé, with only vegetables and no chicken is only $15 pesos, but a bit more with chicken. 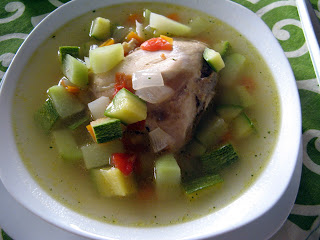 The aguas frescas served in the afternoons and evenings are outstanding. We especially enjoyed an agua fresca de ciruela, the peculiar yellow fruit grown hereabouts. Although "ciruela" means "plum", these are nothing like plums as we knew them. A generous pitcher is only $40. We once followed up with a half pitcher of delicious agua fresca de guayaba (guava).

Many customers seem to like the various enchilada plates, among which are rojas or verdes, and the apparently very rich and creamy but not picante enjojocadas, which are tortillas dipped in tomato sauce and enriched with jocoque. The regional specialty of Enchiladas Placeras con Pollo are available, too.


A recent afternoon saw the two of us eating Milanesas de Pollo, perfectly prepared. (All it lacked was some tonkatsu sauce.)

Service has been very good, although on my last morning there, there ensued a confusion of order fulfillment worthy of a People's Guide To Mexico anecdote. I ordered a torta de huevos revueltos y jamon con frjoles refritos, a tall glass of orange juice, to eat in.

The waitress seemed a little confused, so I explained again what I wanted. A few moments passed, and she brought me a plate of scrambled eggs and ham and beans. I thought, "Fine! I'm adaptable." She asked if  wanted toast, but I didn't, so she brought me hot tortillas, which was o.k. By me. Then she brought me the missing telera/bolillo roll, sliced, which by then I didn't want.

The denouement came with the appearance of a torta de huevos revueltos con jamón y frijoles refritos, just as I thought I'd originally ordered. I politely declined, saying that I wasn't that hungry, there had been confusion, but I was content with what I'd had. All in confused good humor. I hoped that they could eat it. That breakfast was typical in price: $68 pesos for the ham and eggs, beans and two large glasses of freshly squeezed orange juice.

Would we go back? Yes. We ate there at least 6 times in two weeks.

The numbered address"A" on the Google map was located erroneously two blocks to the east. The map below shows the more or less correct location at the green arrow, but the number is incorrect.

UPDATE
It pains me greatly to report that through our friend, Bob Williams., who lives in Morelia, we have just learned that El Rincón de Allende is no more. It has been converted to (I can hardly bear to write this.) a vegetarian restaurant called "VEGETALIA". It is a name that for me evokes images of carrots and potatoes.

I've eaten here many times when I made a trip to Centro and always found to be a gem. Unlike some of the places in the area, they aren't trying to make the restaurant appear to be more than it is or expensive simply because it is in Centro near Plaza las Armas.

It is simply good food, well served and well priced. No pretention. There is a lot to like about that idea.

This sounds good, Don Cuevas, thank you. Next time in the Centro we will give it a try.

Too often many of these restaurants downtown try to be innovative and end up creating a gastronomical disaster. There is a lot to be said for simple foods that are well-prepared.