Finally, on the following Sunday, we met our friend, Ms. L. there. We guessed correctly that Sunday was probably their busiest day. There was immediate seating available on stools at a skinny counter outside, but we were willing to wait for a table. The wait was only about 15 minutes, and we were given a table to share with a young family. 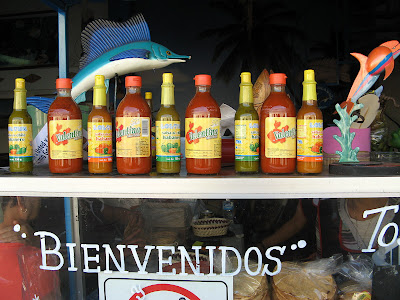 The dining room looks as if it were a set for a tropical island castaway film, in vivid color, dominated by tones of blue. The walls are beautified with life sized photo murals of tropical beaches and lagoons. Mock toucans perch in their hoops, but the main focus is the magnificent blue spiraling metal staircase, reaching up to an open hatch in the ceiling high above. 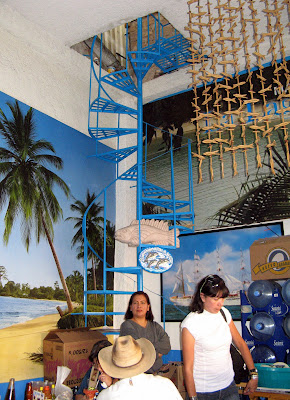 The scene seemed one of managed but workable chaos; the three servers bobbing and weaving amongst the tables, to and from the hot food kitchen at the far end and the cold seafood bar near the entrance. The occasional errant street performers took their turns in the “spotlight”, among them the Andean pipes player selling CDs or the a capella basso, below.


During our wait, we’d had time to look over the menu (partial). There were hot platillos of fish and seafood, as well as caldos, but we started tentatively with cold seafood dishes. L, as is her custom, requested a variety of four seafood tostadas, among which were camarones, ceviche de pescado, pulpos, and marlin. The marlin never came, as the kitchen was out of that item. The three tostadas were large and sufficient.

The independent minded Sra. Cuevas had a coctel grande de camarones followed by a tostada de camarones in lieu of one of marlin; and I had the extra grande “chabela” of camarones y pulpos. The mariscos were fresh and cooked perfectly but those in the cocteles were marred by a sauce heavy with a low quality, ersatz “catsup”, in which the starchy thickening agent was very noticeable. We remedied that defect somewhat with liberal applications of salsa picante and fresh lime juice.

On our next visit, we will request our cocteles sin catsup, más cilantro or perhaps will select a hot seafood or whole fish platter.

Food: a qualified ***, due to the catsup and a limited sampling.
Service: ***1/2  They tried hard to please, although the place was very crowded.
Price: $-$$ Bargain
Ambience: Crowded, noisy, chaotic, colorful by nature, fun. ¡México!
Hygiene: ¿Quien sabe? We felt fine the day after.
Rest rooms: not inspected.
Hours: 11:30 a.m. To 5:30 p.m.
LIVE MUSIC ADVISORY: Count on it!
Not suitable for a romantic, quiet dinner.

The location on this Google Map is imprecise but close. See the green arrow place marker.


View Larger Map
Posted by Don Cuevas at 5:00 AM

Excellent post Mr. Cuevas. Beautiful pictures. I could go for a tostada like that. That is huge. The Chabela looks great too. Thanks for sharing. I like that you give directions as well and if I were there I'd definitely go and try it out at least once.

I am ready for another visit. This heat has been terrible.

Steve; when were were deciding where to live in Mexico, we chose the Pátzcuaro area, first of all because of its temperate climate. There were other reasons as well. And Pátzcuaro is usually several degrees cooler than Morelia.

It has been cold here at night and in the morning, with ground fogs until about 10:30 a.m. Then it becomes pleasantly sunny and warm. About 5:00 p.m. It starts to cool off.

We have had a couple of unseasonable rains in the afternoons this week.

Just about the only time that it gets relatively hot here is in April and May.
But you've already heard all this from "Felipe Zapata".