First, select your chicken; with care, it will provide several meals. 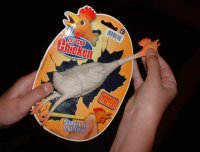 I picked over and rinsed about 2 cups of dried garbanzos and put them to cook at low heat in plentiful plain water. The second step was to make a vegetable broth. I cut up onions, garlic, carrots, celery (with the leaves) and dried epazote (a powerfully medicinal smelling herb) and salt and pepper, and brought it to a boil. Meanwhile, I washed the chicken in cold water, salted it with coarse kosher salt and let it rest for 30 minutes. When the vegetables came to a simmer, I rinsed the excess salt from the chicken and submerged it in the stock. I let that come back to a boil, turned down the heat to a simmer, covered, and let cook 20 minutes with a cover. At that point, I turned off the heat, and let the garbanzos and the cicken rest for 2 hours while I took a nap.
Back at the stove, I continued cooking the garbanzos, but with a little epazote. When they started to become tender, I put in a little salt. The chicken was removed from the cooking liquid and the stock strained. All these components were refrigerated overnight.

Day two; I began by removing excess fat from the stock and discarding it. Then various vegetables were prepped: Susan trimmed the ejotes. I peeled and chunked new carrots, celery and cut up the calabacitas and the chayotes. (I should have cut the latter a bit smaller, but they were ok.) I put the ejotes on to cook in lightly salted water in a separate pot. Meanwhile, the freshly cut carrots and celery went into the chicken-vegetable stock. When I judged them "right", in went the chayotes and then the courgettes. After that, the par-cooked green beans. I poured in the garbanzos and their liquid. (Could have used more, but it was ok.)

While all this was going on, a pot of plain, white steamed rice was simmering on the back burner, while I removed the skin from the chicken and hacked it into serving sized pieces. I washed a good handful of parsley and cilantro and chopped it coarsely, for a last minute addition to the soup kettle. When I tasted the stock, it seemed a bit weak, so I boosted the salt a bit and 'cheated' with a heaping tablespoon of Knorr-Suiza Caldo de Pollo en polvo. The chicken chunks were reheated separately in some of the stock.

The assembly/plating was as follows: a largish, deep soup bowl, a scoop of hot rice; vegetables and stock to cover; then two pieces of chicken meat. Finally, two slices of aguacate for a garnish. Small, Mexican lime halves in a bowl were passed to squeeze on to the soup, and a small amount of ground red chile was available to spice things up. It was very tasty, soothing (made me sleepy), and I was too sleepy to take a picture. We ate two bowls each, the second one without any chicken. This is great, "down-home" food; comida casera at its best.
Posted by Don Cuevas at 5:34 AM