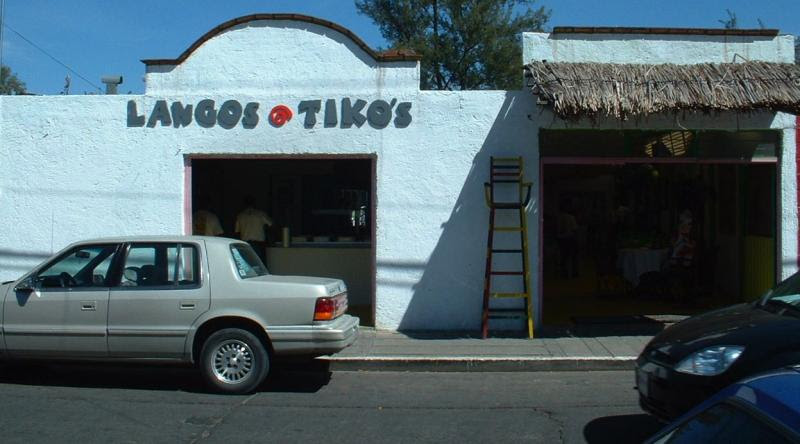 I know, I know: this blog is supposed to be about my Mexican Kitchen, but sometimes we eat out, and yesterday was a special occasion, so, there it is.

There are numerous excellent seafood restaurants in the Morelia-Pátzcuaro area, but when you want something a bit out of the ordinary, something with a little creative flair, I recommend LangosTiko's Restaurant in Morelia.

We spent New Year's Eve Day with our neighbors, Geni and Larry, in a shopping cycle of 4 or 5 big stores in Morelia.
Actually, we'd intended to go to Restaurante Amazonia, on Camelinas, a few blocks east of Star Médica, for "Carnes a la Espadas", but when we got there, it was closed for the New Year's weekend. Fortunately, our other top choice, LangosTiko's, was nearby, on Avenida Santamaría, about 2 blocks south of Avenida Lázaro Cárdenas, and a short distance north of the lateral that houses Amazonia. (The trick is to know which streets are one way, and where a left turn is allowed.) There was plenty of street parking, but for peace of mind, we parked in the estacionamiento next door, for 5 pesos an hour.

The restaurant was open, yet the afternoon rush had not begun. That gave us plenty of time to torture ourselves deliciously with the very tempting menu specialties. (Almost everthing is listed under "Especialidades".)
Three of us wanted to have the Sopa de Ostiones , Susan ordered the Pulpos LangosTikos, which she'd enjoyed on a previous visit; but first we ordered our drinks. There is a nice selection of national beers, although I had "Tequila Bandera". In keeping with the colorful, casual creativity of this restaurant, there is also a specialty drink, "Michelada LangosTikos", which is a red beer in a salt-rimmed goblet with a generous portion of boiled shrimp and raw oysters. I'd had that on a previous visit, although I got it without the oysters, which I avoid eating raw in México. While we sipped and read the menu, we nibbled on tostadas spread with the "Ceviche Hawaiiana", not really a ceviche, but a tangy spread of seafood bits in a spicy mayonnaise reminiscient of a remoulade sauce.

The Sopa de Ostiones is prepared tableside, a gimmick which normally doesn't attract me, but in the casual, palapa thatch covered; gravel- or deck-floored ambiance of LangosTikos, dried puffer fish hanging over the table, whiskers from an indigenous mask tickling the back of my neck, while I sat perched close to a 3 foot drop behind my chair, it enhanced the experience. We all three enjoyed the soup, although I found it to be somewhat different in overall sabor this time; perhaps the "Toque de Pernod" had been applied with a lighter hand.

We made our choices, and as the restaurant began to fill with large groups of customers, we placed our orders:
Larry, the Camarones Rellenos; plump shrimp, split and filled with queso asadero, then wrapped in bacon and fried; Geni, Filete Comonfort, a filet of delicate fish in a white wine cream sauce, further enriched with melted cheese atop; Susan, a brocheta of large, grilled shrimp and sweet peppers; I, Camarones a la Cazuela. This dish involves no casserole, but is described as shrimp sauteed with garlic and slivered onion, in a Spanish Sauce with red wine; bacon and slivers of chile serrano on a bed of spaghetti. It sounded a bit "busy" in the menu description, but was a delicious combination, notable for the generous quantity of shrimp, the crunch of fresh chiles, and especially the vivid green spaghetti, greener than any spinach pasta I'd ever seen. Maybe it was cilantro spaghetti.

All were pleased with their selections, although perhaps the cheese on the Filete was a bit over the top, and the bacon, although delicious, detracted somewhat from the shrimp on the brocheta. My only quibble is that the bread in the basket is a truly ordinary pseudo-baguette. But I can overlook that. We would go back again.
Drinks were 4 beers, one tequila bandera, 3 aguas minerales.

We had no room for dessert, but we walked 8 blocks or so north, across the "Río", to Hornos Ortiz, to see the Christmas display, all made from bread dough, and the magnificent Roscas de Reyes (Three Kings Cakes) being decorated with candied fruits, in floral and other designs. The bakery has been beautifully enhanced by a new, central checkout bar and new display shelves. We lamented not having brought our cameras, a sore point further emphasized by the blazing sunset igniting the clouds in the western sky as we drove home.