I've been pretty consumed lately by the U.S. election, the growing violence in México, and the collapse of the U.S. and world economy. Not that there's much I could do about them. But I still can write about foods we've encountered, eaten and cooked.
Today I have only a few short, food-related comments to make here.
On Tuesday, I stopped in to say hello to our friends at the Mesón de San Antonio Hotel in Pátzcuaro. La Señora, Lupe, gave me a generous gift of limones from their trees and a huge bag of chayotes blancos, which I soon learned are locally called apopos. These are the more delicate cousins of the pale green chayotes and the infamous spiny chayotes verdes. (Below) 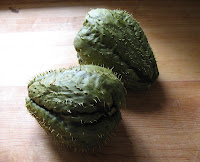 I washed 4 to 6 of the apopos, cut them in quarters, and added them to a Sopa de Verduras I was simmering. The end result is very delicate, with the nut-like seed relished by conocedores.

I realized that there was no way we were going to be able to consume so many apopos ourselves, so when an opportunity arose, I gave them away. Our landlady, Sra. Chucha, was coming up the street to her house with her sister, also Lupe, and another friend. Sra. Chucha was very glad to receive the apopos, for not only would she cook some, she planned to plant a few so that she could add this fruit to next year's food crops.

After the sister and friend left, she and Mateo continued sorting the huge costales, (gunny sacks) woven of coarse but handsome cloth, full of this year's harvest of recently dried frijoles. This task was done while kneeling or squatting on the concrete patio floor
Their family friend Casimiro (and probably a relative) had presorted them, but they did not meet Chucha's strict standards. Thus, they sorted them over again, atop a guangoche, a coarsely woven square of cloth with cloth "handles" at each corner, in order to let the dirt sift out, while they laboriously picked out small stones and twigs. As the pile of cleaned frijoles grew, Mateo scooped them up into a well made wooden box with interlocking dadoed (? I am not a woodworker) corners. Twenty boxes full and the new costal was filled.
There's a special term for a costal de veinte medidas, but unfortunately, no lo entendí.

As they worked, I was thinking of my camera, sitting in the house 200 feet away, but I thought it somewhat discourteous to run home to get it. Besides, I was tired.

Our neighbors broke out about a kilo of the colorful, mixed frijoles to give us. I'm cooking some today with salt, a little garlic, and chopped onion. They smell great.

We made a brief trip today to the Patzcúaro mercado, where we found an older and a younger man, selling teleras rolls. The younger man had the task of wearing the massive woven straw basket on his head, while the older man, ignoring the tongs, would fill the plastic bags for the customers with his hands. I filled my own. These rolls, 4 pesos each, are nicely formed, well browned, with a decent crust; not like the sloppy work that passes for teleras in a nearby, well-known and popular bakery. The older man told me the name of his panadería twice, but I didn't understand it. I did understand that it's located near the Central bus station, that the bread is hearth-baked (with no intervening baking sheet between the bread and the hearth); and the oven is wood-fired. I'd never seen these folks before, but I will be looking for them again.*

We will heat up some albóndigas al chipotle from our freezer, make tortas de albóndigas; have some frijoles, possibly some (green chard), and that's our comida para hoy.

The last item for today was the surprising discovery of a stand in the mercado that had yellow lemons available. These are rare in Mexico. Because we'd just received a kilo or two of regular limones verdes, I only bought 4 limones amarillos. When we got home, I cut one open. The flesh is pale green, and the aroma is a bit different from the yellow lemons to which we're accustomed, but these are very close.

*Follow up on those rolls: although they looked good, and had a nice toasted exterior, the crumb was as bland as any. Most of all, they lacked salt. They served well with a big bowl of Caldo de Res y Verduras, but I won't be looking for them again.