Holstein: Variations On a Milanesa 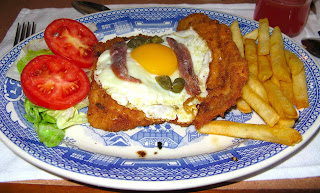 Pardon my Alemán. I've never studied that language. But I got enthusiastic yesterday when I spotted Milanesa Holstein on the menu at Sanborn's Restaurant at Plaza Las Américas in Morelia. It's true that I was first drawn to the Sandwich Caliente de Pavo con gravy; but having had a very disappointing earlier experience with that at Sanborn's Centro Histórico Morelia, my eyes leapt to the Milanesa Holstein. There is also a Milanesa Italiana or perhaps Parmesana, which the colorful photo menu explains as in a tomato sauce with gratineed cheese. It looks like "Chicken Parmesan", with the chicken standing in for veal.

I'd better explain what Schnitzel (or Milanesa) Holstein(er) is. A thin slice or meat, originally veal, but could be pork or chicken, is pounded out thin and breaded then fried. For the Holstein variation, the fried schnitzel is topped with a fried huevo estrellado. (See my previous work on How To Order Eggs Without Fear, here.) The fried egg is garnished with a couple of anchovy fillets and a few capers. The latter two are among my favorite condiment foods. Put a small order of Papas Fritas, and you've a rare treat when you are surrounded by enchiladas and comida típica Mexicana.

Where did the milanesa originate and how did it come to Mexico? For illumination, I turned to www.wikipedia.org and the article on the Wiener Schnitzel and variations.

Here is some relevant historical context:

The dish may have originated in Milan, northern Italy, as cotoletta alla milanese, and may have appeared in Vienna during the 15th or 16th century. According to another theory, it was introduced in 1857 by Field Marshal Radetzky, who spent much of his life in Milan. The term Wiener Schnitzel itself dates to at least 1862.

The article is a bit thin on Mexico and its adopting of the Milanesa:

Thinly sliced beef breaded and fried is also known as "milanesa" and is a popular ingredient in "torta" sandwiches sold in street stands and indoor restaurants in Mexico City.

I theorize that with the French invasion and occupation of Mexico in 1862 to 1867, and the placing of Emperor Maximilian of Austria on the throne, Central European dishes were introduced to Mexico, including the schnitzel-milanesa, and, I'll throw in pasta hojaldre (puff pastry for strudels and other flakey treats of pan dulce.)

Earlier, Hapsburg Austria dominated northern Italy, and Lombardy, where Milan is located, and this food may have migrated northward to Austria. From there, it traveled to Mexico, where it is ubiquitous, and most prominently used in tortas. (Mexican "sub" sandwiches) Those milanesas are often of poor quality; tough and badly fried. For a really good Milanesa de Pollo, served plated as a lunch or dinner, I recommend those served at the restaurant of the Gran Hotel in Pátzcuaro. Now I can also recommend those at Sanborn's Plaza Las Américas location in Morelia.

So, what's the Holstein connection? Holstein is a county, part of Jutland, in Northern Germany. How does that explain a fried egg with anchovies and capers?

MyGermanFoods.org has this explanation; believe it or not as you wish:


Holsteiner Schnitzel, a veal fillet (pork can be used instead) breaded and browned in butter and topped with a fried egg and an anchovy was the favorite meal of the great 19th-century Prussian diplomat Friedrich von Holstein – who liked to eat in a hurry – so he had his appetizer and main course all on one plate.

This concludes my light-hearted investigation of the schnitzel-milanesa in Mexico. May your next Milanesa be a great one.

I am surprised Michael, Sanborns??? You could eat all week on what they charge over there....Was it a special occasion? Or just a trip to Morelia.
Now I will have to try that, but I'll have to save up some pesos first!
Next time venture out and try my fav comida corrida place 3 doors away from the immigration office, 4 can eat there for what your one dish cost at Sanborns, but they don't have WiFi.......

Constantino, as I probably didn't explain here, but did on Michoacan_Net,

"Mexican food can be delicious, but when you find yourself up to the ears in enchiladas, it's time for a change.

Yesterday, we were finishing up some errands in Morelia, and I got an urge to go to Plaza Las Américas and have lunch at Sanborn's."

By the way, who's Michael? My name is Don Cuevas.

that looks wonderful-except for the anchovies. you've inspired me to cook today. think i'll try making some chicken milanesa.

i know what you mean about a change in food when you are surrounded by a certain type. when we lived in sicily we couldn't find anything but italian, which we love, but needed some variety. when we went to rome there were lots of different choices. had some great japanese food in denmark and loved my wiener schnitzel and papas fritas in germany.

i always used to wonder why oompa music is so popular down there. when i asked a native, he told me it was because of the time maximilian ruled. always interesting to learn new things, like all those facts you wrote on milanesa-thanks.

have a great day!

Makes my mouth water, as I am anticipating my annual 2 week trip north to the "old country." I, too, am in need of a change and the non-Mexican food where I live is normally a terrible immitation of something I crave. Very disappointing! The first time I ever had the veal Holstein was in that famous old "Swiss" restaurant in México City,in the 60's. It was delicious! I think the restaurant still is there, but have forgotten its name. I don't trust the Sanborn's in Maz, so I will wait to order that! Dee

I am German and living in Patzcuaro.
Yes, I grew up with Holsteiner Schnitzel in Holstein-Germany.
I better go there...it sounds wonderful.
Brita

John, have we ever met?

Really, I'd never had a Holsteiner Schnitzel before, so I have nothing with which to compare it. Maybe that's an enviable situation.

I'll be interested in your opinion on the schnitzel at Sanborn's.

PS: Have you ever been to the Restaurante Campestre Aleman, near Arocutín, en route to Eronga? I never have.