Since our first visit to Pátzcuaro, in 1991, we have become fond of Atole de Grano. To me, it represents the quintessence of simple Michoacán cooking.
Late one peaceful and quiet night, we were sitting in the Plaza Grande contemplating the past events of the day; just a couple of guys, an atole vendedora and us.
With little idea of what it was, we ordered two bowls. The cheap pottery bowls held a hot broth of corn kernels, slightly thickened with masa and subtly flavored with anise. We were offered minced chiles and a cut limes to season the soup. An “elotito” or cob-ette of corn was included at no extra cost.
It was soothing to the soul as well as the stomach. There’s neither meat or fat in atole de grano.

That was the last time we saw that señora, but in later years we found the two sisters-in-law who have side-by-side stands on the corner of Plaza Chica and Calle Iturbe. They appear about 4 p.m. and stay until about 10. The price has risen a lot since that first taste, but it’s still affordable, now at $14 MXN, about $1.10 USD.
Recently, our amiga, María de La Luz Barriga (The same María of “El Tejabán de María”) invited us to participate in the cooking of a quantity of atole de grano. We would have it after the dance exercise class which takes place two days a week in her patio.


On Tuesday, we went to the Pátzcuaro mercado, where we bought 9 elotes (ears) of young corn. Really, it wasn’t enough, A minimum of 15, or even 20 would have been right, but we didn’t know that. It is early in the season, and elotes are costly. We bargained price of 3 for $10 MXN.
In the end, the atole came out well though thin in granos (kernels) but our frend Rosa ate 4 good sized portions, proof that it met the test.
The ladies who sell it on the Plaza Chica cook it in large ollas de barro (clay pots) over lumbres de carbón (charcoal fires) all the while stirring with a long, hand carved wooden cucharón ( large spoon or ladle). 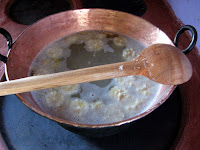 María lacked the cucharón, and we picked one up in the mercado for a mere $15 MXN. The first spoon vendor asked Doña Cuevas for $40 but went down to $35. Híjole.
Doña C. went inside the covered mercado and found a stall where the same size spoon was $15. This supports my theory that the highest priced vegetables and fruits stands tend to be closest to the Plaza Chica, while the cheapest are at the upper end of Calle Libertad, at the west end of the mercado.
Later in the afternoon, we walked to María de La Luz’s casa. We greeted each other with abrazos y besitos. She’d already prepared the anicillo, a small, low frondy green herb with a distinct taste of anise. It had been cleaned, chopped, boiled, infused but not strained. 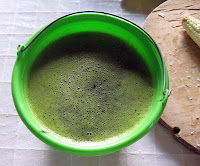 Instead of a olla de barro, María used a cazo de cobre (copper kettle) on a terracotta colored chimenea, or wood burning stove in one corner of her kitchen. She does have a gas stove, but special traditional foods are best when prepared with traditional implements. (See El Tejabán de María.)


The wood fire was lit under the terracotta colored chimenea. 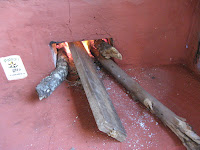 The water in the cazo came to a boil as María and her helper shucked corn. Then 3 were selected to be cut into elotitos and immediately placed in the boiling water; the rest, desgranizados, the grains cut off with a knife, then added to the cazo. Two sliced and seed chiles perón were added to perk up the flavor. 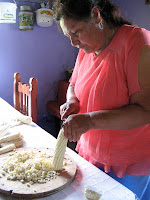 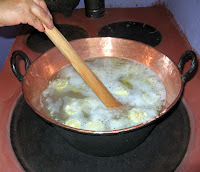 All was left to simmer, with occasional stirring, while the thickener was prepared. A huge lump of masa still fresh from that morning's milling was put into the cubeta (pail) of anicillo infusion, then stirred with the hands. 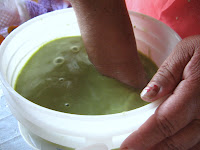 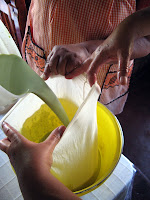 The next step was to strain the thickener mixture through a finely woven cloth bag, a talego. I believe that it's used in cheese making for draining curds. There's a short video of this below included in the slideshow.


Constant stirring was necessary, from the bottom of the cazo, so that the slowly thickening atole would not stick and burn. I took on the task, so that María could go out to the dance exercise class. She advised me to stand to the side of the stove "para que no te calienta la panza"; (so that it didn't heat up my belly.)
I leaned my knees against the red pigmented stove as I stirred.
María came back and mixed a handful of plain white flour in water to further thicken the atole. Salt was added and we tasted it.
As the exercise class ended, the cazo was brought out to the patio, where Rosa served it in whatever mugs and bowls could be gathered. Everyone got an elotito. It wasn't a perfect atole, but it was very satisfying. We had cut limes and chopped chiles to add as we wished, but no onion. 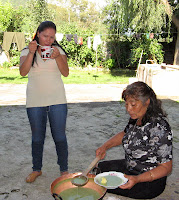 Someone noted that the knees of my trousers were terracotta red, from leaning against the stove. I was able to dust off much of the pigment, and the rest came out in the next washload.

After, we said "adios" and arrived home just as the first raindrops fell. Don Cuevas - What a great report. I can almost taste the food! Photos and videos wow - I am impressed.

The copper pot - I WANT ONE!

Where do you get the talegos - also want a couple of those. Are they bags she makes from cheese cloth?

Lovely post. And I´m wondering what the anise-flavored plant is. We had several wild ones in Guanajuato. One of them frondy with a miniscule blue flower.

Rachel: We will have to investigate further the botany of "anicillo"

Calypso: I'm certain she doesn't make the bags, but, on the other hand, she's an accomplished costurera. I shall have to ask.

reading your posts about food always makes me hungry. that meal you prepared for your new neighbors sounds, looks great. i still hope to eat some of your cooking someday. i'm the one (one of many that is) who praised your pizza dinner some months back and said i had hoped to go their for our 30th anniversary next year and that you could dupplicate. doesn't look like we'll make it then, but hopefully sometime in the not too distant future.

cynthia of cynthia and mike's blog came over for lunch on sunday and wrote a post about their visit. just thought i'd mention it in case you'd like to put a face to this commenter. just google cynthia and mike and go to their august 15 post. if you like the seattle area, she has some great shots from a trip to alki beach yesterday.

That atole looks wonderful, I've got to try it, though I lack the copper pot, the right stove and anicillo. Guess I'll have to improvise. I'm always looking for traditional Mexican foods to try that don't contain meat.

WHERE ARE THE PICKLES?

Your post about them leads to an eror page:
http://mexkitchen.blogspot.com/2010/08/pucker-power.html

I love pickles, especially if I can make them at home. Recently I was delighted to find some nice cucumbers in the Pátzcuaro mercado that were more suited than the usual overly mature, watery, seedy stuff found there.

Don Gringo, i sent the pickle post back to my staff writers as i wan't satisfied with the way it was wfitten. It may appear in the near future. Meawile, see "Hironymous Gherkin Exposed", posted about July 27.

Is that dance exercise class still going and open to the public?

Robert, it took me a moment to recall what you meant. I think that the class would be still going, but for the moment, our hostess is recovering from some fractures of the ankle and foot.

As far as it being open to the public, i don't know. It's a kind of local deal, and by invitation, I would think.Saludos, Don Cuevas.