Although we'd been to La Mesa de Blanca in Ziracuarétiro several times, our visit to its younger sister restaurant with the long name, "El Gorjeo de Las Aves En Las Mañanas de Abril" had been but once.
We decided it was time to renew the acquaintance, and accompanied by our friend, Georgia, returned on Sunday, September 12, 2001.


We arrived just after 11, and other than one other table, we were the only guests. Soon, more came, but the restaurant was never filled. On the way into the main, lower dining area, I paused by the "well", which turned out not to be a well but a sort of deep barbecue cooker. There's a well hoist and a sealeable hatch, as on a submarine. It's used to cook large quantities of meat for large events. I want to know more. 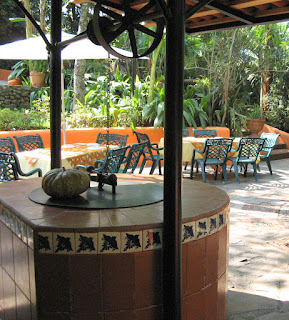 Sra. Chef Blanca and her husband, Don Rodrigo greeted us warmly. We chatted a bit and I gave them a pint of homemade Bread and Butter Pickles. We discussed those briefly. I recommended having them wth BLTs, which I described.
Andrés was our waiter. The menu had not changed since our first visit in May, but we found some nice things to have, other than egg dishes. Georgia hadn't had the Agua Fresca de Zarzamora, so she got a glass.
Doña Cuevas and I also got a half pitcher of Jugo de Mandarina, which was fresh, tart and more than we could finish. She also had chocolate de agua, which was o.k. and I cafe de olla, which here is made very well. Georgia also drank tea, served from a nice teapot.
The basket of warm pan was of high quality. The little, homebaked bolillos were a hit, and the sugar-crisp hojaldres weren't at all bad. The mermelada de naranja was excellent. We didn't try the fresa. Butter was not served.
For our mains, Georgia and Sra. Cuevas both ordered Enchiladas Verdes and I, Enmoladas. Both were done very nicely with a deft and light hand; no cheese and in the case of the Verdes, a light swirl of crema through the brisk, tart-fresh tomatillo sauce, the picante level enough to give a moderate kick. The tortillas were tender and the chicken fresh and delicately shredded. (We have had a wide range of enchiladas verde in different restaurants, and these were in the top ranks.)
My Enmoladas were handsome, neatly folded, and in sufficient but not an excess of mole. The mole was as I prefer it, neither too thick nor runny; picante and not sweet, although I would have liked it more with less salt. Attention to detail was excellent; eg, the sesame seeds of the garnish were toasted to a nut brown, adding a special crunch and savor.
After a leisurely and enjoyable meal, we called for the check, only to be informed by Andrés that Blanca had "invited us" and that the meal was on her. We thanked her, and she said that I had brought her gifts on several occasions, and it was her turn. (Actually, that's not exactly what she said, but covers it pretty well.)
We, of course, were delighted! Now I'll have to think of what to bring next time, but of course, we hardly expect to be comped on each visit.
Naturally, we thought to leave Andrés a nice tip.
I noticed what appears to be a casita/guesthouse/apartment above the restrooms. This would be a very nice place for a B&B, but I'm amazed at how they can already run two large restaurants in the same town, 4 days a week.
In conclusion, El Gorjeo is a charming place for a late breakfast or a brunch, and though the menu selection isn't nearly as extensive as that of La Mesa de Blanca, you can find something to suit your tastes. It's a very relaxing and pleasant place, but it could be even more so if they'd offer alcoholic beverages of the brunch kind; Bloody Marys, sparkling wines, etc.
I'll update my ratings of the restaurant:

We have darker mole over here in Veracruz - but I must say the attention to detail and presentation is very impressive - and a great meal(s) regalo - muy bueno!

I tasted a sample once at Restarante El Bajío, in Mexico City—the original location—whose chef, Sra. Carmen Ramírez Degollado comes from the XIco area, I believe.

If I wasn't hungry before, I sure am now. Excellent descriptions and mouthwatering photos. Thanks for making me salivate. :) Tee Hee
See you.

Looks like all Mexican food, but it does look good.