We returned to San Miguel de Allende for a brief visit in order to pick up our new passports. The whole business took perhaps 15 minutes. Mission accomplished, we turned our attention to a few restaurants, of which at least two had been described in glowing terms by various sources.
The lineup was determined by two restaurants' closed days, which worked out well for us. The three were Mare Nostrum, El Pegaso, and Dila's Restaurant and Gallery. All three had received enthusiastic reviews from various sources. All are worthy, but each had its flaws.


Our first stop was Mare Nostrum a Mediterranean restaurant run by a charming young Sardinian chef, Giulio Alfio Maievi and his wife, Brenda. It's located at Calle Umaran # 56, near the corner of Calle Quebrada, a 5 minute walk to the west of El Jardin. 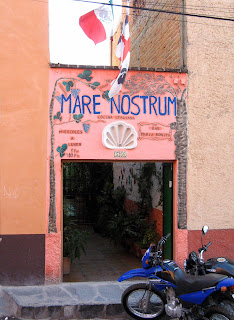 When we arrived, the glass door was latched, but a knock brought the waiter, who explained that it was closed to keep out the wind. We chose a table in the small, warmly decorated dining room. There are a total of 5 tables of varying capacity, with a few more out on the patio bar area.
We were the only guests in the restaurant at about 6:00 p.m.

Our waiter brought us butter and a basket of sesame seeded bread. But while it was poorly made; coarse, porous and crumbly, it did suffice to soak up the luscious juices of our openers.

Doña Cuevas was in the grip of a cold, and seriously wanted a hot soup, but to our surprise, none were offered on the concise menu. We then asked our waiter which dishes were specifically Sardinian, and he called the Chef to explain. The very affable Chef Giulio spent considerable time with us discussing the menu.

Doña Cuevas decided to have an Ensalada Otoño  to begin, of three kinds of mushrooms; white, Portobello and setas, in a light lemon juice and olive oil dressing, and fresh chopped parsley. It was generous in size, and could have served two nicely. I tasted it and while it was refreshing, I think it would benefited from a light saute to better bring out the flavors.


That was precisely what my chosen appetizer did. Setas in White Wine Spanish recipe, very lightly sauteed white shelf mushrooms, with garlic, parsley and white wine.


Doña Cuevas decided to have one of three risotti offered: Risotto Fresco, with peas and mint; which we thought would be as close to soup as possible. We have had little or no experience with risotto.
I chose the Ravioli Olbia, filled with duck and spinach, which originated in the Chef's home city.

The main courses arrived: the risotto looking good, brimful in the bowl, flecked with the light green of peas and the darker mint leaves. (dried.)

The Olbia, made with homemade pasta, were in a slightly pinkish reduced cream sauce, under a mantle of freshly grated Parmesan cheese.


The risotto was pleasant, although the grains of rice really needed more cooking. The peas were reconstituted from dried. Together, these two details evoked an unfortunate suspicion on my part about the source of the risotto. How could it be made so quickly, and for just one person?
I hate myself when I think this way, but there it is.

The Olbia were very tasty, in a rich cream reduction, but I have to say the filling ingredients were not distinguishable. So, while it was a quite agreeable dish, it was not distinctive. The sauce was better than the ravioli.

(Apart from the salads, it would have been nice to have had some fresh vegetables offered.)

With our meal, we drank glases of Montepulciano, at $50 pesos each. My impression was that they were generously poured; my wife's was just the opposite.

Three desserts are offered, but Chef Giulio brought us a complimentary sweet  of profiteroles filled with chocolate pastry cream. I would have liked to try the Reina Pepiada, a chocolate mousse sprinkled with black pepper, but I couldn't refuse the generous gift of the profiteroles.

I also had an espresso, which was made to Ron Granich standards in that there were aout two thimblefuls in the cup. But it didn't taste very good.

To sum up; it was enjoyable but with some small flaws, and Giulio was very attentive and engaging. I think that we didn't experience its full potential. We would try Mare Nostrum again, with particular attention to the pizzas and pastas other than ravioli.

My ratings for this restaurant are therefore tentative.

Next: Restaurante El Pegaso
Posted by Don Cuevas at 5:40 AM

Don Cuevas, I can't wait to read the other two reviews because I think this one is spot on. There are some nice things about Mare Nostrum but.....

Mare Nostrum is a restaurant you want to like. That's why we'd go back and try it again.

Please don´t hate yourself when you think any sort of way. I don´t.

Felipe, thank you for that advice. One should never feel guilty for holding an opinion, even if it's based on an unproven suspicion.

About the black pepper: ever had fresh, ripe strawberries with a drizzle of balsamic vinegar and freshly ground black pepper?
You gotta think outside the box.

You are a tad spoiled amigo, keep in mind the median age and acceptance of quality of the typical SMA resident. A lot of them would rate a place 5 stars because you can eat the main course with a spoon.....

If you have not tried dark chocolate infused with chipotle pepper you have missed one of life's greatest sins. I could make it my number one vice!

I will have to bring some down for you Felipe! You will adore it. Your better half will want it on the nightstand for eternity.

Maria Luz
Here in Texas, where I am always pushing the edge of the envelope.

María Luz,
Don't forget whose blog this is, when you are bringing down that chipotle dark chocolate, eh?

THAT would be a sin, to leave us out and only supply Felipe and Lady Zapata a sample.

Got ya' covered, Mike! Forgive my oversight. It really is devine!