Just a week before our departure to San Miguel, I received an email from a friend, Doug Butler, who with his wife, Kathy, had just returned from SMA. The email described a remarkable meal at Dila's Restaurant and Gallery, located at Ancha de San Antonio # 31, Colonia Centro.

Doug wrote, and I excerpt: "The chef is Sri Lankan, trained in Switzerland, and very talented.  TripAdvisor has rated it the best restaurant in SMA."

They enjoyed it so much, that they returned for a second meal: "Sri Lankan food is a lot like Indian food, with their complex and dense use of spices to enhance the flavor. ... two of our best meals ever, and we can't wait to go back."

I was impressed by Doug and Kathy's enthusiasm (He even wrote his first review on TripAdvisor about it) and so planned a visit to Dila's on Tuesday, our last full day in SMA.


We were operating under some difficult conditions. Señora Cuevas was suffering from a very evil cold, and I was not getting enough sleep. So it was that we took a cab out on the sunny afternoon to — the wrong place. My fault, for not having read Doug's original email closely enough. After considerable walking and a second cab, we found the restaurant before frustration and fatigue won out.

It's decorated in a flamboyant style with vivid colors, murals of gods, goddesses and elephants. The chairs in the dining room were and solid and comfortable . Out in the cobbled patio area, the wrought iron chairs looked less comfortable. 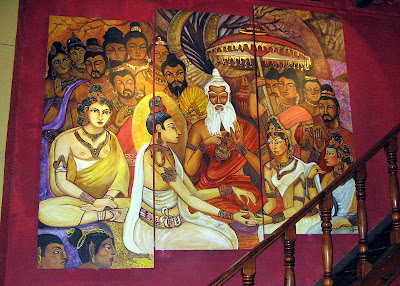 Our previous experiences with Indian restaurants had left me unenthusiastic, but I realized that it was because we'd usually gone to those cheap, all-you-want-to eat buffets.

Our meal did not get off to an impressive start. Our waiter brought us a covered basket. When we lifted the lid, what we saw inside, ungraced by any cloth, were four small rectangles of flat bread. I almost laughed. The bread wasn't bad. The accompanying pot of yogurt was with shreds of carrot and more was good, but a more generous supply of bread would have been welcome. It wasn't until late in our meal that that the waiter asked if we'd like more, but by then we were done and the yogurt was no longer tempting.

Our waiter could not prepare a vodka martini, so I settled for a vodka on the rocks with a bottle of agua mineral to the side. This wasn't a big deal, but it was puzzling, considering that there's a full bar.


I'll get this out of the way here: our waiter was extremely attentive, really to excess. He would come to the table at less than 5 minute intervals to ask us "¿Todo bien?" He even checked to see if my wife's mineral water was "¿Todo bien?" This became distracting, and ultimately, annoying. I was at a loss as how to deal with it. I would hope that if and when we return, it's at a busier time, and he might have more customers to occupy him, or else we get a different waiter.

Doña Cuevas got her wish for soup. The menu offered three, but the one Doug had praised, Sri Lankan Fisherman's Soup, was an excellent, yellow curry based soup, enriched with coconut milk. I had a taste and liked it, even though I'm not usually an aficionado of coconut milk. La Señora reported that it was very rich and moderately picante, although the seafood was not visibly abundant. A half portion might have been sufficient due to its richness.


I ordered a humble looking dish of Sri Lankan Pasta with Yellow Beef Curry. Behind that modest appearance was an interplay of spices and flavors, which Doug described so well as, "complex and dense use of spices to enhance the flavor."


Doña Cuevas enjoyed the soup but needed something lighter and refreshing. After some consideration, she wisely decided to get a Mediterranean Queen Salad. This appeared after a modest wait. It's a composed salad but the only thing Mediterranean about it are the four rolled slices of jamón serrano posted about the corners of a pile of variety lettuces. The Indian-spiced sections of warm eggplant and cucumber glowed with spicy tartness. Chef Dilshan came out to ask how we liked it and explained that he'd "flambeed the eggplant and cucumber with garam masala and white wine.". Very good. Todo bien.


Our cuenta was $375 pesos, plus tip; less than what we'd paid the night before at Mare Nostrum, but consider that at Dila's we'd not really had a full dinner.

We hope to return sometime, in better shape, at a busier hour, and try other tempting dishes.

Again, my ratings are tentative.

Don Cuevas, I don't like Dila's but then I'm not a big fan of Indian food. And it doesn't seem like their service staff has every settled in.

Pegaso's....before we moved here full time we always went there when we were in town. I don't think we have been there in more than 4 years. I thought the food was good. The service was very good and they remembered you when you came in. People rave about their desserts but they just seem the same as we can get in the States.

Love hearing what someone else thinks about the restaurant scene in SMA.

Billlie; we'll do that, after save up enough money. ;-)

I had excellent comments from two other people, but they posted them on Michoacán_Net. I've urged them to post them here, but for various reasons they haven't. However, I will put in three recommended restaurants from one lady.

We have been to none of the following:
The Restaurant
http://therestaurantsanmiguel.com/

I have had excellent food at The Restaurant. The flavors are bright and fresh. We sometimes go and sit in the bar and share two or three appetizers and a glass of wine. They also have a hamburger night on Thursday. The burgers look great and we keep saying we are going to go try them. The Restaurant is a special night out for us because it is a bit pricey.

Cafe Iberico we also like a lot too. It use to be in our neighborhood and that was great. Now they have moved uptown and the prices have gone up a bit. We have friends who have traveled in Spain a lot and they think the things they have eaten there are as good as at any place they have eaten in Spain. It is fun to go with 2 or 3 other couples and keep ordering and sharing dishes.

I have not been to Cafe Rama for dinner but the comidas there are very good and quite reasonable for what you get.

May I also suggest Don Felix. It is a bit out of the way but his chiles en nogada are the best I've ever had and the enchiladas verde rank right up there as well. He also serves steaks and fish but I keep ordering my standbys. He started in a small tent with crystal chandliers and paingings hanging on the wall. At that point he served mostly tacos. They were soooo good. Now you have to order a plate of seven tacos. I liked it when I could order by the ones and twos.

Another restaurant that has been good recently is Planta Baja. We went when it first opened and it was okay but we have been back 2X in the last 6 months and it was very good. Beautiful presentation and the food lived up to the presentation. It is another place that we sometimes go and eat from the bar menu (appetizers). It too is a special night out.

And one more place that is in our neighborhood and a standby for us, Rinconcita. Miguel and Mercedes serve excellent Mexican food that is fresh and not bogged down in cheese. I think I've had about everything on the menu and it was all good. The prices are reasonable and they will make you feel welcome. They don't have a web page but they are located at Calle Refugio Norte #7, in Colonia San Antonio.

Mabe we should meet the next time we visit SMA.

I'd love to connect the next time you are in SMA. In my earlier comment I started to write that if you went to Rinconcita you would definitely have to call me because it is literally up the street. Yes, we should meet. Just give me a heads up.

Billie; we'll definitely try to do that on our next visit.

I find it very odd that they could not make a vodka martini. It simply requires substituting vodka for gin.

Just discovered your blog and have been enjoying reading the articles all morning. We have a house in Patzcuaro and are traveling to SMA on Saturday for vacation...we're going to try Dila'a on Tuesday - looking forward to the food and music.

We just put a link to your site on our Patzcuaro Places page...