(This could have been titled, "Three Little Piggies".)

We recently went to Morelia to shop and dine, riding with our friend, Ron.
I'd read a review on MoreliaConnect by Wayne Brewster owner of the shop, Aquí y Allá, recommending a new restaurant, featuring both Lebanese and  Yucatecan specialities, as well as carnes a la parilla. (Grilled meats.)


Before commencing our arduous shopping tasks, we fortified ourselves with some succulent and tender birria de cordero tacos and sabroso but salty consomé in the converted garage of La Esquina del Borreguito, at the corner of Antonio Moral #267 and Aristeo Mercado, Colonia Nueva Chapultepec. (It's also within range of the INM office, and makes a good, restorative stop after a visit to that service.) The birria effectively muted the edge of our appetites for dining later, but we made a good effort.

After shopping, we returned to dining. We had no trouble finding El Asador La Hacienda at Morelos Sur # 1500, Colonia Félix Ireta. There was easily accessed off street parking. The new restaurant building is atypical next to its worn (but non threatening) neighboring buildings. 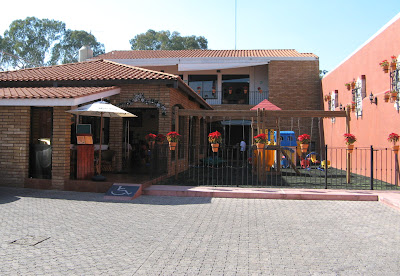 The restaurant is attractive, although relatively sparsely decorated, which I didn't mind. The dining area consists of two spacious rooms, with the one to the back about half the size. There's a small playground where your kids can entertain themselves. I saw a young, uniformed woman nanny supervising them. I assumed that she worked for the restaurant. 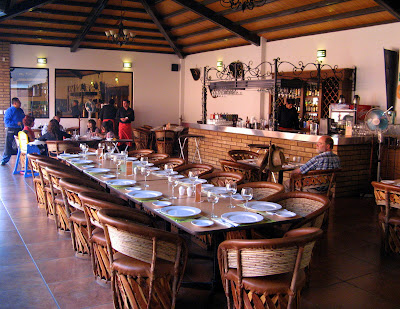 The soft-spoken head waiter welcomed us, brought us a small plate of lightly seasoned raw vegetables and not very good bread, then asked if we wanted menus. That puzzled me somewhat. Why else would we be there? We had the attention of that waiter and two newbie assistants throughout our meal. It would have been too much attention, but at least they didn't pester us with "¿Todo bien?" every few minutes.

There was a loud noise from the kitchen ventilating fan, and we considered moving to the back room, but the head waiter had the kitchen turn off the fan.

The menu is quite extensive but we were not up to trying very many dishes due to our earlier indulgence. The attractions for our group were the Combos Yucateco and Libanés, both offering a sampling of specialties not often seen in the area.

Ron ordered the Combo Libanés, which is comprised of stuffed grape leaves, hummous, tabouleh, a kofteh (it may have been baked kibbeh.), jocoque, cucumber salad, rice with lentils and triangles of pita bread.
But ever curious, he also ordered three panuchos de cochinita pibil, to share with us.

A panucho is a variant of a sope or gordita, a small cake of masa cooked
on a comal, then partially split open and filled with black beans. They are then topped with shredded meats or chicken. Cochinita pibil, marinated pork, wrapped in banana leaves and slowly cooked in a pit, is then served as a plate or on panuchos, or as you like. The garnish of purple onions marinated in lime juice is classic. A very small dish held some potent salsa de chile habanero, with a thick, jam like consistency. Believe me; it wasn't jam! We all liked the cochinita.

Let's go around the platter, clockwise, and describe what those items were. In the upper left, a refreshing salad of cubed cucumber in a yogurt sauce; the three grape leaves stuffed with a seasoned rice; the bulgur wheat mixed with tomatoes and parsley is tabouleh; in the lower right, a surprisingly good mixture of rice and lentils; moving left, the kibbe, a sort of baked meatball also made with bulgur; the obvious triangles of pita bread; and in the lower left corner is the hummous (seasoned garbanzo puree with sesame paste and seasonings.) The white blob in the middle of the platter is jocoque, a sort of very thick yogurt. It's all quite healthy as well as delicious.

Doña Cuevas and I spilt a Combo Yucateco platter, which reprised more panuchos and cochinita. Good thing that we liked them.
Again, circumnavigating the platter, from upper left: a leaf of lettuce; two panuchos de cochinita; two tacos de cochinita, marinated purple onion; a tamal Yucateco, the last my least favorite. Not bad, but undistinguished. The tomato sauce on it packed a wallop, too.
It's apparent that the Combo Libanés offers more variety and interest than the Yucateco, and at a lower price.

But wait! There's more: we were offered the option of also having Part 2 of the Combo: Relleno Negro de Pavo, a very distinctive dish of the Yucatan. Naturally, we accepted. Here it is.

This was one of the most exotic dishes we'd ever tasted in Mexico. There was a meatball that tasted something like turkey mixed with turkey dressing. The generous amount of sauce in which it resided had an elusive flavor. Apparently it's derived from nearly burning chiles and tortillas as principal ingredients. We thought it was...ah...interesting. Really, it was good in a very different way and I recommend it to those of you with adventurous palates.

Two out of three of us would like to return to try other dishes (but, please; no more cochinita pibil for a while!) Due to the circumstances prior to our visit, I would give the restaurant a tentative rating, as follows:

My lovely wife and I went there a couple of weeks ago. Really liked it. Plan to return.

You mention the "new" building. While it's new compared to its neighbors, the place has been open a couple of years.

Thanks for the comment, Felipe. I'm surprised that it's been open for two years.

I first read of it late last year, when Ms Rose of Morelia posted a question about it on MoreliaConnect.

The way they make panuchos here isn't as healthy as you discrib. First you fry a corn tortilla (they make special ones for panuchos and salbutes) so it puffs up, you split it open and stuff it with refried black beans. Then you serve what ever on top, pavo is typical, with some pickled red onions, a slice of avocado and sometimes tomato. Salbutes are the same except you don't stuff them, they are like the Yucatecan version of what I know as a tostada except the tortilla is puffy instead of crisp.
Lebanese food is plentiful and good in Yucatan, you can buy kibbes in the street from ambulantes most mornings.

Theresa; thanks for filling in some details about the Yucatecan cuisine. It's an area of which I know so little. Haven't been there yet. Must visit someday. Ojalá.

I've been there about six times since I discovered the place last November. The hojas de parra are just OK, but I didn't think the rest of the Lebanese food was as good as the Yucateco. The tamal and panuchos were my favorites.

They haven't had baklava since my first visit, but it was excellent at that time.

The owner is from Merida. Or at least that's what the waitstaff told me.

Thanks, Jennifer.
We'd go back and try the grilled meats.