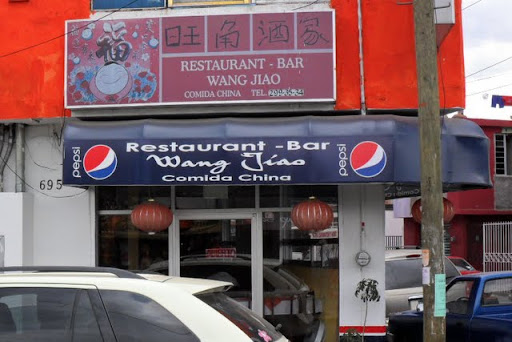 Not long ago, our amigo in Morelia, Peter Terry told us of a better-than-average Chinese restaurant, Wang Jiao Comida China, at  Avenida Universidad # 695, corner of Jesús Romero Flores in Morelia. Peter had heard of it from world traveler, Michael LeBroy. Last Thursday, we went to Elaine's Garage Sale (not to be confused with Elaine's in Manhattan) and because the Wang Jiao Comida China is only a few blocks away, we went to dinner there.
We were very happy with our meal at Wang Jiao, keeping in mind that we had no illusions that we were in San Francisco or New York's Chinatown.

We had the Número 2 Menú, for 4 persons, at $82 pesos per person.
Our meal began with bowls of Sopa de Tallarines. The broth was uninteresting, although Doña Cuevas said she liked the linguine like wheat noodles. 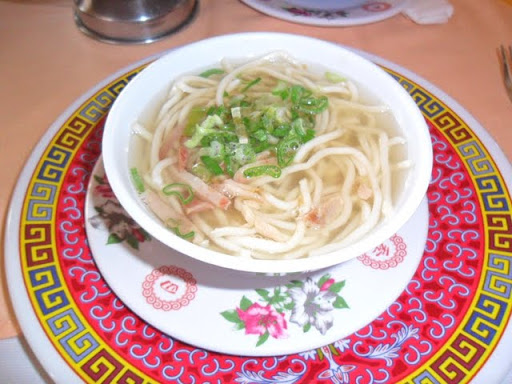 We augmented the generous platter of entremeses with a plato grande de camarones enrebozados (batter fried shrimp.) on the basis of their appearance at a neighboring table, and while they were attractively fried in bow-legged hoops, the shrimp themselves weren't too flavorsome. But we managed to eat them anyway.
Peter had mentioned that the ribs tend to be more like jerky in texture, but we lucked out this time, and the meaty rib chunks were juicy enough and seasoned with salt and maybe pepper. These are not the aromatic, sweet and gooey barbecued style Chinese ribs, but a simpler version.
The Spring/Egg Rolls were pretty good, and had the recognizable scent of 5-Spice Powder in the filling. Not bad, but in my opinion not appropriate for Spring Rolls. Hot mustard (Mostaza fuerte) was served on request, in very small quantity. It was thin, and not all that hot, but by golly, it was hot mustard. For more punch to the palate, there was a small sauce dish of a variety of the dark, oily Salsa Macha popular in Michoacán.
The style of serving seems to be to restrain the picante in the kitchen but instead let the customers apply the heat al gusto. Overall, the food tends to be underseasoned.
The table dish of Salsa Agridulce was very standard stuff, serving as an innocuous condiment for the fried items (of which there were many), but combined with the hot mustard or salsa macha, it was tolerable.
The huge mound of very hot Arroz Frito was among the best we've ever had. It had a slight smokey taste, as if whomever was wokking in the kitchen knew what they were doing. It had bits of fried pork in it. I actually helped myself to seconds or thirds of the rice, and I'm not a big fried rice fan.
Of the other dishes, the Chop Suey Mixto was our favorite, as the bean sprouts were very fresh and crisp even after being stir fried. There were small pieces of chicken, possibly pork and a few small shrimps in the Chop Suey. The vegetables in the Pollo Kung Pao were very attractive, but I found the taste of the chicken legs very strong. I didn't recognize it as Kung Pao Chicken as any chile heat was totally absent, as were the obligatory peanuts.

The Pollo Almendrado was good, with surprisingly generous pile of whole, toasted blanced almonds on top. There were even bits of cloud ears fungus in the dish.
It was an incredible amount of good food for the 4 of us, just under $500 pesos, but there was plenty of leftovers to carry home. We would eat there again if we were in the neighborhood and had a yen for non-traditional comida China. I'd also consider ordering only what I preferred from the a la carte menu.
Ratings
• Food: ***
• Service ****
• Price: $-$1/2 (One $= $100 -pesos per person)
• Ambience: family with a touch of China.
• Restrooms: clean and serviceable
Special thanks to Peter Terry for providing the photos.
Posted by Don Cuevas at 5:02 AM

Looks like every other meal in a Chinese restaurant anywhere. I always remain surprised at how they do that. Maybe there's a secret network.

Felipe, yes, there are tunnels everywhere.

I know; you want a great Vietnamese restaurant. Buena suerte.

Well at least the plates look like they were from a Chinese supply store...
I will have to give it a try, next time we are in Morelia during dinner time.

In the large town of Melaque we have two Japanese restaurants and nothing more oriental. Two because one is open 11am-5pm. The other is open noon-9pm

I am a fan of fried rice ... especially shrimp fried rice. Yokosuka Japan in the early '60's our favorite bar would cook up a huge plate of fried rice with two fried eggs over the top ... to sober us up for the trip back to the ship. Not like yesterday but I can cook up a pretty good plate myself.

Tancho; it was a good thing the plates looked Chinese. There were no chopsticks, which is fine by me. Chopsticks slow down the eating. It's a wonder that China grew to the size it is today.