I went yesterday  morning into Pátzcuaro centro by combi van. When I alighted at la Plaza Chica, I saw this compact cart with pozole for sale.


The pozole was boiling hot in its large pot; a good sign. 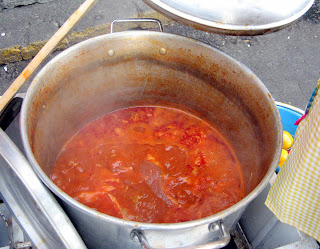 I was already in the mood for menudo or birria, but my favorite menudo place is 6 or more blocks away, and we'd had birria on Thursday. I usually think of pozole as evening food, but in Pátzcuaro, they eat it in the morning as well. Could it be the cooler, upland climate?

I asked the price of the pozole, and the friendly Sra. Margarita told me "$12 pesos". At that price, I couldn't pass it up. I ordered a bowl, and Margarita's daughter daintily garnished my pozole with only what I wanted. If you like, you can add more yourself.

Here's what I got for my money (Just over $1 USD.) I had my choice of fatty or lean meat. The maíz was the red, criollo (non-transgenic) corn, with more resistance to the bite. I was grateful that it wasn't the cloudy, starchy "pozole batido) type. The large grains of corn were intact. There was a strong tomato component in the broth. In itself, it was barely picante.

It not only tasted good, but was attractive as well. Really, it was the most beautiful bowl of pozole I'd ever seen. I could have also had shredded cabbage or lettuce on it, but I decided not to push my luck. Here's a serving for another customer, unfortunately slightly blurry.

I was offered a free refill on the caldo, or broth, which I accepted.

How can such good stuff be sold so cheaply? Could be that the overhead is very low. You can stand and eat there, from a china bowl with a metal spoon, or take it to go in a polyfoam container. There's nothing else sold. If you want something to drink, you can get it elsewhere nearby.

Margarita's  Floating Pozole Stand changes location, depending on the day and other circumstances. But it's to be found Tuesdays, Fridays and Sundays, somewhere in or around the west side of the Plaza Chica in Pátzcuaro. Or possibly around the corner by Oxxo, on Calle Ramos.

Now, it's possible that you or I have had better pozole elsewhere, but this one scores pretty high on the charts.

Ratings (if that is possible)
• Food: ****
• Service: *****
• Ambience: from zero to five, depending on your    perspective.
• Hygiene: I would stay away from the lettuce and cabbage, just to be sure. The money/food handling interface is somewhat lax, but I survived unscathed.

Now that's a pretty bowl of pozole. I prefer green, but red is fine. I would not have fretted over the lettuce and/or cabbage. I think people fret too much.

I've never seen this business before.

Felipe, it was new to me also.

Sounds like you had a delicioso meal. Looks good. Have a great week.

Your photo has jarred my taste for a bowl of posole, now I have a quest to find the venture. I wonder what their hours of operation are?

Oh my, it is so funny you wrote a post about posole as I have been craving it for over a week now. Yesterday I was so close to calling up our usual posole lady that delivers it directly to your house. My family in Zacatecas uses the red corn as well and I absolutely love it but in Nayarit(where my husband is from) they usually use the white corn. I can't believe you only paid 12 pesos I woudln't have passed it up either!

Now that I have seen your delicious bowl of posole I absolutely must satisfy my craving soon.


We are very fond of Zacatecas and have visited it twice, but it's been 9 years since the last time.

We have a niece named Trinidad. "Trinity" in English. I'll bet that she has never tasted pozole.

Some days it is better to be a vegetarian than others - when it comes to stomach linings - I do not send any down to mine ;-)

yum! In the small village near where I live, a family makes posole every Sunday night. My partner and I often go and order 3-4 servings to go - for 40 pesos. The servings are so large they last us for well over 4 meals. It must be the low cost of ingredients... and perhaps a lot of the folks near here grow their own limes, chiles, and corn... and some even tend their own flock of hens.

We make it veggie style for big groups, using the guajillo chile as a base flavor, and adding buttom mushrooms to give it a little meat. Crowd pleaser for sure.

I was about to make myself a grilled cheese sandwich with contraband Tillamook extra sharp white cheese. But it can wait. I am headed into the village for a bowl of pozole -- at my favorite stand.

We, nor our friends, have ever seen Sra. Margarita's Floating Pozole Stand again. It's a mystery.