A Cocina Económica is an inexpensive place to eat, usually with a three to four course comida. There are often some choices offered in the courses. Author David Lida recently wrote a good description of the comida corrida offered by cocinas económicas.

We first learned of the Cocina Económica "Mary" from a Lonely Planet Guidebook. Since then, we've eaten there three times and nowhere else in Uruapan.
What distinguishes Mary's from the pack is that there's a greater choice of well prepared, homestyle cooking, served quickly, in a large and attractive dining room. 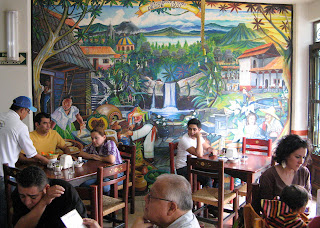 No, none of the dishes offered are cutting edge cuisine. It's homestyle fare all the way. We were there recently with our vegetarian in-laws, and all of us were reasonably pleased with our meal. We started with some guacamole and totopos — tortilla chips— ($15 extra), although our mildly palated visitors found it too picante with serrano chiles. Yes; it was a bit excessively picante for me as well.

For the main part of the meal, B-i-l started with espaguettis (resembling those of the Franco-Amercan variety); Torta de Coliflor and somehow, both frijoles, salad and nopalitos con huevo, when he thought he'd ordered only the nopalitos.

S-i-l had Crema de Brocolí to start, then a Torta de Coliflor in the ubiquitous Caldillo de Tomate. She enjoyed the coliflor, fried in an egg batter, similar to that of chiles rellenos.


Both Doña Cuevas and I had a Sopa de Milpa for starters, a sort of green vegetable soup. I wasn't fond of the somewhat acidic taste. I don't know from where that came—verdolagas? (purslane). She finished mine.
Doña Cuevas went for the Albóndigas en Caldillo de Tomate (meatballs in tomato broth), and pronounced them very good. She could have had spicy Albóndigas al Chipotle instead, but chose the milder version.

For a main course I had the very homey Espinazo con Morisqueta (pork backbone in caldillo with white rice) and while it was fine, altough I probably wouldn't order it again. The restaurant must have had a surplus of caldillo de tomate on hand, as several of our dishes featured it. It's a fairly thin tomato broth that serves more as a backdrop than a starring role.

The service was friendly and swift. I will now reveal the secret of the fast service: a row steam tables behind the line. Yet the food seems as fresh as if it were cooked to order.

With our meal came a pitcher of agua fresca and a basket of hot tortillas. Desserts are extra, but inexpensive, from a short and simple list (few of which appealed to me) among which were flan, duraznos en almibar (peaches in syrup), chongos. (Rennet curds in syrup. Yuch) Our amigo Mexico Bob explained chongos and how to make them, here, back in 2008.

How much for all this? You'd expect to pay more, but currently, it's $44 pesos. You want mole, you pay a small surcharge.

Here's some location and hours info copied from the Lonely Planet Guide to Mexico: Note the price has since risen $9 pesos.

I am thrilled to discover that embedded Google Street Views are again possible. See below. If you explore and play around with the maps, you'll find some amazing features. (Though the address floating on the Street View Map is incorrect.)

For your convenience, here's a straightforward street map.

LIVE MUSIC ADVISORY: A young singer-guitar player came in during the time we were there and entertained us. We thought he was very good, so much so that my in-laws bought a 7 track CD from him for $50 pesos.
Posted by Don Cuevas at 6:41 AM

Just three blocks north of the intersection of the two main drags (colored yellow) Juarez and Villa, you will find Ave. Las Americas. That's where you will find some of Uruapan's excellent seafood joints. On the left side as you drive away from Villa. FYI.

Gracias, Felipe. I was hoping that you'd give me more info on the seafood places.

Thanks Felipe, we are always looking for decent seafood, and thanks Sr Cuevas for a new Cocina Economica to check out!

Sounds very nice Don Cuevas. Looks great as well. I seen the albondigas and decided to make some for dinner with fresh tortillas. Thank you for inspiring me. Have a wonderful day and upcoming weekend.