Thursday, January 3, we drove an hour and a half down the mountain slopes on the toll highway from Pátzcuaro to turn off at Kuar Tukuri, in la Tierra Caliente. 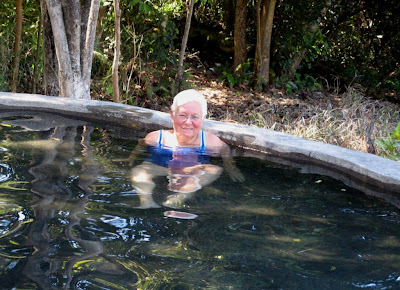 After a few hours of toasting and dunking in the hot, warm and cool pools, we dressed and drove to La Mesa de Blanca, about 25 minutes north, up the toll road at Ziracuaretiro.

Once past a temporary impediment of a stalled truck on the RR tracks, just before reaching the restaurant, we were warmly and enthusiastically greeted by Chef Blanca and her husband, Don Rodrigo. We went to El Refugio dining room, our favorite of several, where we were attended by our regular, older, experienced waiter. 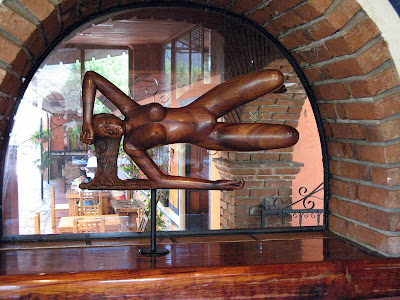 This carving, at the few stairs up to El Refugio, is not listed on the menu.

We broke with our tradition and ordered a cerveza for Sra. Cuevas and a michelada made with the house sangrita for me. (Usually, I have a mezcal accompanied by sangrita, followed by a shared pitcher of agua de zarzamora- blackberry ade). 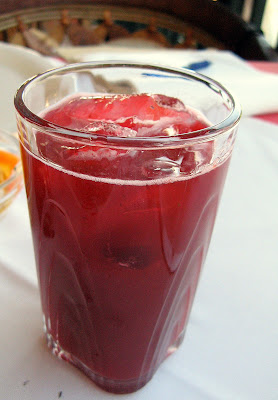 For an appetizer, we had the Choriqueso, melted mild white cheese with crumbled, zesty chorizo. It's rich and delicious and enough for at least three. The accompanying tortillas on this occasion were a little disappointing. They were not the thicker, coarser grained handmade ones to which we are accustomed, but light, like flour tortillas and nearly flavorless. That didn't stop us from gobbling up the choriqueso on the tortillas.

I'm amazed that I don't seem to have any photos of the better, handmade tortillas, but here's one I found of tacos de carnitas on said tortillas. 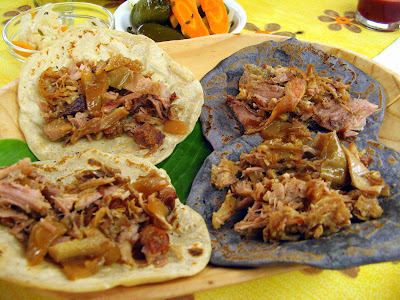 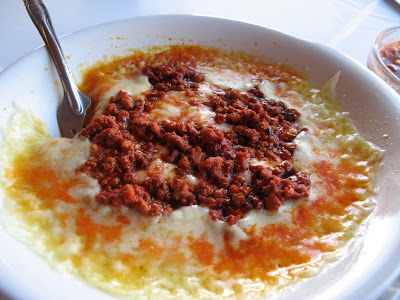 Señora Cuevas ordered Trucha a la Talla, and I, Camarones a la Diabla. 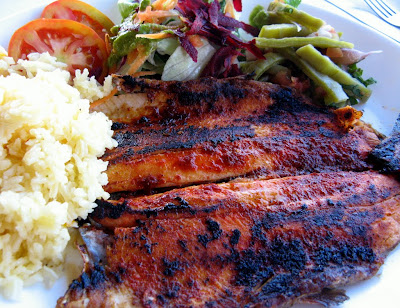 Our senior waiter asked me if I liked my camarones picante. I told him "mediano, no tanto." (Medium, not so much. But someone, perhaps in the kitchen, wasn't paying attention.)

When the dish arrived it wasn't very impressive. The plate held 8 medium, rather overcooked, yet mysteriously palatable shrimp. The sauce was interesting, to say the least, and unlike any diabla sauce that I've had elsewhere. It seemed to have an orange-apricot base and no ketchup, but it was tongue searingly picante. I don't recall how long it's been since I'd eaten anything that spicy. The very good rice alongside and the bland tortillas helped to mitigate the pain of the capsaicin. The Camarones a la Diabla should carry a warning label. 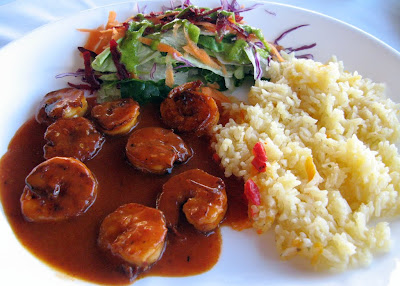 The trucha was good, but too much to finish after choriqueso and tortillas, so we had it boxed to go.

We had a couple of aguas minerales and I had a café de olla to finish.
La cuenta was $475 pesos. $38 USD.
On our next visit, we'll do less experimenting and return to our favorite dishes. Our favorites at La Mesa de Blanca are Chiles Capones, an appetizer of long slender chiles pasillas filled with queso fresco and bathed in a mild green salsa de tomatillos, enriched with lashings of crema. 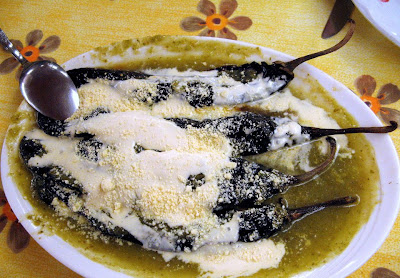 (La Mesa de Blanca is now correctly marked on the Google Map. It took months of efforts to get Google to correct the highly erroneous location.)

Directions from Morelia: Click here. I have adjusted the often bizarre Google Maps driving directions to optimize them.
WARNING: Thse Google directions are still not to be relied on. From Pátzcuaro, we like to take the libre highway to the Zirahúen entrance to the cuota, and go from there to the Ziracuaretiro-Zurumcapio exit.

Service: **** (Waiter was working the entire dining room by himself, so service was somewhat slower than normal, but this presented no problem.)

Hours: Thursday, Friday, Saturday and Sunday. 13:00 to 18:00 hours. We prefer coming on a weekend day, as there are more specialties available and the food is generally a notch or two better.
Posted by Don Cuevas at 9:45 PM

Our last visit there a few weeks ago, was kind of a disappointment. I had the rabbit and the wife had the lengua. I should have ordered the tongue (which I normally do) because the rabbit was tough, and the sauce under-seasoned. Not sure what is going on there, but our last two times there we have been underwhelmed.

We seem to get a better meal and experience at Los Arcos down the road, although La Mesa has a great tranquil mood calming view, that we enjoy. For some reason they didn't have the zarzamora punch available the last time, so I had to make do with a cold Modelo.....