We have been dining at Parrilla y Canilla since July, 2012. Over the years, it has been very good. Parrilla y Canilla is arguably the best restaurant in Morelia, and continues so in our estimation despite an occasional, minor slip up. The cuisine is Uruguayan/Argentine/Italian. The restaurant's style is casually elegant.

Yesterday, after conducting some Heavy Shopping not far away, we joined our friend Jennifer for another meal at La Parrilla. Apart from restoring our red blood cells and relaxing after the sometimes arduous shopping, we were able to relax with a glass of wine and, for me, a very generously poured and potent Gin and Tonic.

The restaurant was surprisingly very busy for a Tuesday afternoon, but there were still a couple of umbrella shaded tables on the attractive terraza, with a view of the city below.

Our friend, Ms. Redshoes, had a glass of red wine, but I wanted something stronger: a Bombay Gin and Tonic. It was very gratifying. It was without a doubt the strongest, most generous drink I'd ever had in a restaurant.

We were brought a basket of house made breads. It was apparent that the quality of baking had greatly improved since our earliest visits three years ago. There were the usual little dishes of well made chimichurrí and salsa roja. 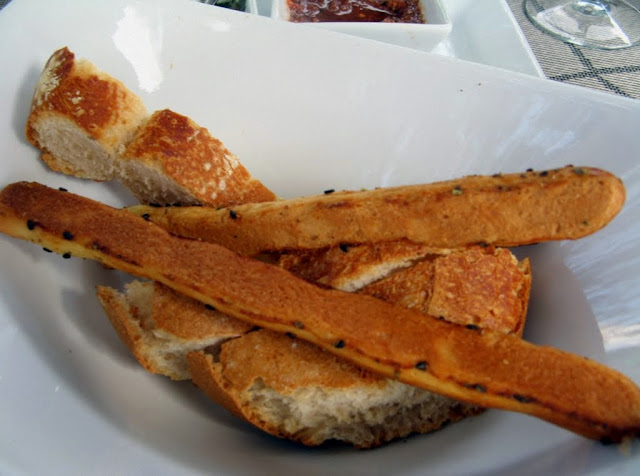 All three of us ordered appetizers. Sra. Cuevas and our amiga both got an Empanada de Carne. I saw a new dish on the menu, Lengua Nico Pérez.

The empanadas were attractively browned and well filled. Accompanied by a salad, they could serve as a modest lunch.

The tongue was presented as a sort of warm salad, in a delicious, light vinaigrette with minced parsley and egg. There were three moderately thick, tender slices, which together could have sufficed for my lunch. But I'd already ordered my second course.

Which was ...
Bife Rosso: A 400 gram Bife de Chorizo, on a bed of buttered linguini, generously topped with chunky sauteed mushrooms, with a wine reduction sauce on the side. Not a dish for light appetites, but I was able to make good progress on it. I took home a substantial piece. The linguini, simply dressed with butter, was notably good. I requested  a small dish of Queso Parmesano.

(The wine reduction was delicious, but murky. The kitchen should dedicate its efforts in clarifying sauces and Jugo de Carne. (The latter, a cloudy and wretched dish which I foolishly ordered on two previous occasions.)

Both Ms Shoes and Sra. Cuevas had their favorite cut, Vacio. It came with the Parrilla's signature Lechuga Orejona a la Parrilla.

Our waiter recited a tempting list of desserts to us, but as we were already sated, so finished with coffee. I had an Espresso Doble. It was superior to most we've had in restaurants in Mexico.

The complimentary (purchased elsewhere) cookies were cute, but we skipped them. We were accustomed to homemade little polvorones. 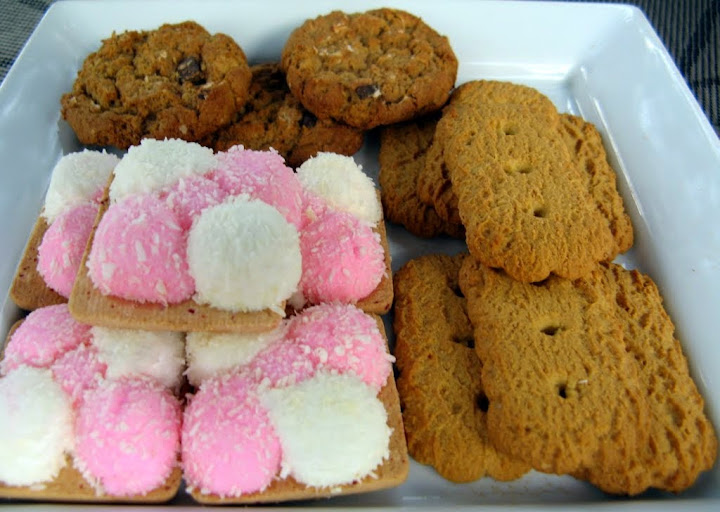 The final tally was around $400 pesos per person, plus tip.

I know people who would go to Parrilla y Canilla just for the tongue, but I'm not one of them. I'll stay with my vacio and lechuga orejona de leña. Oh, all right, I have ventured over to the cuadril (top sirloin), and once a year, fettucine boscaiola.

MsRedshoes should get a ticket punched for all the compadres she has channeled into that place.
We had dined there about a dozen time and the only disappointing meal was their pizza. They do know how to cook meat, and their wine list is stellar.

On our first visit, we tried a Pizza Margherita. It wasn't really *bad*, it was just uninteresting. Thick, floppy crust, too much cheee, dull tomato slices.

The only actually BAD dish I've twice had there was the Jugo de Carne. Time before last, it arrived at the table *cold*! I immediately sent it back, and then it was hot. But it was all murky and cloudy with fat globules and coagulated blood. I really couldn't eat it.

The cookies are not the norm. For a while, P&C had homemade alfajores, which were divino. Then a time or two, a tiny thumbnail-sized beso accompanied coffee. Because I like just a little something sweet with my coffee, I pleaded for a single cookie, knowing that it would be store-bought, and I was surprised by the large plate the waiter brought.

There are some things a person should not eat. Tongue, from any sort of beast, is one of those things.

In other words, Felipe, you are saying that I should keep my tongue to myself?

I'm kind of fond of bottom round.

Tanqueray is very good. So is Boodles.

Tongue? I would order a double portion and call it heaven.

As always a terrific report - then you add Jennifer. She very near the top of my list of wanna-meets. Great photos too.

But would you would order a double portion and call it both cheeks?

Well, he eats tongue with a fork. Will that do? On my next trip over your way, we will have to have dinner there.

Seize the day, we say.

Again, thank you! We have been so busy moving and setting up our new home, for the last year and a half, we have yet to visit this Santa Maria icon. Wayne Brewster has recommended it also. Looks lovely!
maria luz

Good to hear from you, María Luz.

Clearly, this stinky weather here has it's advantages! Having the time to sift through my favorite blogs is a simple luxury considering all the trips we have been making up north and back. And, with a new puppy now aged 14 months in the house, and with another soon hitting age 15, there is always something going on here. Rough and tumble meets old and stodgy!


Good to visit again. Hope you and Susie are doing well!
ml