What we ate in Guadalajara: Allium

Allium restaurant is part of the New Wave of locavore, farm-to-table restaurants that are opening in Mexico. Our meal there was among the best we had during our brief stay in Guadalajara. (Señora Cuevas rates the Pozole Blanco at La Chata as the best thing she ate. I liked that, too, but my best dish was the Crab Cakes at Allium.)

The menu is limited, which in my opinion is good.

The two small dining rooms, a small inner one abutting the open kitchen, and a a larger, semi open air terrace, are decorated in spare, Minimalist style. At Allium, the focus is on the beautiful and delicious food.

The food is exquisitely and creatively crafted. There are some brilliant combinations, and as you would expect, some worked better than others. But nothing we ate was bad.

We were brought an amuse bouche of Sopa Fría de Melón, which had a mysterious herbal component. (Hoja santa?) 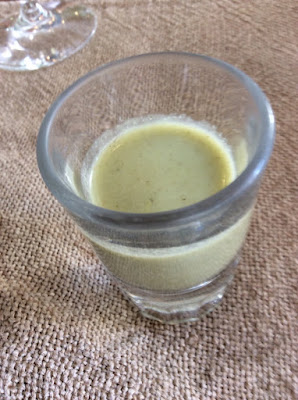 The house-baked bread was very good, although the black bean spread, in a pool of sesame oil, lacked pizzaz.

The Crab Cakes, a hot appetizer which could in itself make a light meal, were among the best I'd had anywhere. The cold Robalo curado en sal was wonderful.

Breast of duck, ordered medium well, was a bit smoky and chewy. Not my favorite dish of those we had, but acceptable. La Señora had la Pesca del Día, in the Elote Dulce preparation. It was good. The layered sauces tend to be on the gooey side in texture. That might not appeal to all tastes.


My dessert, Flan de Elote Tatemado, was pretty but not especially outstanding. The elaborate presentation raised expectations unduly high, but the conclusion was that it was merely pleasant.

Service was casual but attentive. We liked Allium very much. We applaud the three chef owners for their often daring culinary creations. If we are ever again in Guadalajara, we would return there.

We also drank most of a bottle of a dry white wine, Villa Grand Cap Colombard-Sauvignon Blanc 2014. Reasonable priced at $450 pesos the bottle, or less so at $90 the copa.

Note that the terrace dining room has windows open to the street. Street vendors made perfunctory attempts to sell to the restaurant guests through the windows. Towards the end of our meal, a sudden wind and rainstorm broke out, and there was a lot of wind gust and some debris blowing about in that dining room. Karla, our waitress, found us a table inside and out of the wind.