Yesterday, we had lunch in Morelia at Restaurante Caracuaro's newest branch, on Blvd Juan Pablo, the highway to Altozano. (There are 3 Restaurantes Caracuaros in Morelia that I know of. We have been to the matriz, on the western periférico, near Pepsi bottlers, and across from tránsito, at least 3 times previously.)

Food is of a hearty, well seasoned peasant sort of cooking, in the style of La Tierra Caliente. La Señora had a hearty Caldo de Res, (photo from an earlier visit) which was too big to finish, and I ate Carne de Cerdo en Chile. It was a dish of cut pork backbone in a medium spicy sauce made from chiles guajillos, accompanied by decent frijoles and rice. The tortillas were good, and we were given free snacks such as totopos and requesón (like ricotta) and three salsas. The intriguing yellow salsa, complete with fruit stones, was dismally disappointing; the not very fresh, roasted tomato salsa had seen much better days, but the salsa verde was more than acceptable. 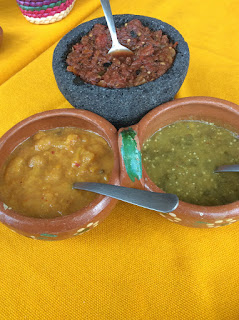 I started with a good bowl of Sopa Tarasca, made the way I prefer, with a bean puree. It was tasty and satisfying. 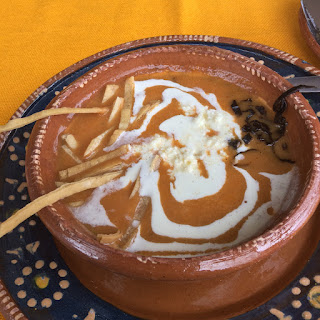 They also offer cortes de res, such as carne asada and arrachera. 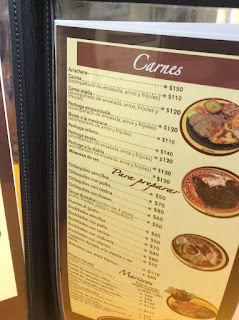 We drank three café de ollas and a bottle of agua mineral. The check came to $270 pesos, or about USD $15.

It's a nice place and quite good, apart from two inferior salsas. Service was attentive but not overbearing. The dining room was empty of customers when we arrived, at about 1:00 p.m. As we were finishing, two customers arrived.

RATINGS
Food: 6
Service 7
Ambience: Way down south in Michoacán. The dining room is spacious and attractive; some of the wooden chairs are cushioned, some are not.
Rest rooms: very nice
Parking in front!


Blog photos unempowered by Google Photos
Posted by Don Cuevas at 4:34 AM