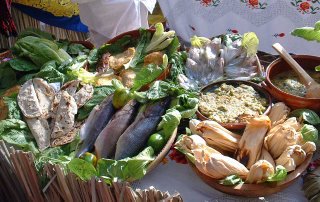 I have some catching up to do, because I have been sick with bronchitis for two weeks. I'm just feeling better now.
The big event here was the Segundo Encuentro de Las Cocineras Tradicionales de Michoacán, (I love those long Spanish titles), which took place over the weekend of December 2 to December 4th. See photos here: http://www.pbase.com/panos/cocineras_michoacanas

We attended the Saturday sessions, held in the Antiguo Colegio Jesuita of Pátzcuaro.

Here is a copy and paste of a post I made to the Mexico Branch of the Lonelyplanet.com Thorn Tree. Today, we attended the 2º Encuentro of Las cocineras Tradicionales de Michoacán. It was held in the Antiguo Colegio Jesuita, in Pátzcuaro. In neighboring Tzurumútaro, there was an exhibition and sale of traditional breads, tamales and atoles. We plan to visit that tomorrow.
The main events, divide among 3 salas, were a fascinating living exhibition of traditional, often pre-Hispanic foods, prepared principally by women cooks, all dressed in colorful regional traje.
We started off in the first sala, dedicated to foods of La Tierra Caliente. There were approximately 7 different pueblos or communities reperesented. The one from Maruata was serving langostas, haf a small lobster, but that didn't seem so interesting to us. We went to the Huetamo booth, where we had a half portion comida of of chicken in a pumpkin seed sauce, (very mild), rice, and some frankly unappetizing beans, served whole and at ambient temperature.
From the same booth, I got a much livelier pork backbone (?) in a thick, coarse red chile sauce, same rice, same beans.

After a pause for refreshment at the Cebadina stand down the hall. (I had been thinking that it was Coke™ that people were drinking, but it was Cebadina.
Quote
BEBIDAS.- La bebida tradicional es la Cebadina, agua fresca de cebada a la cual se le agrega bicarbonato de sodio al momento de consumirla.

Meanwhile, Mrs Anon (Susan) was arranging an order at the Tlalpujahua booth, of 3 sopes made with masa azul (in fact, almost a dark green). We had our choice of toppings: (whole frijoles—much better ones— first on, then variations followed: mushrooms, onions and nopalitos, chicken in salsa verde, and carne de puerco con nopalitos for the other. There was a rough ground salsa verde, but it wasn't really necessary, as the toppings carried sufficient picante punch. These were excellent.
So far, our food had cost us $80 MXP of the tickets we'd purchased at the door.

That was a happening scene, There were probably 10 to 12 different booths, very hard to assimilate the scene due to the crowds, the "buzz", and the increasingly smoke filled air from the wood and charcoal fires. Yet, it was intensely vibrant and beautiful. About the best I could do was take as many pictures as possible, ask qestions from the cooks and helpers about some of the more unusual, often pre-Hispanic dishes. I did eat one taco, served on a large leaf, filled with a paste made from the finely ground seeds of the guajillo chile and another that I forget. The taste was sort of strangely herbal, with a slow burn that was not overwhelming. These were bicolor tortillas, a sort of "yin-yang" symbole created inadvertently with two different masas. Overall, there was just too much to taste and describe.
The third and final patio/sala, complete with central tree, had perhaps 5 booths. One of the more impressive was the piscatorially-focused booth of Janitzio. Unusual leaf-wrapped preparations of tiny fish (not charales, but a word that starts with "T" were among the varied dishes. Another booth had a glass case of some of the scariest carnitas I've ever seen. Yes, not all the foods looked appetizing. There were some well-cooked atapkuas (?) that looked like overcooked baby food with chunks. 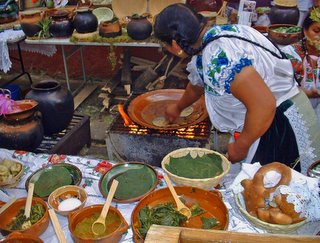 We are just going to have to go back tomorrow.