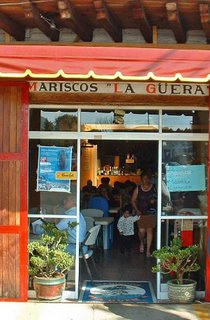 Our car was ready, having been in the shop, Automotriz Garvez, since Thanksgiving. Our neighbors, Sergio and Bety, gave us a ride to the taller. We left suddenly, so I was without camera.*

The boss, Hugo Garvez, handed us the key so we could test drive it. All was well. The bill was $1690 MXP for a complete overhaul of the belts, pump bearings, oil and other lubes, readjustments with $1000 MXP for labor and so on. This was reason to celebrate.

So we went down the road to celebrate by having a late lunch/early supper at Mariscos "La Güera". It's a very nice place; clean and airy. with reasonably restrained maritime decór. It's located at the junction of the Libramiento and Ave. Federico Tena. There are actually two, across the street from each other, but the one on the side closer to centro does not have a "hot kitchen".

I was in the main one the day before, and had had a small octopus cocktail for $2.40, and a large, fresh-squeezed orangeade. I found the sauce in the coctel de pulpos too sweet, but it can be corrected to a degree by squeezing in more fresh lime juice and salsa picante al gusto. There was a large selection of bottled salsas both on the tables, and if that wasn't to your liking, more on the service shelves close by.
The "Naranjada" was very good, bearing no resemblance to the wretched orange flavored drink served on trains back in the 90's. (No wonder passenger trains went out of business!) I used to call that "naranjanada".
Today we ordered a trio of little seafood empanadas, which came out after the main course. One has shrimp and rice ("eh"), the other 2 with a sort of picadillo hash of fish-—good!

Susie got a full platter of Camarones al Mojo de Ajo, drenched in butter with plentiful chunks of garlic; very nicely set up with fresh citrus fruit garnishes and sliced tomatoes, avos and onions, plus rice.

I had a big bowl of Sopa de Mariscos, among the best I've ever had: a dark and spicy, almost gumbo like stock; lots of large shrimp, octopus, squid, "scallops"—which I suspect were cutouts of shark, but good; and a few small oysters. With it came a plate with chopped cilantro and onion, and a half avocado, We were also served some big, crusty rolls in a basket, a lot like a crusty Kaiser roll, but not quite the same cuts on top.

I drank a very well made Michelada, served in a goblet with a salt and chile rim; Susie had a large limonada (same size, and freshly squeezed, of course.) 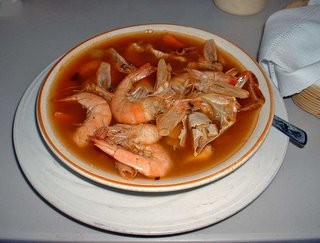 *Since I didn't have my camera along, we'll have to return soon, to eat there again and take some photos.
Updated 12-17-2005

Coming Soon: the Second Encounter of the Traditional Cooks of Michoacán
Taking place December 2-4, in Pátzcuaro and Tzurumútaro.
Posted by Don Cuevas at 7:38 PM