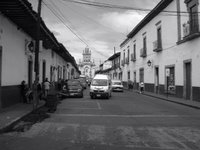 (I'm taking a break from serious obras today, and will republish some notes I just wrote on Mexconnected.com Forum.)

A few notes on a trio of restaurants in Pátzcuaro:

"Parrillada Argentina—El Rincon de 'Che'" will have its inauguration this Friday, Dec. 2, 2005.
It's a small but attractive place on Federico Tena, between the ex-Pemex station and Mariscos La Güera. I stopped at chatted with the owners, Carlos and Aurora (who lived in LA, CA, for over 10 years). He was test-cooking 2 spatchcocked, lemon-basted chickens outside on a large, charcoal grill. They looked good, and smelled great.
They plan to be open from 8 AM until 9 PM. (God bless them!) The dinners, from 11 AM on (if I understand that correctly) will be served in an all-you-want-to eat fashion, a la espada. Possibly some items will be autoservicio, a la buffet. Dining on a shaded terraza is among the plans they have.
I believe this one will be worth watching and trying.
Closed
I made my first visit to Mariscos "La Güera" on the way home. Rick Davis of Restaurante Cha Cha Cha had recommended this place to us, as had others.
This is a popular establishment on the end of Federico Tena, where it joins the Libramiento and the road towards Sta. Clara de Cobre. There's a sister location across the street, which doesn't have a "hot kitchen", the lady in charge told me.

I was blown away. I had been expecting it to be a hole-in-the-wall place, but on the contrary, it's a large and attractively decorated restaurant. There are many attractions, not the least of which is the extensive menu of various seafood preparations. (But one of the unsung attractions for me are the very comfortable chairs. What a treat!) The baño para caballeros was clean, although no seats were included. I also noted the hygienically-oriented cooks, wearing hair restraints and surgical masks.

I conducted a quick lunch test, to restore my strength after marketing ,before heading up to the comida waiting at home. I ordered a coctel de pulpos chico, and "una naranja". I was given a small plate of crunchy tostadas and a Tupperware type container of crackers. The coctel arrived soonest. It was pretty good, although a bit sweet for my taste.
I was beginning to wonder what the delay was on my "orange soda", when I saw arms vigorously squeezing oranges. Soon, I took delivery of an beautiful orangeade, made with fresh juice and some sort of fizzy mineral water or refresco.
I had used the waiting time to look around and see what others were eating. The couple in front of me had a good looking michelada and a great bowl of Caldo de Camarón. The broth made me think of shrimp gumbo. They also had a basket of —get this— big, crusty hard rolls, with what appeared to be distinctive toppings. Based on that, I ordered four para llevar.

They ARE good. They remind me of the huge hard rolls I used to make in my bakery: light crumbed yet crispy crusted.
My entire bill was $43 MXP. I'd return with Susan sometime for a real meal.
I think that they are open from 11 - 7, every day.
Meanwhile, "Ricos Caldos de Gallina 'Doña Mary'", (the original between a paint store (?) and a hardware on the Libramiento, more or less across from the bus station), has opened a new location in the last month, on Calle Arciga (if I have that right), in the row of shops across from the Basilica; but in this case, almost across from Calle Benigno Serrato. It's small, it's simple, and the menu is focused on one dish only: a large bowl of rich chicken soup, with rice and garbanzos, accompanied by bread or tortillas. A few condiments are offered. The individual customizations are in choosing which piece of chicken you wish in your bowl. Service is simple, informal and very friendly. The typical cost for an order is $25 MXP.
Closed! :-(
Posted by Don Cuevas at 5:47 AM