Early yesterday morning, I replied to a post on the Mexconnected.com Mexican Kitchen Forum.

"I had the most fabulous shrimp cocktail at the Plaza in Ajijic, the other day! Does anyone out there have the recipe for the sauce/soup/liquid the shrimp is in? I would love to serve this over the holidays to family and friends. Thank you! "

I answered as follows: "There seems to be some regional variations in preparing this delightful dish. I did a Google search on "Coctel de camarones", and without exhausting the results, I found little that resembled the cocteles I have had.
It seems to start with a simple syrup or clear stock of shrimp shells (I'm not clear on this), and then a thin tomato salsa based on ketchup or tomato puree. Certainly, the cocteles de mariscos we recently enjoyed at Marisquería "El Delfin" in Morelia were not as sweetened as some we had at the Taquería Karina, back in Little Rock, Arkansas.

Chopped onion, some bottled salsa picante OR finely cut, seeded chiles Jalapeños or Serranos is added. The cooked shrimp is added. (Now, of course, I'm speaking of a coctel con todo. We once ordered some cocteles on the Pacific coast, and got a hot concoction in a steaming natural, uncondimented broth. We had those exchanged pretty quickly.)

One recipe I read, I think in a cookbook, (still in its packing box), called for orange soda as one of the ingredients. I think this is exceptional, not the rule.

Typically, cilantro is added. Usually it's mixed into the sauce, but at El Delfin, they topped the coctel with it. Finally, slices of avocado generously garnish the top of the concoction. Freshly squeezed lime juice enhances it overall. Saltine crackers in quantity are the classic accompaniment.

It has only been since Tuesday since we had some, but now I'm craving another."

I just dug a little deeper on Google, and discovered this recipe, which looks pretty good to me:
ahorasi.com
(Right hand sidebar)


The idea of a coctel de mariscos was so compelling, I just couldn't wait. I had to make one, even if it were "fingido".
Not having any seafood on hand, I made up a coctel out of available ingredients, such as hard-cooked eggs, radishes, fresh Roma tomatoes, cooked potato (I might have used some of those red, radish-shaped Mexican potatoes if I'd had any); and avocado. This all landed in a sauce of tomato juice, chile manzano (BEWARE!); chopped onion, cilantro, ketchup, fresh lime juice, Southeast Asian Fish Sauce, (and please, buckle your seat belts and return your trays and seat backs to the upright position as you reach for the bag in the seat pocket in front of you): a dash of maple syrup).

In a large beer mug, I constructed "El Coctel Fingido" as follows: a layer of thickly sliced red radishes; a stack of boiled potato sticks; one hard cooked egg, sliced into half moons; another layer of radishes.

Now: I poured on the spicy-sweet-tangy red salsa slowly, so that it would sink to the bottom without splashing.
I left some room atop to place the large cubes of ripe avocado; then another squeeze of lime juice. and several sprigs more of cilantro.

It looks good to me, and I'll be eating it shortly, after I edit the photos. 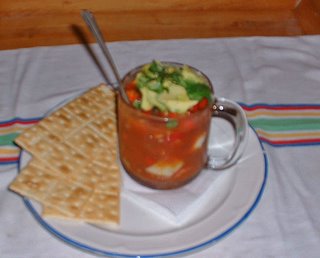 Hasta la vista, muchachos, and I'll let you know how it tastes.

Later: Very good, but one would have to be bastante borracho to think it was made with seafood.
Posted by Don Cuevas at 7:44 AM