With Thanksgiving now past, I now have time to describe the startup of my Holiday Bake-a-Thon. I had a commission to make 5 pumpkin and 3 mamey pies for a friend who has a local restaurant. In addition, we had pledged a Pay de Camote (Sweet potato pie) for a Thanksgiving dinner at La Casa Mariposa, where we had previously lived for 4 months. I also wanted to make a pie or two to share with our neighbors. This year I was much better equipped to handle these enjoyable tasks. I now have ample workspace, a pretty good, capacious GE gas oven, and all the tools I need. 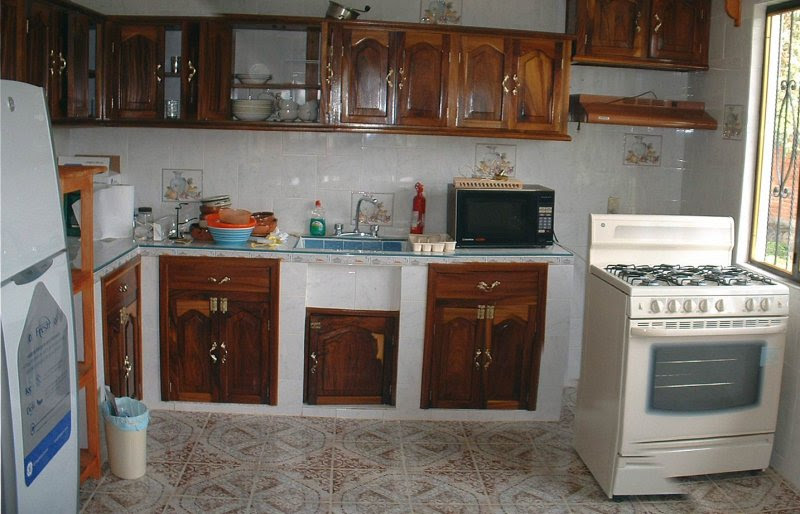 The only tricky part is to locate the ingredients from local sources. For example, the orange colored, round pie pumpkins grown in the U.S. are not found here. Back at the Día de Los Muertos cookout, we had sampled some candied calabasa brought by Doña Livia, which strongly resembled pumpkin in color and taste, if not in outward appearance. She offered to give us some from her mountainous stockpile. About two weeks later, we knocked at her gate, and after some conversation and explanation, she selected 6 of these elongated, striated gourds for us to take home. I promised her that we'd bring her and her family a generous sample when they were done.

That was Monday before Thanksgiving. I almost immediately started to prepare the raw calabasas/pumpkins by hacking them open with a Chinese cleaver and a meat tenderising hammer. Then the seeds were scraped out and carefully saved for later roasting and nibbling as botanas. The calabasa chunks were loaded onto a rack in a deep roasting pan with a couple of inches of water inside, covered with aluminum foil, and baked at 350º F. for an hour and a half.
When cool enough to handle, the flesh was scooped out with a large spoon. This was then strained and pureed in a food mill. This puree was saved in the refrigerated container for later use.

While the pumpkin/calabasas was baking, I started to make the pie crusts.
To be described in part 2. (Oh. Part 2. I got busy again.)
Posted by Don Cuevas at 6:32 AM