Long and Green and Full of Hard Fuzzy Seeds? 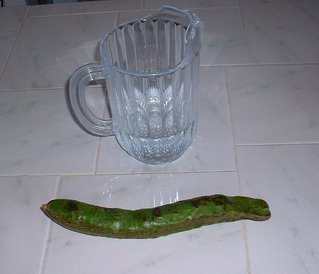 What's long and green and full of hard, fuzzy seeds, sweet but slimy when eaten, and you have to spit out the seeds?

It's the cuajinicuíl, a legume found in the widespread states of Veracruz and in Michoacán.

Yesterday morning, while I headed for the Pátzcuaro mercado, there was a lone vendor selling these green pods. He split one open and offered me a sample. It was a hard, fuzz-covered bean. The idea is to suck on the bean, which is pleasantly aromatic, mild and sweet, but soon the fuzz turns to slime in the mouth.

Although the vendor told me the name, it was too long to remember. Yesterday evening, we brought it up to our friend Sr. Alfredo Río, a retired agronomist who now runs the hotel Mesón de San Antonio

He consulted a large and well used book on the botany of Mexico, written by a Dr. Martínez. After 3 minutes or so, he was able to locate it. Its Latin name is "Inga Jinicuil"
One pod cost me 2 pesos. It was interesting, but I can't imagine what I'd do with a kilo of the stuff. 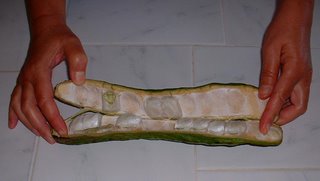 Hello! I love your blog and hope you keep it up. I've always wondered what these things were and now I know!
-Steve (from Rancho Gordo)