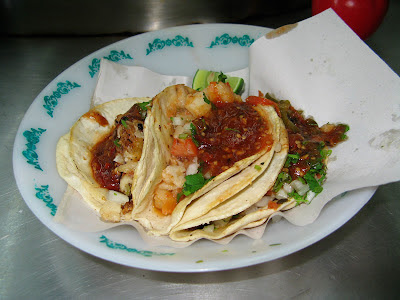 Friday, February 16, we went into Pátzcuaro to shop, and as I was feeling hungry, I stopped at the Birrería Don Prisci's at the esplanada del mercado for a plato chico de birria de borrego. I was only a little surprised to find that they were not serving meat on Fridays. Nor were 90% of the other antojitos and prepared food vendors close by.

This sort of "fasting" seems to entail little denial of the flesh, as the foods are so attractive, delicious and economical.

Don Prisci's was offering 4 Lenten plates: Caldo de Pescado, $35 MXP; Caldo de Camarón $40); Mojarra entera frita, $35 (!); Filete de Pescado Empanizado, $35. The fish plates were attractively served on big, oval platters, garnished with lechuga orejona (romaine lettuce), tomato slices, avocado wedges, ensalada de nopalitos, and a big mound of mayonesa. These plates were much, much more elaborate than the usual, basic bowls and tacos of meaty, soupy birria that they usually serve. As I was not so hungry, I had a bowl of caldo de camarón*, which was quite good, eaten with the huge tortillas de maíz for which Don Prisci's is well known, fresh off the comal.

*Although nowhere near as good as at Mariscos La Güera, where seafood is a specialty, every day. But also costs quite a bit more.

I was watching the set-up and handling of the platters of fish passing from hand to hand, and I had some doubts about the food hygiene on this specific occasion. On the other hand, the birria is served steaming hot and without any raw salad vegetables; unless you choose to put on chopped onions and cilantro. That was another reason I ate the Caldo de Camarón.

On the other side of the esplanada, the taqueros, except for two, had converted their steamed and chopped barbacoa stands into proper pious Lenten fare service. The big taquería, "La Cabaña del Taco" was shuttered. The stand I especially noted was offering chopped fish tacos (I had one, and it was delicious. 5 pesos); rajas de Chile Poblano con queso, pescado blanco (?), or at least, attractive portions of smallish fish fried in a light egg batter. I may have missed other items.


We returned yesterday, Friday, February 23, this time, armed with a camera and an appetite.
We ate 5 tacos each at Taquería 'Nacho's', on the very steps of the esplanada del mercado. I also took photos at Don Prisci's, but unfortunately, no one ordered the impressive whole fried mojarra. I took some photos at a small taco stand on the opposite side. Conditions were very dark, and only a few came out. (That stand is close to La Cabaña de Taco, which was again closed.)

Deeper into the interior of the mercado buldings is an area of humble comedores and fondas. There, right at the base of the ramp, was Fonda 'Esperanza', as well as others. The fare offered at Esperanza's was fascinating.

There was the obligatory menudo , (made in superior way at this fonda; doctor's excuse not needed;-); Caldo de Pescado, Nopalitos en Salsa con Tortitas de Camarones Secos, and an unusual dish, Chiles Güeros en Caldo Rojo con Tortitas de Arroz. This will be a "must try" next Friday for us.(Previously, I thought that the chiles güeros were filled with cheese, but they weren't, and the caldo was o.k but not outstanding.
Updated March 9, 2011
Posted by Don Cuevas at 7:55 AM

Wow! I guess this answer my qyestion whether there are good food spots in Pátzcuaro. I can hardly wait to get there.

Michael -- Did you use a flash for the picture of the plate at the top of your post -- or is it natural light? The last few food pictures I have taken are either washed out (with flash) or eerily shadowed (in natural light). Your food pictures are always very tempting.

Steve, I probably used flash. It's hard to say at this point, as there were so many versions of these photos made; and even more significantly, I run them through PhotoShop Elements, for post-processing. (I'm still learning.)

Have a look at the "mirror" site, http://www.pbase.com/panos/la_comida_dela_vigilia; getting a better idea of th etechnicaal photo details.