A Case of Crabs

It was the season of crabs...
A side benefit of our visit to the Northeast U.S. was that soft shelled crabs were in season. I learned on Mouthfulsfood.com that Avenue Bistro Pub, in Verona, NJ, was offering them on pasta. But when we ate at Chengdu 1 in Cedar Grove the night before, there were soft shelled crabs on the menu, prepared Hot and Spicy with Chili (sic). Irresistible, even though we ordered Hot and Spicy Prawns with Chili as well. In the end, the prawns were better than the crabs. 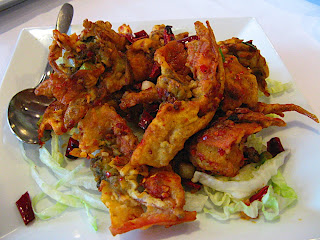 Following that semi-successful meal (less the fault of the restaurant than the widely divergent tastes of the diners' choices.), we joined two old friends at Avenue Bistro Pub. I passed up the second chance for SSCs, and instead, had a great Hanger Steak with frites. My wife had the SSCs, subbing fresh spinach for the pasta. She said it was excellent. 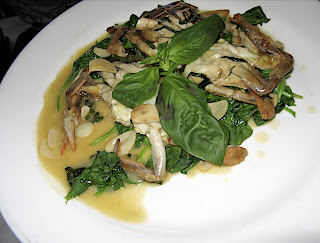 Another crab delicacy are Crab Cakes (CCs). These can be done well, but all too often are masses of breadcrumbs or potatoes, faintly flavored with crab and fried poorly. That, unfortunately, was the case at Reggiano Ristorante, where my single, large, and very expensve CC was guarded by a formidable nest of fried angel hair pasta. Once that barrier was removed, I found a poorly seaoned and fried CC, unredeemed by its underlying pool of "saffron aioli".

I got my good CCs, again at Avenue Bistro, this time nicely done, lightly fried, no barriers, and graced with a red sweet peper remoulade. 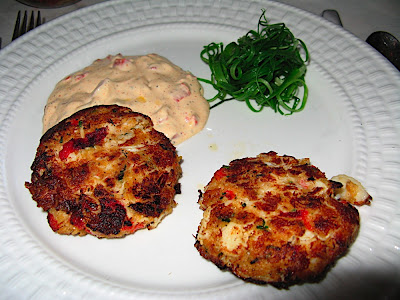 (And now, the real crabbiness comes out, as I prepared CCs at the house.)

My Mom wanted me to make crab cakes before we returned to Mexico. Towards that end, we purchased two, one pound cans of crabs of crabmeat.
Only one day remained before our departure. My Mom planned a meal based on mixed green salad, crab cakes, corn on the cob, green beans and (SURPRISE!) potato salad. I will credit her with preparing all the salads, vegs and sides. I was left only with making the crab cakes. (There was more cooking and food preparation that day, but I won't go into the details here.)
I recalled that the year before, she and I wrangled over a newspaper clipping recipe. I don't recall the gist of the dispute, it it may have had to do with "not over seasoning to the point where you don't taste the crab."
I totally agree with that opinion.
This year we wrangled only briefly, and she more-or-less let me have my way with a recipe I got on the Internet.
Who knows? The only requirement was that "Panko", the Japanese white bread crumbs, be used.
(I did take 3 slices of Pepperidge Farm Hearty White Bread, trim off the crusts, dice, place in the food processor and whirl with the steel blade until they were crumbs. Those were the "filler" inside the CC mixture.)
Here's the recipe I used, for "Best Crab Cakes", from teriskitchen.com
I consider it a very good starting point.
Keep in mind our quantity was doubled, yielding 12 large crab cakes. I'll put my modifications in a colored font.

My Mom's kitchen is compact, and she more or less knows where everything is stored, while I, her usually intelligent son, am generally clueless in that regard. Nevertheless, I manage to make the CC mixture before lunch (a vegetable frittata), between other more or less continuous kitchen tasks, and get it refrigerated.

Later, I patted out the CCs and began to fry them. I would have used two skillets, but the burners were occupied with corn on the cob and green beans. My temper finally exploded as my wife started removing the cleaned dinnerware from the dishwasher, underfoot where I was working. It was necessary, but stressful. Plus, "there are ways of doing things in every family".

But after my crabby outburst came calm. I continued, frying 4-5 CCs at a time, placing them on paper towels in an oven proof dish and keeping them in a 200º oven until serving time.

THEN:
FIRST, the salad.
clear the plates
SECOND, the corn and green beans.
clear the plates (my wife says I was mistaken. We did NOT clear the second plates. But we did eat the vegs as separate courses.)
THIRD, the CCs. Pass the mayonnaise, ummm; Tartar Sauce. Mmm!
I had more salad, which was "noticed".
It was just almost worth the hassle. I ate two big CC's. They were great.
I skipped the baked bananas, as they held no apeel for me. 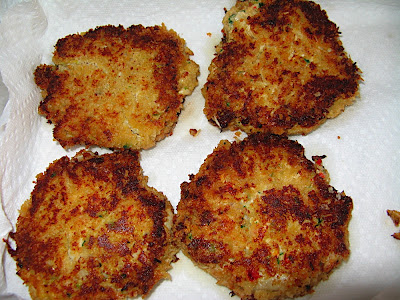 Home made CCs, hecho a mano por mi.
I suddenly realized that I'd blogged a topic of the same or nearly the same title, a couple of years ago: Eat Here And Get Crabs
So it is. No, I'm not obsessed with that affliction. Originally, this post was titled, Crabby In the Kitchen.
Posted by Don Cuevas at 1:20 PM

You are one bad torturer!
Nice pictures, my screen now has lick marks, made before I snapped back to reality!

I love crab cakes, especially with Dungeness crab from the Pacific Coast. However nothing as good as the one I had in Maryland one visit...the only thing maybe better is the lobster up in Maine...our next trip, maybe this year to reconnoiter the fall colors again....breathtaking.
Welcome back!

¡Híjolé, Constantino. You are on top of this Blog Thing.

It hasn't been an hour since I published that one, accompanied by much hand wring and revision.

I just published a new post called, "Lord of the Rings", wch combines reminiscence and greasy-fingered gluttony.
Look at the top of my blog for that.
http://mexkitchen.blogspot.com/2009/05/lord-of-rings.html