A Bellyful of Whole Belly Clams

Another greatly sought delicacy during our visit to the Northeastern U.S. was Fried Whole Belly Clams. Some of you, like us, may have sampled Fried Clam Strips, a dish that resembles short lengths of rubber bands and deriving most of its flavor from the breading and the accompanying Tartar Sauce. Think, "Howard Johnson's". I once worked in the kitchen at a Red Lobster (I'm still trying to compensate for those 9 months), and there, we cooked Clam Strips by dipping the end of a small plastic bag of preportioned, frozen clam strips into the hot fat of the deep fryer, releasing those wormlike morsels towards their final destiny.

(I'm suddenly curious why it's called Tartar Sauce or Sauce Tartare. I associated the Tartars as a tribe of horsemen who tenderized horsemeat by placing it under their saddles during vigorous, rollicking jaunts over the steppes. Thus, the possible origin of Tartar Steak.* They were also fond of koumiss, fermented mare's milk. (This is not an auspicious beginning culinarily.) The Mexican version of Tartar Steak is Carne Apache, a name which has some of the rough and wild associations of Steak Tartare. It's also a food I wil not eat, as served in its unrefrigerated and dubious form at street and mercado stalls. But, I digress.

Whole Belly Fried Clams are a New England Specialty. When I was growing up in and around New Haven, CT, we'd sometimes be treated to a fried seafood meal at the Clam Box at Branford(?), or even better, Jimmy's of Savin Rock, back when it was a parking lot and a stand, with long lines in the summer.

On this trip to Connecticut, we had two Whole Belly Clams ops. The first was at the excellent Maine Fish Market, in East Windsor, CT. Not to miss an opportunity, I started my meal with a shellfish platter of 6 icy clams and 6 oysters on the half shell. A Long Trail Ale was the perfect accompaniment. 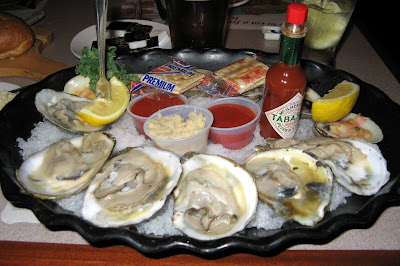 After a small salad came a platter mounded with golden fried whole belly clams (WBC from here on.) There was a mountain of French fries and slaw as well.

(I'm sorry, but I don't have any photos of WBC at either restaurant! What must have I been doing? Eating. I'll Google a photo and put it in here.)

Thanks, I appreciate that.

The clams were excellent. In fact, I liked everything about the meal. well, maybe the Tartar Sauce wasn't great, but it was o.k.) I had to take about a third of the clams and half of the fries to our niece's home, where the next morning, I made a Connecticut version of Hangtown Fry. (Scrambled eggs, potatoes, fried WBCs.) More than you ever wanted to know about Hangtown Fry.

The second WBC op was at Skooter's Restaurant in Windsor Locks, CT. (Mentioned in a previous blog post under "Lord of the Rings".) 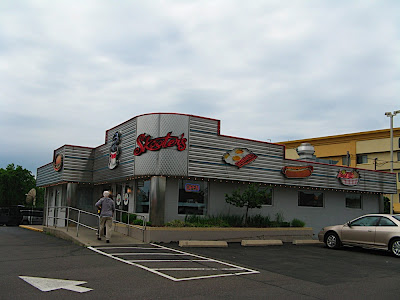 
My wife had an order of clams only, a rather more modest portion, but very tasty and the right size for lunch, before boarding the Amtrak Vermonter train back to Newark, NJ.

This concludes our presentation for today.

Here in Irapuato where I live "carne Apache" is called "carne tártara". My mother-in-law makes it and it is very good. Just don't make it with week old ground beef from Comercial Mexicana. You go to the butcher and ask him to grind up some fresh "carne suave", soft beef like carne pescuezo (neck or throat meat). Take a half kilo and add the juice of three good sized limones (limes) and a half teaspoon of salt and a medium sized onion finely chopped. Mix it up and leave it in the refrigerator for about three hours. Don't use too much lime. Then add some chopped tomato and chopped avocado and serve it on tostadas. Mmmmmmm...!!!

Bob, I would venture a taste if your suegra made it fresh for me.

I only would never eat any from a street stall. It's a disaster waiting to reveal itself.

On second thought, los carniceros sometimes grind pork through the same machine as the beef, which increases the risk factor by a considerable degree. Plus, I doubt that the machines are sanitized in the course of a work day. Better to buy the beef and chop it yourself.

Yummy-- those looked so good. The food is the best part of any travel.

Way back when I worked at Electric Boat I'd stop at times on my way back home at Tom's Dairy Bar in New London.

I can't remember the street name. It was located among a bunch of auto dealers.

This "shack" had whole belly deep-fat fried clams. That was in the late 1970's. I went there in about 1995 and to my dismay the shack was nolonger there.

I haven't found an equal food establishment since.

Those whole bellies were soooo deliscious.