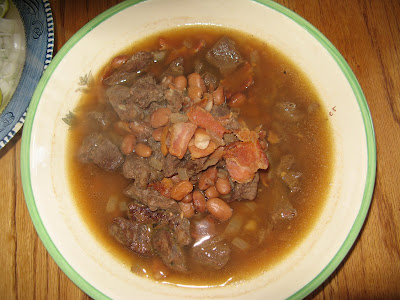 Carne en su jugo is, literally, "Meat (cooked) in its own juice". It's somewhere between birria and caldillo, on their way to evolve into Chile Con Carne, Texas Style. (The latter contains neither beans or tomatoes. However, the recipe for CESJ I used contains frijoles de olla.)


Ever since I read the Mexican Cooking Project #10 on mouthfulsfood.com, for Carne en Su Jugo, I've wanted to make it. I think I made one careless (insouciant?) attempt before, with limited success.

This time, I used Cristina's*  Carne en su Jugo 2, with very few modifications of my own.

One of the keys to the dish is to add no salt until it is almost done, after tasting it. The seasonings and the knorrsuiza de res add a lot of salt. (I actually used Knorr Suiza Costilla Jugosa de Res tablets, and they worked very well).

It seemed to be a boatload of bacon and thus, of fat, but you only live once, and well. The pieces of marinated meat are drained and dried off, then browned in the bacon fat. It made sense to me to first caramelize the cebolletas in the fat, remove them, and then cook the meat, thus adding more flavor from the onions to the meat.

When all the necessary elements are browned, I added the liter of caldo de res made from the tabletas Costilla Jugosa de Res. Follow package directions carefully, as it's always better to start with not enough and add more later if necessary. The meat is then simmered until tender. Surprisingly, it did not take as long as expected. Some cooked frijoles de olla and some of their broth are pureed in a blender and added to the pot.

One of the very important garnishes are cebolletas (young knob onions) or cebollettas de cambray (scallions). These small onions are caramelized in the fat leftover from cooking the bacon and they are wonderful. Next time you are at a taquería, be sure to get some cebolletas with your order. The well browned ones are the best.


The bacon is recommended to be added to each bowl of CESJ at the moment of serving, but in a lapse, I added it to the pot in the last few minutes of cooking. It was still good.

Condiments can make or break a dish. Here the recommended additions at the table are fresh, crisp and pungent radishes; chopped white onion, cilantro, limes and sea salt. We had the sea salt ready, but the CESJ did not need any more salt. 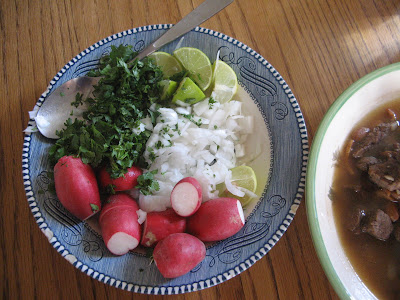 We ate hot flour tortillas as we generally prefer them to corn tortillas, but I think hot, crisp-crusted pan Francés would be good.
(We have found above average pan baguette Francés at the Bodega Aurrerá in Pátzcuaro.)

I recommend a good cerveza clara to accompany the dish, or an agua fresca de jamaica.


Some versions contain tomates verdes or tomatillos. That's something to try the next time I make the dish, and it won't be as long until I do so again.

*Cristina Potter of the excellent Mexico food and culture blog, Mexico Cooks!
Posted by Don Cuevas at 7:05 AM

How about tossing in a hefty dried Poblano to infuse the soup with its slightly bitter and smoky taste? I also like the color it adds - makes the soup seem even more hearty.

Yesterday I enjoyed a chicken-rice soup across the line that featured such. Seems to be a good fit with this recipe, too.

Also, is Knorr's Caldo de Tomate popular there? It's big here on both sides of the border and because it's in granular form, very easy to use. In general, Knorr makes excellent products (this usual shunner of processed foods grudgingly admits).

Knorr's dried vegetable mix is terrific as a base for almost any soup of whatever is hiding in the fridge's crisper drawers.

(Knoor is so successful that it recenty took over Lipton!)

A poblano, (actually an ancho chile when dried) would be good, but it never occurred to me when more or less religiously following the recipe.

I dd use an ancho in the salsa de muchos chiles. Even though "it isn't done", wrote Ms. Diana K.