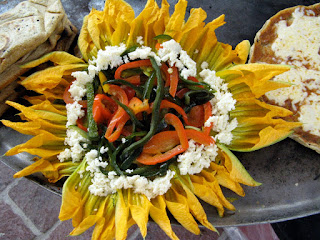 We were just in Guanajuato for our 41st wedding anniversary over a long weekend, and had some enjoyable meals (and some less so.).

Our first stop was Casa Valadez, where we had a pleasant supper in plushly elegant surroundings that belie the moderate pricing. Doña Cuevas had Caldo de cebolla, a very good French Onion Soup, Fettucine con Camarones; I, Tacos de Arrachera, tender and tasty. Other than the superb Flan de Cajeta, nothing that we had was ground breaking, but the food and service were good.

The beautifully appointed restrooms were a plus! Have a peek into the Men's: 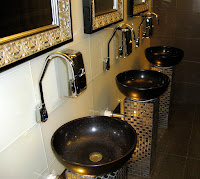 The restrooms broke the scale on the SBRT, Standard Baño/Restroom Test.

Following the advice linked from Rachel Laudan's website, we booked for Saturday afternoon at Las Mercedes, where we had a delightfully memorable, 2 1/2 hour meal. I won't recount the details here, but will expand on that in a separate post. Meanwhile, a preview here. (Scroll down to "Anonimo's" second post.)

Breakfasts at Restaurante Truco 7 (part of our B&B package) were "o.k."; filling but undistinguished. That was very disappointing to us as we had warm memories of the place back in the 90s. The Enmoladas con Queso were dreadful, IMO, as the almost fudgy mole was thickly sweet while the queso, both inside and on top was totally excessive. I was unable to finish it, which is unusual for me.

However, on our first morning at Truco 7, I had a slice of Pastel de Tres Leches, and I'm happy to report that it it fulfilled my fondness for this dessert very satisfactorily. Truco 7's Pastel de 3 L's is among the best ever in México. The coffee is decent if not outstanding.

A small but enjoyable "find" were the antojitos stands up by El Pípila. One cart was already open on the morning of our vist, and the woman's sopes were beautifully done while her tlacoyos eran muy guapos. 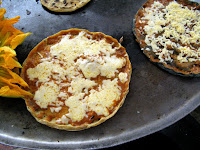 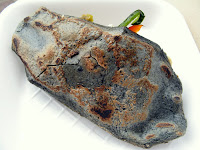 One of the highlights of our visit was riding up towards Santa Rosa, about 30 minutes out of town, with a resident American friend, "Chacho Johnny", where we visited the Conservas Santa Rosa. I recommend the store for its variety of delightful products, low prices, and friendly service.

While in Santa Rosa, my wife enjoyed a roasted elote, served in a fresh corn husk and painted with lime and chile molido. It was a style of elote we'd never seen before. (It was too dry and chewy for my tastes, but Doña Cuevas enjoyed it.) 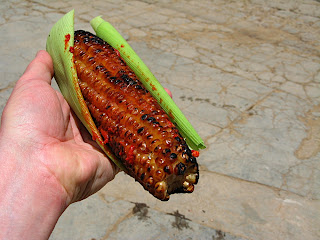 After considering the options for comida, Restaurante de La Sierra (big) or La Cabaña de Lolita (small), we went to the later, off the highway at Puerto Barrientos, just a few kilometers back towards Guanajuato Capital.

I liked the simple, relaxed family country restaurant feel, and our meal bore out the wisdom of my decision. A decision, based in part, on the SBRT; the Standard Baño/Restroom Test. Below, you'll see two very simple facilities, in out buildings, painted appropriate colors. (Spotless and freshly scrubbed, also.) 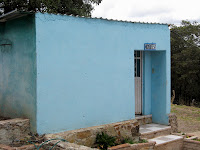 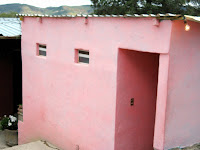 
(Doña Cuevas, perhaps affected by my general cynicism, proposes that the mixotes at Cabaña de Lolita are made up in bulk in a big pan, then wrapped in the foil packets when a customer orders it. She claims that the foil was just too clean of smoke or soot on the outside. I hate to believe that, but it could be true. Personally, I really would have preferred the mixiotes be cooked in the traditon parchment of maguey, pero, así es. Despite that, it was tasty, if rather ridden with bones.)

A specialty of La Cabaña de Lolita is the cecina. It's cut extra thin and cooked very crispy. It will virtually shatter in your mouth. It was lightly salted, if at all.

On our last morning in Guanajuato, we skipped breakfast at Truco 7, and instead, I bought 4 plump, steaming hot tamales from a vendor setting up, on a callejón just off Plazuela Baratillo. $28 pesos, supplemented with some so-so pan dulce from Panadería La Infancia, the one on Calle Alonso.

If we could have gotten better sleep, we would have stayed another night, with the aim of revisiting the Mercado Hidalgo, La Carreta, Cafe Tal, and more.

But we'd had a very enjoyable visit of two full days and part of two others, and we were ready to get home and get some rest.


I realize that I haven't explained the title of this post, "Eating the Mummy". That may happen in my next post. 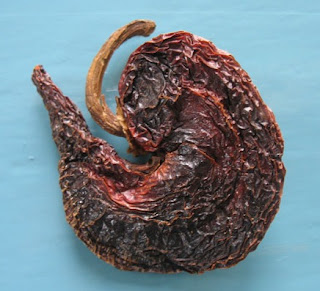 Married bliss for 41 years. Congrats. I haven´t done any one thing in my entire life for 41 years except breathe.

I wish I were in Guanajuato at this moment with an irresistible urge.