We were in Morelia last Wednesday on some business. When it was concluded, we walked with our friend, Rosa, to El Pescador. Loyal readers may recall my review from our first visit last summer. The menu at this restaurant, on the west side of Morelia's Centro, has a considerably ambitious menu than those in our usual haunts.

Last time, I had Huachinango a La Veracruzana. This time, I chose Jaibas Rellenas. In terms of spectacular visual presentation, a great choice. In terms of eating, less great, but not bad. The price was a remarkably low $78 pesos, if I recall correctly.

The stuffing, which seemed to be made of lots of onions, crabmeat (?) a little chile, tomato and sweet pepper was pretty good but not wonderful.  The pure, unadorned crab meat in the more hidden recesses of the body was nice. Some of the claw meat was darker and stronger than the body meat. In all, I'm glad I had it, but probably wouldn't order it again. They also offered Jaibas al Mojo de Ajo (Fried garlic and oil sauce.) 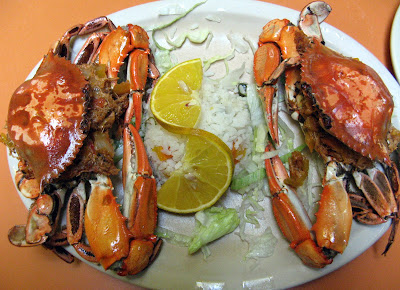 Doña Cuevas had the Camarones Empanizados. She said they were good, if somewhat oily, and because of the butterfly cuts, drier than our favorites at Mariscos La Güera. 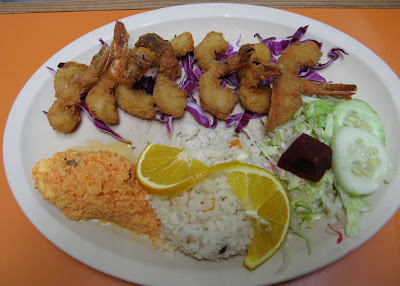 Our friend Rose had the Filete de Pescado Al Mojo de Ajo. The garlic was noticeably browner than what we've had elsewhere, but apparently she liked it. 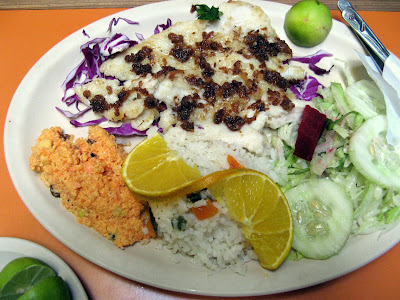 As you see in the accompanying photos, the plates come garnished with a finely ground carrot salad. This item is, to my taste, totally skippable. Across town, at "Mariscos La Jaiba—Boulevard", a similar carrot salad is served, but at least it's shredded and has some interesting texture. But not a big deal. Just skip it. (I see I mentioned this in my last review.)

Also, Rosa had a coctel chico de camarones, served in a metal tulip cup. We had a jarra of limonada and a fair but not great michelada.
Our bill was $461 pesos, plus a tip.

Lots of the specialty dishes at El Pescador have melted cheese on them. I prefer seafood without cheese, but our good waitress was cognizant of that, and helped steer me away from those items.

It's a good restaurant, but read the menu carefully and ask questions of your server. My general rule in Mexican seafood restaurants is that simpler dishes tend to be more satisfactory.

Thanks to our new Star Rating System, we can rate El Pescador for the convenience of our readership.

Good size portions in any case ;-) Gracias for the report amigo.

Keep up the good work, and your valuable service.

Don Cuevas,
I think that the food presentations are very nice, especially the jaiba. I like the way you include good photos.

I think the jaiba is one of my best food pictures, ever.

Another was a pot of moronga with onions on top.
http://picasaweb.google.com/lh/photo/EA7lr3hg1GmhE6-csOz5bQ?feat=directlink