The Asador Bariloche
had been recommended to me by our friend Peter, in Morelia. Yesterday, we had a chance to eat there. It's in Morelia Centro, on Ave. Madero at the corner of Calle Amado Nervo. Seven of us arrived just after the opening time, 2:00 p.m. We were the only diners in the restaurant during the more than two hours we passed in enjoying a leisurely comida. 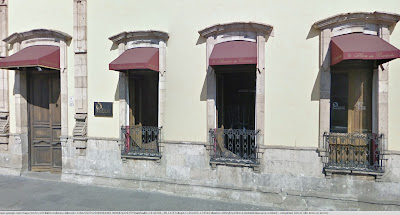 Asador Bariloche is a Mexican interpretation of an Argentine steakhouse.  I'd viewed a promotional video on YouTube that made it appear very upscale. Al contrario, Horatio; it's quite casual, with a very typical Morelia ambience, set in a covered patio. (It was good that the patio was covered, as the afternoon sun was blazing fiercely.)


The menu is long and at first somewhat daunting. Passing directly over the entradas, soups and salads, we homed in directly to the Parilladas and Combinaciones. Both categories are money saving package deals, designed for one to four diners. When I was looking at the right hand column of the menu, the prices made my head to spin. $700 MXN?? A closer look showed that that package was for four diners, and in reality, a considerable savings over ordering a la carte.


Fortunately, Peter was experienced at ordering in this restaurant, so we ended up with a very reasonable cost per person.
The salsas on the table included a fair salsa cruda roja and an excellent chimichurrí, with a distinctive kick of marjoram as well as the usual parsley and garlic. There was also a small dish of herbal requesón (ricotta like cheese).

Peter, Tere, Doña Cuevas and I shared the Combinacíon Cuatro, at $700 MXN, which included a individual choice of soups: Jugo de Carne, Sopa Tarasca or Caldo Tlapeño. Doña C said her Sopa Tarasca was fine. Peter's Caldo Tlapeño looked very good, chockfull of nicely cooked vegetables. My Jugo de Carne was less intense than that which I'd had elsewhere. Nor was it very hot. It had a few dried shrimp added, and was served with a small sauce of garnishes which did improve the soup.
We all ordered various cuts of beef according to our preferences, ranging from an attractive arrachera, served sizzling on a heated comal, to "vacio", a thick chunk of beef, and my "bife de lomo". From our limited Argentine restaurant experiences in Mexico City, my impression is that at el Asador there is a loose interpretation of what these cuts should be. But I won't swear to it. All were in the 300 gram range before cooking.
The main courses arrived, plated very simply on attractive but oversized white plates, accompanied by nothing more than a small broiled chile serrano and a very small patch of  delicious, deeply caramelized, roasted onion. We should have asked for more of the onion.


The steak was thick, tasty and fairly juicy. Doña Cuevas' cut was so rare, she asked for it to be cooked more. It came back nicely charred yet still delicately pink inside. My bife de lomo was resistant to the sharp steak knife, but reasonably tender when eaten. It was quite tasty, although not in the class of similar cuts I'd had elsewhere.
Tortillas came witout asking, but I requested bread. It arrived as small slices of buttered sesame toast and a small dish of herbed garlic butter. Nice, but failing my standards for good bread.
The only accompaniment to the meats was a large salad for four of varied lettuces, sliced tomatoes and thin rings of onion. It was already lightly dressed. It would have been much better if more attention had been paid to selecting fresh lettuce. I was picking out several wilted pieces or worse, before I'd eat it. We should have sent it back.
We also ordered papas fritas Francesas to fill out the empty spaces. They were nicely browned, crinkle-cut, and just a bit greasy.
For drinks, Doña C and I had agua mineral. I was pleased to see it served from a glass bottle, because, in my opinion, there is something cheap about mineral water from a can.
I also had a modest glass of Casillero del Diablo Cab Sauv. It was fine.
The Cuevas' passed up dessert, but some of our amigos had package deals that included postre. Larry received a huge portion of Flan Napolitano, plated on what looked like custard sauce but could have been condensed milk. I got a sample taste and it was a bit denser than regular flan, but good.
José had helado frito, a big ball of vanilla or strawberry ice cream, wrapped in a pastry and deep fried. It was dressed with the mandatory condensed milk and a ubiquitous dusting of cinnamon, atop the obligatory zig-zags of chocolate syrup. The strawberry version was loaded with fruit.

I had a decent espresso sencillo.
The coffee cups and saucers were unusually attractive.
Summing up; Asador Bariloche is a good choice for good cuts of beef. Costs are reasonable if you order Parilladas or Combinaciones for two or more persons. Service was well meaning but unpolished. We had to ask for salad tongs, serving spoons and I probably waited over 10 minutes for my glass of wine. So, in all, the service was variable.

View Morelia's Best Eats in a larger map
Posted by Don Cuevas at 6:42 AM