Imagine a place set in lush green hills, with  a semi-tropical climate and bountiful fruited orchards. Bless it with plentiful waters where families may frolic in pools of fresh water. Then, develop a lovely, park like area near the balneario, and build a beautiful, casual restaurant that takes full advantage of the hillside setting. Enhance it with stone paths and pools and cascades and colorful birds. Decorate it tastefully in a way that harmonizes with the regional cuisine. Offer a short menu of choice foods, made in house when possible: breads, conserves, fresh fruit aguas; uchepos, tortillas and more. Provide excellent yet unobtrusive service.

This has been the history of El Gorjeo de Las Aves En Las Mañanas de Abril, now in its third year of operations.  The parents of this concept in beautiful breakfasting are also the parents of La Mesa de Blanca, situated a few blocks away. They are Sr. Rodrigo Lemus Lemus and Sra. Blanca Vidales Vega de Lemus. While La Mesa de Blanca has achieved some fame in its 11 year history, El Gorjeo de Las Aves En Las Mañanas de Abril, (hereon referred to as “El Gorjeo”), is best known to a local clientele.
La Mesa de Blanca is a full menu restaurant for comida, but El Gorjeo is for breakfasting and brunching. It is a different and delightful experience.
On Sunday, May 23, 2010, we had the privilege of enjoying El Gorjeo. It’s located on a secondary street in Ziracuarétiro. The parking area, to one side of the Balneario Ziracua, gives little hint of what awaits the visitor.
Just beyond, a shaded walkway passes to manicured lawns and gardens then a series of terraces with distinct dining areas. 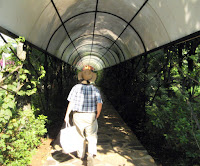 We were greeted by Sr. Rodrigo Lemus who led us to our reserved table. (Really, the reservation was not necessary, but we were reassured to have it.)
It didn’t take us long to scan the short menu. But first, we chose our drinks. Doña Cuevas and I both had unusually flavorsome café de ollas; our friend Ron requested a jarra of the wonderful Agua Fresca de Zarzamora, which we’d enjoyed at La Mesa de Blanca. It is a Platonic drink. Es que decir, no te pierdas la oportunidad de tomar el agua fresca de zarzamora. Es una bebida imprescindible. 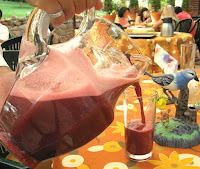 The Café de Olla was enriched with dark, molass-ey piloncillo and lightly spiced. I am usually not satisfied with most café de olla I’ve had elsewhere, but this one was sweetly memorable.
I asked one of our two waiters if they served alcoholic beverages, such as the Tequila with the unique house made sangrita as at Mesa de Blanca, and although it wasn’t on the menu, they procured some for me. I had a Tequila Centenario Reposado. I’m imagining that someone was sent to La Mesa de Blanca to get it, although I don’t really know that for a fact.
The list of platos fuertes is short. (Click image to enlarge.) 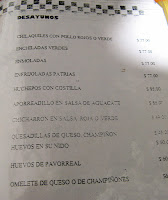 We all chose something different.
Ron ordered the Aporeadillo en Salsa de Aguacate; Doña Cuevas the Huevos Pavo Real (an intriguing name, but actually made with chicken eggs, as our waiter explained the dish.)
I decide on Uchepos con Costillas (One of the most expensive items on the menu at $85.)
While we waited, we sipped and ate the house made breads (note well: there is a charge of $35 MXN for the breads and the marmalades together) with superb mermelada de naranja y mandarina and mermelada de mango. Oddly, butter wasn't served. 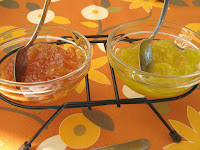 We sat, appreciating the surroundings and the setting. Unlike La Mesa de Blanca and the nearby Hacienda Los Arcos, El Gorjeo does not offer a distant vista. It’s more of a luxuriant, secret, garden where you may breakfast in tranquility. The only minor ripple in the tranquility were the amusing, motion sensitive singing birds on the table. A slight movement was enough to set the bird a-twittering. It was more surprising than disturbing. Thus, “El Gorjeo”. 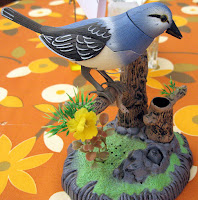 Our plates arrived in good order. They were all very visually striking. The Aporeadillo en Salsa de Aguacate was the most colorful; shredded cecina scrambled with eggs and covered in an avocado sauce. Los Huevos Pavo Real the gaudiest; two eggs up on tortillas with frijoles underneath, in a mild salsa roja. Sort of Huevos Rancheros Go To Town. My Uchepos con Costilla were the homiest; some boneless pieces of pork in the (same?) mild salsa roja, accompanied by two uchepos (sweet, unfilled tamales.)
Ron decided that he wasn't a big fan of dried beef in eggs, after all, but I think he was satisfied with the sauce. Perhaps he should have ordered the Chicharrón En Salsa, (a dish whose texture I dislike).

Doña Cuevas enjoyed the Huevos Pavo Real, a sort of variant on Huevos Rancheros, with the frijoles underneath the eggs rather on the side. The sauce was spicy but not extreme. 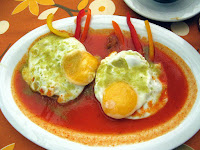 My plate of Uchepos con Costilla was initially unimpressive; just a few large cubes of pork a pool of similar salsa roja and two uchepos lightly covered in crema.  But the uchepos were unusually good. They were made from a coarsely ground, sweetened masa. 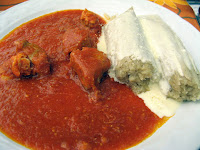 I'm not the biggest fan of sweet foods for breakfast, but what really sparked the dish to life was the addition of some of the remarkable table salsa. This, with the addition of finely chopped nopalitos, was one of the best salsas I've had anywhere. 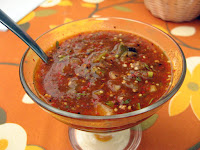 There were a few misses: Ron, who admits to being a exigent customer, ordered a café express and was dismayed to receive a large mug full of muddy, inferior coffee. We told the waiter that it was unsatisfactory, and he took it back, and returned with one marginally better. About this time, Chef Blanca came to our table and greeted us. Ron discussed the coffee with here, and she sent a staff member to her house to bring her personal espresso machine. The third try was closer, but not quite. This speaks well not so much of the coffee, but the desire and efforts made to please the customer.
We left on amiable terms with Chef Blanca, and some photos were taken together. (See slideshow).
Overall, we had a very pleasant experience. I would wish for a somewhat larger selection of dishes, and I think Ron would wish for a better cup of coffee. Stick with the Café de Olla, if you like that style, or the fresh juices, most of which we did not try, and you should be content.
My Ratings (Five stars is the top mark):
Food: ****
Service: ****
Price per person: $-$ 1/2 (One $=approx. $100 pesos)
Ambiance: ***** plus!
Restrooms: Spotless
Posted by Don Cuevas at 5:45 AM

Looks like a nice place for a leisurely Sunday brunch, will definitely have to put it on the list.
One interesting observation, on the coffee and the desire to satisfy the customer....

I think that genuinely the owners who desire to please their customers would accept coffee making lessons, since in reality no one probably taught them the ratio of water to measure etc. I can count on one hand the restaurants in the area that have decent coffee. Especially if you ask for "Fuerte" my personal preference.
Maybe when Starbucks comes to town we may have a decent consistency. Although I notice that the Starbucks in Morelia ( both) tend not to brew bold roasts, must be a Mexican thing of mellow coffee.......

A good meal, swimming in a park setting sounds wonderful to me!!! sia

Senior Cuevas,
These two restaurants are the finest I've found in my many miles of travel in Mexico. What a delightful setting for a casual dasayuno meal. My wife and I have been there several times. At any rate, they are still not getting very many ex-pats as customers and they've asked me to do a review for the michocan.net. I could nowhere near describe the place as well as you have already done. Do you think you could put something in both Morelia.net and michocan.net? These people deserve all the help they can get and they're such fine folks on top of everything else.
Mahalo for you help.
Alohaman (Larry Joseph)

Larry Alohaman; I believe that we've met you and Joy here at the Hacienda Las Cuevas.

I'm quite sure that I linked this review to a post on Michoacán_Net when we first ate there. But it's likely we'll be going again soon, and if we do, I'll write a report for Mich_Net. I haven't been active on MoreliaConnect for a few months for technical reasons. By the way, they frown severely on members cross-posting to other fora.

If choosing between El Gorgeo and La Mesa de Blanca, I prefer La Mesa in terms of food, and El Gorgeo for beautiful setting. But for me, good food always wins out over beautiful ambiance.