We just returned from a visit to the U.S. where we attended a wedding of our grandniece and her childhood sweetheart and a visit to my side of the family in New Jersey. (The food there is another story entirely.)

On our return to Mexico City, we rendezvoused with our friend, Ron Granich, a man of distinguished tastes and very high standards of quality, in the realm of food, and even more specifically, in regard to a properly made demitasse of espresso. He has referred to himself, in only semi jest, as "El Cascarrabia": "The Grouch".

Having Ron along, after an absence of 35 years from México, D.F., would add a new dimension of how we looked at food and drink. Adding to this heady mixture was that Doña Cuevas and I were celebrating our 42nd Wedding Anniversary on the 21st, with a dinner at El Racó on the 23rd.

We arrived midday Sunday the 20th of June, and  the Hotel Milán, in Colonia Roma Norte, we rested and awaited Ron's arrival.

Soon after he checked in, we walked to our traditional welcome home spot, the Hamburguesas a la Parilla, on the corner of Calle Michoacán and Calle Colima. There we each enjoyed a juicy, chargrilled hamburger, eaten while standing, with its juices dribbling onto the sidewalk and, in my case, onto my shirt. I still hadn't learned the proper stance, said Doña Cuevas.

We walked then around a bit in the shady and dignified Porfiriato ambience of Roma, ending up at Cafe de Carlo, on Calle Orizaba, near Av. Álvaro Obregón. There we had various drinks. Ron grudgingly said his espresso was better than many, but still, "overextracted."
I, in my ignorance, enjoyed my café cortado.

The sweet young muchacha standing outside, riffing jazz on her saxophone was an unforeseen attraction. I think that Ron secretly enjoyed this too, although he groused about the excessive sound level of her recorded accompaniment.

After a very brief rest at the hotel, I guided Ron to Mikasa, a large Japanese supermarket on Avenida San Luis Potosí, between Medellín and Moterrey. Ron had spent several years working in Japan so he was particularly interested in Mikasa. Unfortunately, it had already closed at 4:00 p.m. so we bookmarked it for another day.

On Monday, June 21, we walked to the home of our friends Luz Ma and Paco, and with her made a walk through of the Mercado Medellín not far away. En route, we were overcome by an antojo para tacos when we saw the Taquería "El Jarocho", on Calle Manzanillo, at the corner of Calle Tapachula, Col. Roma. It was a serendipitous find, with an attractive and varied menu of taco fillings. We sampled three: Ron a taco de bistec, which was very good, a taco de pollo en salsa verde, pronounced "o.k".
I had a taco of huevos revueltos en salsa rojas; pretty good.


At Mercado Medellín, some notable finds were piñones rojos nacionales, instead of importados from China. The Mexican piñones were delicately sweet. There were some interesting looking, chubby sausages but we couldn't but them as we had two days yet and no refrigeration in our rooms. 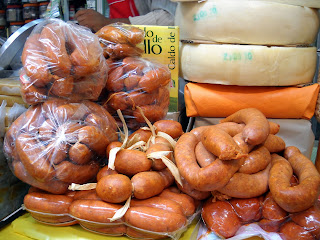 I also bought a piece of the magificent sheets of chicharrón, as I pictured some time ago. These were the extra savory type with squares of fried pork still attached.

After saying hasta luego y adios to Luz Ma, we walked back to Mikasa, where Ron was appropriately stunned by the Tokyo level prices.
"Omigoshi"!
Nevertheless, he did buy some items, while we limited ourselves to some ready to eat snacks, most of which I found boring.

We were still hungry after these snacks, and we wanted some beer, so we walked across Av. Álvaro Obregón to Lucille's Bar and Poolhall, on Calle Orizaba #99. I read about this place on The Mija Chronicles of Lesley Téllez, when Lesley's husband, Crayton, was checking out the local watering holes.

We sat in the shade of the awning and ordered aceitunas preparadas, various craft beers and a couple of "pizzas chicas", one of anchovy, the other of goat cheese and pear. Both were very good, if a bit oily.

We'd hopes to dine that night at one of the Korean restaurants in the western Zona Rosa, but both appetite and energy had faded. Instead, we settled for bowls of Caldo de Pollo "Especial" at Bisquets Obregón, but there was nothing at all special about it it. In fact, it was disappointing, and we'd had better there on other occasions.
The Agua Fresca de Sandía was great, though, and I drowned my thirst in at least a third of the large pitcher.

The next morning, Tuesday, we were up early and in a cab to the "Barrio San Juan". Our first stop, though, was the cafetería "La Piccolina", on Calle Luis Moya, corner of Marqués Sterling, across from the Hotel San Diego. 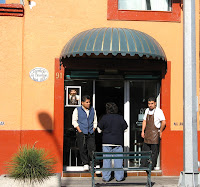 There Doña Cuevas and I renewewed our acquaintance with the very amiable older lady who frequents the cafe. We learned that she sells Avon products. Chatting with her feels like being at home.

Doña Cuevas and I had the usually great cafe con leche, although the strength is highly variable, and Ron had an espresso.
We ordered serious breakfasts; Ron an improvised version of Huevos Albañil, unknown by that name to the waiter or cook; Doña Cuevas and I had Enchiladas de Mole, good, but too rich and too much to finish, so we had the leftovers packed to go, and we left them by a still sleeping homeless man.


It's only a block or two from La Piccolina to the Mercado San Juan, on Calle Ernesto Pugibet, between Luis Moya and Buen Tono, under the shadow of the huge TelMex tower.

We decided to approach the interior of the Mercado in a counter-clockwise direction. Of course, the plan soon feel apart as we discovered new wonders. We circulated first through the specialty pescaderías and carnicerías, of beautiful seafood and grim carcasses of dead bunnies and cabritos. (WARNING: Non vegetarian scenes.) Ron had told us that the paws are left on the rabbits to show that they are really rabbits and not cats. This was confirmed by the carnicero. Frankly, it took some balls  (GUYS! OPEN WITH CAUTION, painful scene.) to walk through the displays.

We lingered long enough to get some photos, then moved on to the Verduras Chinas area, where we examined mysterious greens and where Ron was able at last to buy some of the coveted shiso (perilla) leaves. The price had dropped to 2 pesos a leaf from 5 pesos. What a bargain. Stock up now.

We bought various bits and pieces, including some superior stock and soup base powders, cheeses at La Holandesa, and spices. I saw a better deal on piñones rojos nacionales, so I got a few more.

Next door is the Dragon del Oro, a Chinese tienda, recently expanded and now entered on the corner of the Plaza de San Juan. Most of your general Chinese ingredient needs wil be fulfilled there. I bought dark soy sauce, fish sauce, oyster and mushroom sauce, and dark sesame oil. Some of thse items can also be found at the verduras chinas stands inside the Mercado San Juan.

Let's pause here for a cafecito and pan dulce break and return in another episode.

I wonder if you know how much enjoyment you bring to me by writing about your gourmet adventures?
I appreciate the time and effort it takes, not even considering the work it takes to carefully edit and select the great photos you include in your postings.
I for one would love to see you put together a small group, something manageable 6-8 people to follow you and savor the tastes you write about in DF.
I know you are going to tell me that there are others, so what. It's your keen eye and wit that I would love to experience running in between the traffic in the Big Enchilada.(DF)
(Let's start calling DF, the Big Enchilada)
Every time we go to DF, we wind up simply going to almost the same venues. simply because it is easy and we don't know any better.

Tancho,
Ill be in touch with you personally to talk this over, whenever you get back to home. (Wherever that is.)

Gracias, Felipe. May you have many felicitous years together with Lady Zapata.