Let's pause here for a cafecito and pan dulce break and return in another episode.

In our previous episode, the three gastronomic adventurers had just visited the Dragon del Oro Tienda China, and were in need of a a caffeine fix.

There are several coffee roasters in the vicinity, including this tiny coffee grotto with a display of antique coffee related apparati, between Mercado San Juan and el Dragon. We didn't buy any coffee beans, since Ron was looking to buy only "green" coffee to roast himself. 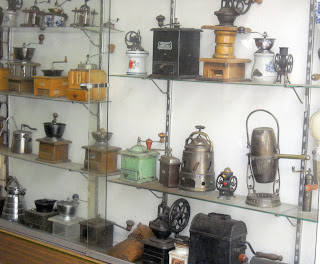 Across the Plaza San Juan and almost catty-corner from el Dragon is the Café El Córdobes, at the corner of Ayuntamiento and López. We sat down and ordered. Ron had his usual café express and I a café cortado. Ron pronounced this the best cup of espresso he'd had. It was near perfect. 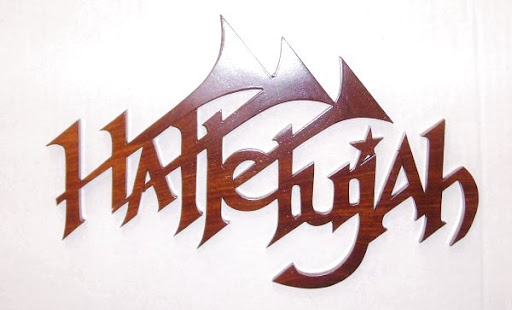 The Heavens opened and radiant light shone forth.
Not only was the extraction excellent, he was able to score several kilos of café verde de Veracruz.

We downed our cups and hastened to Café Villareal, on the opposite corner, on the north side of Ayuntamiento at López. This is a larger coffee roaster but does not serve drinks. Ron got more café verde granos, this time from Chiapas.

Insatiable, he wanted to go to the Café Emir branch I'd seen earlier that day of Google Street View, but after three blocks carrying heavy shopping bags, we gave without locating it. But we did stumble across a Café Villareal coffee bar within a mini mall on he east side of López.

We staggered back to "ground zero", the corner of López and Ayuntamiento  (You can also navigate to it in the embedded Street View, below) and headed to the wonderful spices and dried foods store, El Molino Progreso, at Aranda 26 Bis. I bought a few things, mostly some extra coarse whole wheat flour.
Ron was so dazed by all this that he asked me if the had a product list we could take home. In fact, I'd given him the list back in March and he'd already scanned it to his computer.

El Progreso is next door to the hallucinogenic Pulquería Las Duelistas, but we decided to forego that experience, looking instead for some solid sustenance.
After some discussion, and the purchase of a couple of extra shopping bags (7 1/2 pesos for mine, made from a recycled sugar sack) at a nearby store, we decided on a seafood lunch at the highly recommended stand just around the corner, El Caguamo. It's on Ayuntamiento, between López and Aranda.

Despite Nick Gilman's assurances, we'd had doubts about the hygiene* of this place plus lesser ones about where we'd stash our bags while we ate. The friendly staff put our things inside the door behind us. We then ordered. Doña Cuevas a coctel mediano de camarones. I had the Campechana of pulpos y camarones. They were in a very tasty, unusually thick, orangey-red sauce. Both were $80. Ron went for the Camarones Empanizados, not realizing it was a substantial plateful. It came with the heads fried separately. Sampling a head,I thought it was tasty but a bit oily.
We were also give free cups of spicy caldo de camarón and a taste of the  boss's fried fish cake, which wasn't bad. I don't remember the total bill, but it was reasonable.
My Ratings:
Food: ****
Service: *****
Price: $
Hygiene: I hate to put the blame for our subsequent illnesses on El Caguamo, but there is some circumstantial evidence that we, the two cold coctel eaters later became ill and our friend, the fried shrimp eater didn't. Así es.
Ambience? Well ambience is where you find it. Most people would gve this place a zero in that category. Next to the main stand was this cute little leafy dining bower. 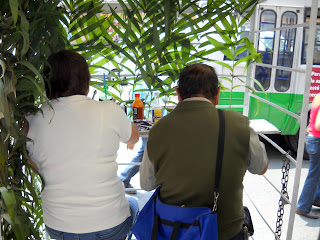 But, what about dessert, you ask? Amazingly, on three separate visits we'd missed the excellent Panadería La Pilarica, on Calle López, just a few doors south. (How can there be so many wonderful food places in such a small area?) I'd only seen La Pilarica on Google Street View that morning.


View Mexico City, D.f. in a larger map, or play with this built-in street view. Click the cross in the upper right corner to expand to full screen. Explore el Barrio de San Juan from your computer!

Look at this fabulous, goodies filled bakery window close up: 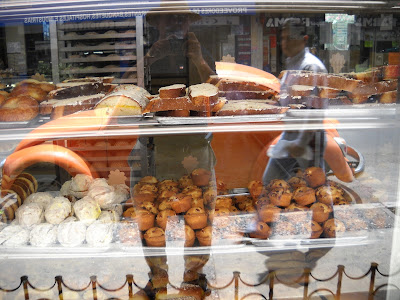 There's much more, and better, inside. I bought a fancy box, $12 MXN extra, to put in a selection for Luz Ma and family. I sampled only one item; a extra tall cylindrical cupcake with coarse sugar on to. It was rich with cream but had no filling.

After, we wisely took a cab back to the Hotel Milán, where la Sra. and I rested, but, unbeknown to us, Ron had returned to Mikasa in a feverish quest, to slake his lust for umeboshi and kakeage.

Wee had a reservation at El Racó  at 7 that evening, for our 42nd Anniversary celebration dinner. I'll describe and review that separately.
Posted by Don Cuevas at 5:58 AM

One good reason why not to live in DF, I would want to eat and check out way too many places.....