El Racó, a Catalán restaurant, located at the north end of Parque México in the lovely Colonia Hipódromo-Condesa, was the dining highlight of our recent visit to Mexico City.

I'd spent some time studying the online menus of what it bills as "cuina del mar y muntanya". I incline more to mar than muntanya, so I was attracted by the fish specialties, notably the signature "Huauchinago a la Sal". It's a a brilliantly simple dish, depending on the freshness of the fish for its success rather than complex sauces. But back on the muntanya, there was tempting Magret de Pato en Salsa de Chocolate". What to think of rare duck breast in a sauce of chocolate? Our friend, Ron, was to find out.


Under Entradas, I was not tempted by Pa Amb Tomaquet, something like bruschetta, although it's undoubtedly good. I prefer to order dishes that I can't duplicate at home. No, the soups were alluring, especially Sopa Fría de Pera y Yogurth con Jamón Serrano; or Ajo Blanco, a famous white "gazpacho" I'd wanted to try for a long time.

Doña Cuevas, Ron and I arrived early at the intimate  and simply decorated restaurant, where we found a table set for our group of six by the front door. We asked for it to be changed, and it was readily done.

I asked our host, for a drink representative of Catalunya. He suggested Orujo, a white distilled herbal liqueur. On the rocks and with a glass of mineral water to the side it was sweet but not cloying.

Soon, Luz Ma, her husband Paco and their daughter Sandra joined us.

The service was gracious, quiet, warm and non-intrusive. Our questions were answered with grace, and the service was superb. Also, the waitstaff were some of the most handsome men we'd ever had the pleasure to serve us. We noted a woman chef but don't know if she is the head chef. (I saw on the website that the chef is named "Cuevas" also, but we're not related.)

A basket of good but not great whole grain bread was on the table along with a crock of pleasant butter.

Doña Cuevas and Ron both had the Sopa Fría de Peras con Yogurth y Jamón Serrano, a superb dish, impeccably balanced among its elements.
This was perhaps the outstanding dish of the evening.


My Ajo Blanco, served in a glass with a small lens of oil on top, was disconcerting in appearance. The taste was of garlic and a subtle backdrop of almonds, as it should be, but it wasn't something I'd order again. It was just too much white emulsion for me, and the halved wite grapes in the glass didn't offset the persistent emulsion effect. 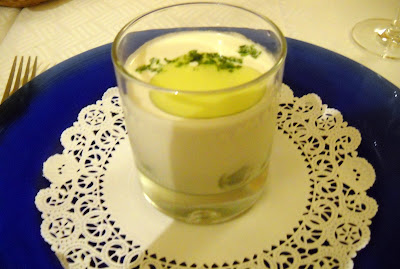 Doña Cuevas ordered a favorite entrada, Pulpos a La Gallega, which came in a striking presentation that parted with tradition. It was a large tentacle on a platter, with three small square ramekins containing olive oil, sea salt and crispy fried onions, looking oddly like chile flakes. The traditional boiled potato was absent.
(Sorry, no photo.)
She skipped a main course in order to save room for dessert.

Ron ordered the Magret de Pato en Salsa de Chocolate, a daring dish. He reports at although the duck breast was perfectly cooked rare, the combination wth the bitter chocolate sauce did not work well together.

I went against my rule to never eat fish with cheese nor overly complicated dishes, and had Trucha Salmonada Rellena de Queso de Cabra, Setas  y Espinacas. This was delicious and rich; in fact, so rich with goat cheese that I couldn't finish it. Although it was very good, I would have preferred less cheese and a lot more spinach. The "chiste" was the small mound of green paste, looking very much like wasabi, but in reality, a very Mediterranean pesto of green olives and almonds. The accompanying slice of laminated potatoes was too rich and texturally too soft to balance out the rich fish and its filling. 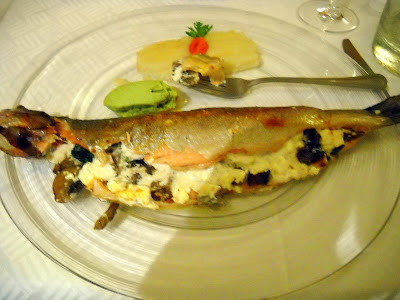 Sorry, I don't recall what our other friends ate, except I do remember that Sandra had chicken stuffed with grapes, in three mounds, covered with a purplish (wine?) sauce; and Paco had Carpaccio de Salmón— an appetizer of what appeared to be smoked salmon presented very nicely.

Dessert!
Sandra, a confessed chocaholic, had this impressive Mousse de Chocolate with disks of apple crunch atop.


Although it looked a bit messy to me, she enjoyed its relative lightness.

I was tempted by several desserts, but the exotic nature of Helado de Azafran con Crujiente de Portobello y Avelanas.

The ice cream was quite rich and pleasant, although the saffron was exceedingly subtle, and the Portobello crunch lent little to the dish.

In honor of our anniversary, we were treated to a round of after dinner wine by our host, Sr. Héctor H. Ugalde Ayala. He regretted that the house made pacharán was not available, but it would be, in time for my birthday, at the end of September...

Thanks to the very good food and kind and gracious service we enjoyed, we would definitely return to El Racó, although choosing other dishes from the menu. Next time, Huauchinango a la Sal?

My favorite neighborhood place since I live just around the corner! The chef is Alfonso Cuevas who also did the painting thats hung on the left when you enter.

The Huachinango a la Sal is my favorite dish and I absolutely love the Bomba Sorpresa - the liquer is Pacharan/ Patxaran from the Navarra region of Spain and made from blackthorn or sloe bush berries and a digestif ....

Ruth, thanks for your enthusiastic comment. We hope to dine at El Racó again.