We knew exactly where it is. We’d walked by many times. In the last three years, we’d read many glowing reviews of the restaurant and its cuisine of the Tierra Caliente. For some reason, we often planned to eat there but something would always come up to prevent it.
On Saturday May 14 2011, we had an opportunity to accomplish our mission. We were staying just a few blocks away.
We’d just come from the underwhelming Festival de Cerveza and the afternoon was very hot. After a short rest in our room, we walked down to the Fonda. We made every effort to slowly walk on the shady side of the street.
The restaurant's cool interior welcomed us with our choice of seating in one of the two patios or in the dining room. I simply asked for a table “donde el aire es más fresco.”, and our wish was granted.
We ordered a pitcher of limonada and I a mezcal de Tzihuaquio. The mezcal came with coarse grained salt and lime slices. It was good, but I prefer that of La Mesa de Blanca. We were brought an attractive but very mild salsa as well as a bowl of brothy beans. The beans were simple, earthy and delicious.
The menu was presented and I knew right away that I’d like the food. The menu was divided among entradas, especialidades and platos fuertes. I’d read of the toqueres, a corn griddle cake, so we ordered some for an appetizer.
They arrived quickly in a cloth lined basket alongside excellent hand made tortillas. There was also a bowl of jocoque, a yogurt like cream with a few curds in it. It was the perfect accompaniment to the rough corn goodness of the toqueres. (I thought of blinis.) They were so good that I’m planning on making them at home.
We looked over the menu of especialidades and I decided on “frito”, which is short for pork backbone cooked in a spicy adobo; and Doña Cuevas chose mole de pollo.
In the interludes, I explored the restaurant. There are two main dining rooms and two patio dining areas. The back patio has a lovely water feature, but the sun was too strong to linger there, even with umbrellaed tables. 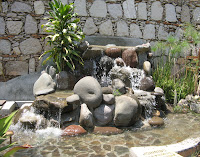 The restrooms were in an attractive alcove with hand washing sinks. 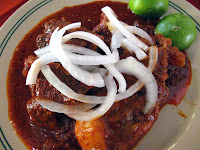 Our food arrived quickly. The frito was big on flavor. Behind the combined puree of chiles, cloves and other spices were apparent. The mole de pollo was a chicken thigh without skin (YES!) in a large soup plate of rich but subtle mole, neither too sweet nor too picante. The mole came with yellow rice, which I coveted, so I ordered a side of it. It came as a portion big enough for two and was very good.

We happily wiped our plates clean of sauces and I nibbled the meat from the bones.
There’s a short dessert menu, but we were too full to be tempted by the typical, homey sweets such as flan, chongos, cheesecake, pastel or peach half in syrup. (I’m always puzzled by the last item. To whom does it appeal? A kid!)


Our bill was $277 pesos, plus tip.
Here’s the scorecard:
• Food: ****1/2
• Service **** Just a little too quick on the draw to write an order, but very attentive. I would have preferred a somewhat more relaxed pace.
• Ambience: **** Spanish Colonials at home. Pleasant but unpretentious.
• Price: $-$$ A bargain.
• Restrooms: didn’t go in, but the hand washing area was attractive, clean and properly supplied.
• Live music advisory! A trio of folk musicians, “Caracuaro” entered just as we were leaving, and really, they were quite good. They were asking at each table whether they would like a song.
Fonda Marceva
Abasolo No 455
Colonia Centro
Morelia, Michoacán
Tel: 312 16 66
Opens 8 a.m. closes 6 p.m. Closed Mondays. Serves breakfast also.
Website

View Pátzcuaro and Morelia Best Eats in a larger map
Posted by Don Cuevas at 4:16 AM

Nice write-up. Probably give it a shot one of these days. But I loathe live music in restaurants.

What, no more Goggle map links?
Looks like a nice place, will have to try it one of these days...Is there parking near? Full Bar? I guess an option would be to park somewhere else and grab a taxi,
Are you going to report on the beer festival or was it not worth it?

Felipe, get there early enough and during the week and you may not have to suffer live music. At least they didn't come up behind and start frailing away.

Tancho, I haven't been able to embed Google maps for a while now. I'm looking into it.

Don, That is life! I didnt know the
toqueres, every day I learn something!

I wished to go, and eat frito like you! And the check!

Tancho, I stumbled upon the Embed Map feature in Google Maps, so my post now has one zoomable, draggable map at the bottom.

Other features may be enabled when they become available, such as Street View. I included my own photo of the street and building.

THANK YOU, The map is Great!, Kind of puts it all in one prospective to your hideout joints. It will make it easier to find when I try to uncover those places.
Makes it all come together.
I for one appreciate your hard work in putting it together.

My pleasure, Tancho.
Note that the Calle Abasalo just south of Calle Aldama is really continuous, (all the way from Plaza Carillo northward to Av.Madero, where it becomes Guillermo Prieto.), not interrupted as shown on the Google Map. The error has been reported to Google.